A look back at the stories in April that made the headlines on Consortium News.

The worsening crises in Syria and Gaza dominated Consortium News’ coverage in April.

Last month also saw publication of numerous tributes to the late founder and editor of Consortium News, Bob Parry. A memorial for Bob was held in Arlington, Virginia on April 14. Several tributes (from John Pilger, Brian Barger, Joe Lauria and Don North) were posted on the site and a video of the entire event was made available on April 27.

Donald Trump’s April 14 air strike on Damascus was the focal point of the Syria coverage. In the lead-up to the strike Consortium News zeroed in on two aspects downplayed or totally ignored by corporate media: the legality of the strike and the question of evidence. In the aftermath of the strike, we focused on the continuing lack of proof of a chemical attack in a Damascus suburb—Trump’s supposed casus belli, or as Ray McGovern quipped, a casus belly laugh.

After a supposed chemical attack on April 7 allegedly killed dozens of people in the Damascus suburb, and talk of a U.S. military retaliation stirred in Washington, Consortium News published an appeal by a group of international lawyers on April 11, arguing that the U.S. could only act in self-defense under Article 51 of the U.N. charter or with U.N. Security Council authorization. The Trump administration sought neither.

Instead Trump toyed with the idea of conflict with nuclear-armed Russia in a series of tweets, the most alarming of which was on that very day, April 11: “Russia vows to shoot down any and all missiles fired at Syria. Get ready Russia, because they will be coming, nice and new and ‘smart!’ You shouldn’t be partners with a Gas Killing Animal who kills his people and enjoys it!”

On the same day, as Trump contemplated his “nice” strike, we also ran an article from University of Illinois Professor Francis Boyle about America’s “Unlimited Imperialism,” based on the teachings of Prof. Boyle’s mentor Hans Morgenthau. The day before, on April 10, Consortium published a piece on the dangers of nuclear confrontation with Russia, as well as an excerpt from Daniel Ellsberg’s new book, “The Doomsday Machine.”

We took a look at America’s Long History of Trying to Determine Who Rules Syria in a column on April 12 by Caitlin Johnstone. The following day a memo to President Trump from the Veteran Intelligence Professionals for Sanity was published, urging Trump to obtain evidence of Syrian culpability and follow U.S. and international law before deciding to commit an act of war.

On the next night Trump attacked. We published a quick reaction to the strike, pointing out that chemical weapons inspectors from the Organization for the Prohibition of Chemical Weapons were due a few hours later to arrive in Syria to begin their work to determine whether chemicals were even used in Duma. By contrast, corporate media wheeled out ex-generals, many with undisclosed military industry contracts, to tout the hardware the U.S. had employed in an advertisement masquerading as news analysis. The issue of evidence and legality was hardly raised in mainstream reports.

In the days following the attack, Consortium News ran pieces from Norman Solomon calling the strike a salute to the “Russia-gate faithful;” first-time writer Barry Kissin wrote on Defense Secretary James Mattis’ 24-hour about-face from opposition to support for the strike; two pieces were published on reports that victims in Duma had suffered from smoke inhalation rather than chemical weapons; and another on the possible role of the White Helmets in the chemical weapons story.

Lawrence Davidson penned a commentary on April 19 exploring the psychological state of leaders who resort to force in the wake of the Syria strike. 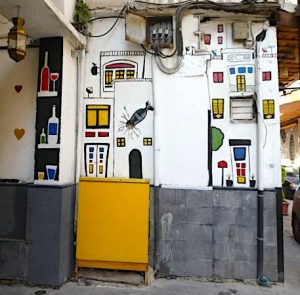 A report, special to Consortium News, from Damascus on April 27 described life in the Syrian capital after the defeat of jihadists in nearby Ghouta. The rebels had been firing rockets into Damascus for the past seven years. The same day we ran an interview by Dennis J. Bernstein of weapons inspector Scott Ritter, who refuted U.S. government claims of a chemical attack.

On April 29 we published the first part of an in-depth analysis by As’ad AbuKhalil, his first piece for Consortium, on the U.S. role in Syria from before the crisis, and how mainstream media suppresses American responsibility for the bloodshed there.

Marjorie Cohn wrote a commentary on April 8 in which she argued that Israel should be brought before the International Criminal Court for its actions in Gaza. And David William Pear, examining the plight of Gazans, wrote on April 20 about the difference between “’Worthy’ and ‘Unworthy’ Victims.”

The site published several pieces on the ongoing deterioration of U.S.-Russian relations and the dangers that entails. Paul Fitzgerald and Elizabeth Gould wrote an in-depth, two-part series on how neoconservatives grabbed power behind the scenes and targeted Russia.

Ray McGovern covered a story that was completely ignored by corporate media: a criminal referral of Hillary Clinton, James Comey and others in the Russia-gate affair.

Will Porter also wrote on April 18 about increased tension between the U.S. and Russia that would result if a new move by Ukraine to join the North Atlantic Treaty Organization was realized. And Gareth Porter delved into the mystery of the poisoning of a former Russian double agent that the British government has used to ramp up already tense relations with Russia, without offering any solid evidence.

On the 50th anniversary of the assassination of Martin Luther King Jr. on April 4, Margaret Kimberley, of Black Agenda Report, in her first piece for Consortium News, explored how King’s legacy has been betrayed. Don North, a former correspondent for NBC News, recalled how he left the violence of Saigon to arrive in Washington a day later as the riots in reaction to King’s death started to spread. And William F. Pepper, lawyer for the King family, and Andrew Kreig, marveled at a story in The Washington Post that actually reopened the question of who killed King.

Joe Lauria is the Editor-in-Chief of Consortium News.

11 comments for “Month in Review: Syria, Gaza, Russia and Tributes to Bob Parry”