The dominant US. media narrative says only the Syrian government has killed anyone during the seven-year conflict while the US role in Syria’s nightmare is blacked out, says As’ad AbuKhalil in the first part of this Consortium News commentary.

The US government—under Barack Obama and Donald Trump—has managed to exonerate itself from responsibility for the carnage in Syria and the prolongation of the war there. Media of the left and right (those ideological distinctions are meaningless when it comes to the coverage of the Syrian war in the US) have contributed to a narrative that basically presents the US as an innocent bystander to the bloodshed in Syria.

Worse, even when the US clearly engages in bombing which results in high rates of civilian casualties, the US media and the public attributes benevolent motives to the US—first to Obama and then to Trump. You have to believe that Trump orders bombing of Syria (or “bombing of Bashshar,” as US media like to say, implying that US bombs and rockets don’t fall on innocent Syrians) because Trump is moved by scenes of suffering. For this bizarre narrative to set in, it was necessary to engage in falsification and propaganda that far exceeds the propaganda of any party to the conflict. Far from being an outside party, the US has been heavily involved in the Syrian war from the very beginning—and most probably even before that.

The US government (and the compliant media—from the left to the far right) established a convenient explanation for the Syrian conflict: that the US and its allies (some of the most despotic regimes on the face of the earth in addition to the Israeli occupation state) have not contributed to any of the killing in Syria. All the killing in the civil war, this explanation goes—and it has become a civil war, albeit with regional and international dimensions like the Lebanese civil war—has been perpetrated by foes of the US and Israel. 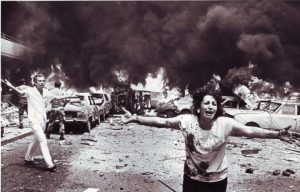 A woman looking for her children in the aftermath of a powerful bomb that blew up in Tariq al-Jdideh in the mid 1980s. (Photo: Khalil Duhaini)

According to this scenario, none of the killing in Syria can be even blamed on the Syrian “rebels”—which also is a convenient label intended to hide the clear Jihadi ideological doctrine of such groups. For example, the “rebels” in Yarmouk are specifically Al-Qa`idah and ISIS, while the “rebels” in Idlib countryside are Al-Qa`idah—but there’s no need to classify them lest the dominant narrative is disturbed.

Because many of those rebels fit into the same camp where the US is located, they can’t be blamed for the carnage. The Syrian government and its allies are solely responsible, according to this narrative. If you suggest otherwise (i.e. that Syrian rebels and their sponsors are also responsible for war crimes just as the Syrian regime, without entering into the question of numbers, because we don’t know yet who-killed-whom or how-many because there is no official tally of the victims, and it is unlikely there ever will be one—just like in Lebanon’s protracted war) you are accused of working for the interests of the Syrian regime, Russian intelligence, and Iranian mullahs.

It Started With Supporting Damascus

US responsibility begins with its support for the Syrian regime over the years. The US and Syria were not always enemies—all stories to the contrary in the US, pro-Zionist press notwithstanding. The US has been on the same side of regional conflicts on many occasions with the Syrian regime. In 1976, Damascus intervened in the Lebanese Civil war (on the side of the right-wing death squads of the Lebanese Forces—which were armed and sponsored by the US, Israel, Saudi Arabia, and some European governments). When Syria intervened to crush the alliance of the Palestinian resistance movement and the Lebanese left, it did so with the full knowledge and support of the US and the Saudi government—we now know from declassified US archival documents.

Syria sought and received US blessing for its intervention and a pledge that Israel would not obstruct it. Even before the Lebanese war, we now know from US declassified documents and/or Wikileaks that the US and the Syrian regime (mostly through the Syrian chief-of-staff, Hikmat Shihabi, and others) worked closely against underground Lebanese communist revolutionary cells like the Arab Communist Organization (whose leader, `Ali Ghadban, was executed by the Syrian regime) as well as the Lebanese Socialist Revolutionary Movement (which stormed the Bank of America in Beirut in 1973, and sought $10 million to support the war effort against Israel).

Long before Syrian regime’s coordination with the US to go after those accused of Islamist radical violence, both governments worked against radical leftist groups even when the Syrian regime was ostensibly aligned with the USSR (of course, the relationship between USSR and Syria reached a crisis point in 1976, and the Syrian government underscored that state of relations in trying to win US support for its role in Lebanon).

But the relationship later soured between the US and Syrian governments in the wake of Sadat’s trip to Jerusalem in 1977. The Syrian government felt, rightly, that the US-Israeli alliance wanted to achieve peace according to Israeli terms and without having to insist on full Israeli withdrawal from those territories which were occupied in 1967. (None of the Arab regimes, including the Syrian, by 1977 were no longer really concerned over those territories of Palestine which were occupied back in 1948).

US and Syria Come to Conflict 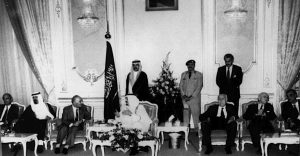 The relationship between the Syrian government and the US reached the point of conflict in 1982, when the US sponsored the Israeli invasion of Lebanon and then forced Lebanon to sign a humiliating peace treaty with the Israeli government in 1983. Syria was at odds with the US and the Phalange-installed government and it supported Lebanese foes of the Amin Gemayyel government. As is well known, the US deployed forces in Lebanon between 1982-1984 (in fact, the forces were never withdrawn but merely “redeployed” off the coast of Lebanon in 1984, according to Ronald Reagan’s announcement at the time). During this period, the US and Syria were in direct military conflict, and the US lost a jet over Syria, and a US pilot was captured.

But the conflict did not last long, as the US and Saudi Arabia worked to arrange for Syrian re-entry into Lebanon in 1987, and a year later the Ta’if accords were reached, where the Syrian regime was basically permitted to control Lebanon in return for Syrian military and political support for the US war on Iraq in 1991. At that time, the US was close to the Syrian-Egyptian-Saudi axis in Arab politics, which lasted throughout the era of Hafidh Al-Asad. There is much about the US relationship with Syria during that era that we don’t know about, regarding coordination in the fight against “terrorism” despite differences in definition of terrorism between the two sides.

The era of Bashshar Al-Asad didn’t completely end Syrian coordination with the US. The Syrian regime, just like other Arab regimes, worked with the US to share information about “Jihadi” groups and even helped in the torture of individuals deemed dangerous by US intelligence agencies. Yet, the two countries had many disagreements especially in the area of the Arab-Israeli “peace process”. But the real conflict between the two sides began to build up right after the US invasion of Iraq in 2003.

55 comments for “The (Unrecognized) US Contribution to Bloodshed in Syria”