In the second part of this two-part series, Paul Fitzgerald and Elizabeth Gould explore how neo-conservatives, behind the scenes, took control of U.S. foreign policy. Part One can be found here.

By Paul Fitzgerald and Elizabeth Gould

In the months and years following the Arab-Israeli war of October 1973, the issue of Israel and its security would become so enmeshed in American policy as to become one and the same. The lesson of October 1973 that détente had succeeded in securing American and Soviet interests, was anathema to the entire neoconservative agenda and revealed its true hand.

At the time a majority of American Jews were not necessarily against better U.S.-Soviet relations. But with the forceful hammering of influential right-wing neoconservative pundits like Ben Wattenberg and Irving Kristol and the explosive manifestation of the Evangelical Christian Zionist movement, many of Israel’s liberal American supporters were persuaded to turn against détente for the first time.

According to the distinguished State Department Soviet specialist Raymond Garthoff’s Détente and Confrontation; “Analytically and objectively the American-Soviet cooperation in defusing both the Israeli-Arab conflict, and their own involvement in a crisis confrontation, may be judged a successful application of crisis management under détente.” But as Garthoff acknowledges, this success threatened “Israel’s jealously guarded freedom of action to determine unilaterally its own security requirements,” and set off alarm bells in Tel Aviv and Washington.

With Richard Nixon on the ropes with Watergate and Vietnam dragging to a conclusion, American foreign policy was open to external pressure and within a year would fall permanently into the hands of a coalition of pro-Israel neoconservative and right-wing defense industry lobbying groups.

A Crusade to Control the Mideast

These groups such as the American Israel Public Affairs Committee (AIPAC), the Jewish Institute for National Security Affairs (JINSA), the American Security Council and Committee on the Present Danger would set about to make American interests and their own personal crusade to control the greater Middle East, interchangeable. 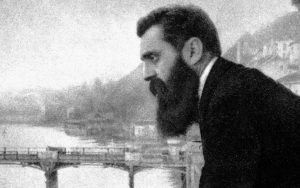 Theodor Herzl on the balcony of the Hotel Les Trois Rois in Basel in1897.

The issue of U.S. support for Israel, its neoconservative backers and its dedicated anti-Russian bias has a long and complicated history dating back long before Theodor Herzl’s19th century Zionist Project. Zionism was not instilled in American thinking by Jews, but by 16th and 17th century British Puritans whose sacred mission was to reestablish an ancient Kingdom of Israel and fulfill what they believed to be biblical prophecy based on the King James Version of the bible.

Britain’s Anglo/Israel movement found common cause with the British Empire’s 19th and early 20th century political goals of controlling the Middle East through Jewish resettlement of Palestine which culminated in the Balfour declaration of 1917. This long term plan of the British Empire continues today through American policy and what has been dubbed the Zionist Project or the Yinon plan.

Add the 700 million strong worldwide Evangelical movement and its 70 million Christian Zionists in the United States, and American foreign policy towards the Middle East becomes an apocalyptic confluence of covert agendas, ethnic grudges and religious feuds locked in permanent crisis.

It has been argued that the neoconservative’s slavish adherence to Israel makes neoconservatism an exclusively Jewish creation. Numerous neoconservative writers like the New York Times’ David Brooks tar critics of Israel as anti-Semites by accusing them of substituting the term “neoconservative” for “Jew.” Others argue that “neoconservatism is indeed a Jewish intellectual and political movement” with “close ties to the most extreme nationalistic, aggressive, racialist and religiously fanatic elements within Israel.”

Although clearly acting as a political front for Israel’s interests and an engine for permanent war, neoconservatism would never have succeeded as a political movement without the support and cooperation of powerful non-Jewish elites.

New America Foundation co-founder Michael Lind writes in The Nation in 2004, “Along with other traditions that have emerged from the anti-Stalinist left, neoconservatism has appealed to many Jewish intellectuals and activists but it is not, for that reason, a Jewish movement. Like other schools on the left, neoconservatism recruited from diverse ‘farm teams’ including liberal Catholics… populists, socialists and New Deal liberals in the South and Southwest… With the exception of Middle East strategy… there is nothing particularly ‘Jewish’ about neoconservative views on foreign policy. While the example of Israel has inspired American neocons… the global strategy of today’s neocons is shaped chiefly by the heritage of cold war anti-Communism.”

Whether American democracy could have survived the stresses put upon it by the Great Depression, World War II, the Cold War and the ongoing frauds posed by neoconservatism now poses an answerable question. It couldn’t. Fletcher School international law professor Michael Glennon maintains that the creation of the national security state in 1947 as a second, double government effectively renders the question mute. He writes: “The public believes that the constitutionally-established institutions control national security policy, but that view is mistaken. Judicial review is negligible; congressional oversight is dysfunctional; and presidential control is nominal. Absent a more informed and engaged electorate, little possibility exists for restoring accountability in the formulation and execution of national security policy.”

The motion to kill détente and hobble Henry Kissinger’s balance of power or “realist” foreign policy quickly followed the 1973 war in the form of the anti-Soviet amendment to the Trade Act known as Jackson-Vanik. Sponsored by Senator Henry “Scoop” Jackson of Washington State and Representative Charles A. Vanik of Ohio, but engineered by Albert Wohlstetter acolyte Richard Perle, trade concessions and virtually anything regarding Moscow would be forever linked to the Zionist Project through Jewish emigration to Israel from the Soviet Union. 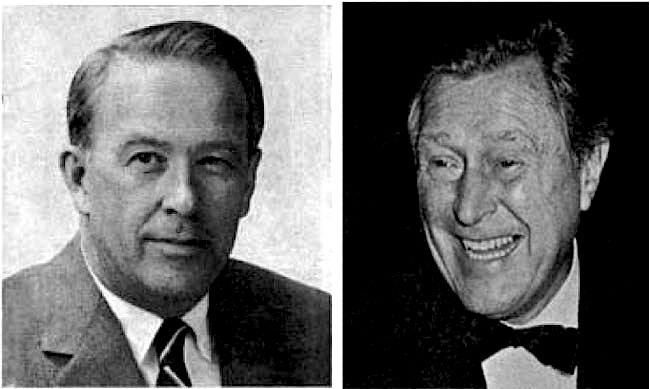 Supported by organized labor, traditional conservatives, liberals and neoconservatives, Jackson-Vanik hobbled efforts by the Nixon/Ford administration to slow the arms race and move towards a permanent easing of tensions with the Soviet Union. It removed control of American foreign policy from the President and Secretary of State, while delivering it permanently into the hands of the old anti-Stalinist/Trotskyist neoconservatives.

Jackson-Vanik overcame liberal support for détente because of an intellectual dishonesty within the non-communist left that had been roiling America’s intelligentsia since the 1930s. That dishonesty had transformed left wing Trotskyists into the CIA’s very own anti-Soviet cultural Cold Warriors and aligned them with the goals of the West’s right-wing. By the1950s their cause was not about left or right, or even liberal anti-Communism versus Stalinism. It was about exchanging a value system of laws and checks and balances for a system alien to America.

As Frances Stoner Saunder’s describes in her book The Cultural Cold War, it was simply about grabbing power and keeping it. “‘It’s so corrupt, it doesn’t even know it,’ said [legendary Random House editor] Jason Epstein, in an uncompromising mood. ‘When these people talk about a ‘counter-intelligentsia,’ what they do is to set up a false and corrupt value system to support whatever ideology they’re committed to at the time. The only thing they’re really committed to is power, and the introduction of Tzarist-Stalinist strategies in American politics. They’re so corrupt they probably don’t even know it. They’re little, lying apparatchiks. People who don’t believe in anything, who are only against something, shouldn’t go on crusades or start revolutions.”

But neoconservatives did go on crusades and start revolutions and continued to corrupt the American political process until it was unrecognizable. In 1973 neoconservatives did not want the United States having better relations with Moscow and created Jackson-Vanik to obstruct it. But their ultimate goal as explained by Janine Wedel in her 2009 study the Shadow Elite, was the complete transfer of power from an elected government representing the American people to what she referred to as a “new nomenklatura,” or “guardians of the national interest,” free from the restraints imposed by the laws of the nation.

Wedel writes, “Daniel Patrick Moynihan, the late senator from New York and onetime neoconservative, suggested that this kind of suspension of the rules and processes was what motivated him to part ways with the movement in the 1980s: ‘They wished for a military posture approaching mobilization; they would create or invent whatever crises were required to bring this about.’”

The synthesis of James Burnham’s Cold War ethos (established formally by Paul Nitze in his 1950 NSC-68) together with Trotskyism (espoused by the core neoconservatives), combined with this aggressive new support for Israel, empowered America’s neoconservatives with a cult-like political influence over American decision-making that would only grow stronger with time.

As envisaged by  Burnham, the Cold War was a struggle for the world and would be fought with the kind of political subversion he’d learned to master as a leading member of Trotsky’s Fourth International. But joined to Israel by Burnham’s fellow Trotskyists and the underlying influence of British Israelism – it would enter an apocalyptic mythos and resist any and all efforts to bring it to an end. 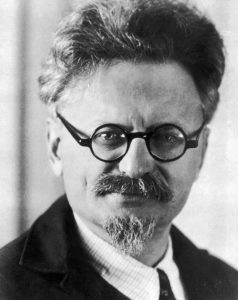 John B. Judis, former editor of the New Republic relates in a 1995 Foreign Affairs book review of the Rise of Neoconservatism by John Ehrman: “In the framework of international communism, the Trotskyists were rabid internationalists rather than realists or nationalists… The neoconservatives who went through Trotskyist and socialist movements came to see foreign policy as a crusade, the goal of which was first global socialism, then social democracy, and finally democratic capitalism. They never saw foreign policy in terms of national interest or balance of power. Neoconservatism was a kind of inverted Trotskyism, which sought to ‘export democracy’ in [Joshua] Muravchik’s words, in the same way that Trotsky originally envisaged exporting socialism.”

Through the eyes of the State Department’s Raymond Garthoff, the moves against détente in 1973 are viewed from the narrow perspective of a professional American diplomat. But according to Judis in his article titled “Trotskyism to Anachronism: The Neoconservative Revolution,” the legacy of NSC-68 and Trotskyism contributed to a form of apocalyptic thinking that would slowly exclude the professional policy-making process from the realm of empirical observation and replace it with a politicized mechanism for creating endless conflict. “The constant reiteration and exaggeration of the Soviet threat was meant to dramatize and win converts, but it also reflected the doomsday revolutionary mentality that characterized the old left,” Judis wrote.

In the end, he argues that the neoconservative success at using self-fulfilling prophecies to kill détente actually made the Cold War far more dangerous by encouraging the Soviet Union to undertake a military buildup and expand its influence, which the neoconservatives then used as proof that their theories were correct. In effect, “Neoconservatism was a self-fulfilling prophecy. It helped precipitate the crisis in U.S.-Soviet relations that it then claimed to uncover and respond to.”

Writing in the summer of 1995 with the Cold War finally ended and the storm passed, Judis considered neoconservatism as the subject of ridicule, describing key neoconservatives as merely political anachronisms and not the thriving political dynamo described by John Ehrman in his book. But in the end Ehrman turned out to be right, the neoconservative crusade had not come to a close with the end of the Cold War but had only entered a new and more dangerous phase.

Paul Fitzgerald and Elizabeth Gould are the authors of Invisible History: Afghanistan’s Untold Story, Crossing Zero The AfPak War at the Turning Point of American Empire and The Voice. Visit their websites at invisiblehistory and grailwerk.com