There have been no Israeli casualties.

According to PCHR, on Friday, April 20th, Israeli snipers “killed 4 Palestinian civilians, including a child, and wounded 274 others, including 41 children, 6 women and 1 journalist, in addition to hundreds suffering tear gas inhalation, including PCHR’s fieldworkers who were documenting the Israeli forces’ suppression of the entirely peaceful demonstrations near the border fence with Israel, east of the Gaza Strip.”

PCHR maintains that “for the fourth week in a row and upon a decision by the Israeli highest military and political echelons, the Israeli forces used lethal force against the peaceful protesters, who did not pose any threat to the soldiers’ life.” There is a cell phone camera recording now being widely distributed that appears to show Israeli snipers and soldiers cheering as they gun down unarmed Palestinians fleeing in the distance.

On April 17th, I spoke with Gaza-based Palestinian Journalist Wafa Al-Udaini who has been an eyewitness to all the Gaza protests in the ongoing anti-occupation, Right to Return protests since late March. Al-Udaini’s friend and colleague, Yaser Murtaja, a photojournalist and camera person for a Gaza-based media production company was shot on April 6th by Israeli sharp-shooters and died the next day of his wounds.

According to the Committee to Protect Journalists, “Pictures posted on social media by local journalists and witness testimony from local journalists show that Murtaja was wearing a bulletproof vest and helmet that were both clearly marked with the words “PRESS” when he was hit.”

In the following interview, Al-Udaini offers an eye-witness recounting of the initial protest in Gaza on March 30th, in which at least 18 protesters were killed by Israeli snipers and well over a thousand people were wounded.

Dennis Bernstein: We are going to hear now some eyewitness accounts, some very troubling testimony of the way in which Israeli snipers, from a long distance away, behind a fence and across a field, began to gun down hundreds of people, wounding over a thousand protesters and killing at least 18 Palestinians on the first day.  It was truly horrifying.

Some people were protesting, some were praying, and others, like Wafa Al-Udaini, were sitting down for a meal during the long day of anti-occupation protests, when Israeli snipers opened fire and began to gun down unarmed Palestinians.

Wafa Al-Udaini, tell us a bit of your background and then tell us what you witnessed on March 30th and the other protest days that you were an eye-witness to.

Wafa Al-Udaini: I live here in the Gaza Strip.  My grandparents were 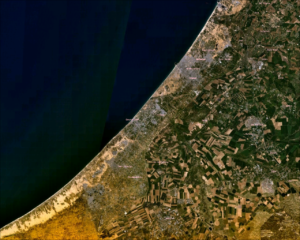 expelled from Beersheba by Israeli gangs in 1948.  Now I live as a Palestinian refugee in the Gaza Strip. I work as a journalist for different websites and on radio.  I am also an activist, the leader of a youth group here composed of students and journalists who work to present Palestinian issues to the world.

We were so excited about the Great March of Return protests, which began on the 13th of March.  It was a peaceful and secular march, where all Palestinians, male and female, elderly and children, came to the border fence to resist peacefully.  I took my family with me and we brought along something to eat and drink. We sat together and shared our food. We were asserting our right to demonstrate and reminding the world of our right to return to the land we occupied before we were driven from our homes.  I brought my camera and intended to livestream the event. We were about 700 meters from the Israeli side.

DB: Could you talk about when you realized that the soldiers were opening fire on civilians?  Were people around you being shot?

WAU: At the moment, I was interviewing people around me about what life was like before 1948, stories they had heard from their grandparents.  Then suddenly I heard shots and I saw people running. I asked what was happening and they told me that the Israelis were opening fire. A man fleeing with his children told me some had been murdered.  The Israelis began throwing teargas and they gunned down people who were fleeing.

DB: Let me explain to people that there is the border fence, which is electrified, and then there is a major piece of land between the fence and where the protest was happening.  My understanding is that the soldiers were sharpshooters and they were picking people off from the other side of the fence.

WAU: Exactly.  It had nothing to do with “defense,” because of the distance and because we were unarmed.  They fired on women holding the Palestinian flag. This was their crime. Claims of self defense are just ludicrous.

DB: A friend of yours, a journalist, Yaser Murtaja, was gunned down on April 6th. I understand he was wearing his press vest, that clearly marked him as a journalist. He was gunned down and killed by Israeli snipers.  Do you think he might have been shot because he was wearing his press vest, and the Israelis weren’t crazy about there killing fields being broadcast around the world?

WAU: Yes.  The Israelis are realizing that they can’t continue to fool people indefinitely.  This camera footage of all of this flies in the face of any claims that the Israeli army is acting in self defense.  These on-the-ground images show Israeli propaganda for what it is.

DB: It appears they are willing to wipe out peaceful protesters while the rest of the world is watching, while the US government continues to provide them with arms, and while the Western corporate press works to bury the real story.

← On Earth Day: Environmental Activism is Spreading
Tribute to Robert Parry in Berkeley on May 19 →

82 comments for “Israelis Continue to Open Fire on Gaza Protestors: An Eyewitness Account”