In this special report to Consortium News from the Syrian capital, Jeff Klein describes a people getting back on their feet after the defeat of jihadists in Ghouta, while explosives remain a part of daily life.

A loud and persistent booming woke everyone up here in the early hours of the morning on Saturday, April 14. To a visitor from Boston it sounded like Fourth of July fireworks over the Charles River. But this was Damascus and the thunder was from exploding missiles in the long-awaited attack by Donald Trump and his British and French allies.

The bombardments started precisely at 4am local time and continued for the better part of an hour. Only the timing was a surprise here, as Trump had been threatening a reprisal attack for the alleged use by the Syrian government of chemical weapons in Eastern Ghouta outside Damascus the previous week.

By all accounts, most Syrians were unfazed by the missile attack.  There were videos of Damascenes cheering from rooftops as air defense rockets were launched over the city to intercept the US, French and British missiles.

Trump’s tweet that the attack had been “perfectly carried out” is likely an overstatement. The Russian and Syrian militaries claim that the majority of the incoming missiles were shot down or diverted electronically from their targets, although this is impossible to verify.  But it is being reported that two unexploded missiles were handed over to the Russians for technical examination.

In any case, before and after photos of the alleged military/chemical research center in Damascus show pretty thoroughgoing destruction.  But the US attacks had been so fully telegraphed – there were claims that the Russians were informed in advance of the targets – that the buildings were empty and there were no reported fatalities.

Of course, if these Damascus targets had actually been chemical weapons facilities as charged there would have been massive civilian casualties from the fallout.  There were none.

Syrians I spoke to here all derided the chemical attack charge as fake news.  Nearly everyone else I met in the region, of varying political views, shared the same opinion.  In fact it is hard for anyone to fathom why the Syrian army would use chemical weapons when they were on the verge of military victory in Ghouta.  To the question of cui bono?(who benefits) it was hard to avoid the sense that only the so-called rebels and the enemies of Syria could gain any advantage from this alleged chemical attack—such as bringing in Western air strikes.

It was an ironic time for an American to be in Syria.  Arriving on Friday the 13th from Beirut with a group of international activists, including Americans, Canadians, Brits, Irish, Germans, one Swiss and one Dutch, we passed with some tension and delay at the Syrian-Lebanese border. But ultimately we received our visas after some intervention from the authorities in Damascus.

Our hotel, Beit al Wali, is a beautifully restored Ottoman period mansion in the Bab Touma quarter of the Old City. Syrians had invested heavily in the tourist sector before the war in the expectation of attracting badly needed hard currency, but of course these days there are hardly any foreign visitors apart from a small number of well-to-do Lebanese.

Bab Touma is a traditionally Christian part of town, but there are also many mosques here, in some cases directly neighboring churches of the 12 Christian denominations said to exist in Syria. Orthodox (Greek, Syrian and Catholic Melchite) are the majority, but there are also Roman Catholic, Maronite, Armenian and even evangelical churches. The restaurants in Bab Touma are frequented by mixed crowds of Muslims and Christians, drinking beer or Arak and smoking shisha (water pipes). Liquor stores and bars are commonplace here.

The morning following the missile attack, after a mostly sleepless night, we were led around the neighborhood by our Syrian translator and guide. Abdul-Razzaq, who had worked in the tourist industry for 25 years, was knowledgeable and professional. 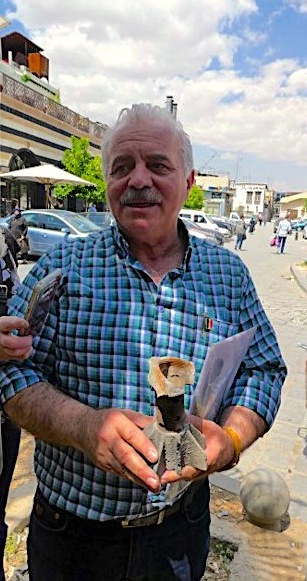 Like many Syrians, Abdul-Razzaq readily acknowledged the need for reforms in the country and is critical of high-level corruption. But he also believes that winning the war is the immediate priority.  He tells us “You don’t argue about what color to paint the walls while your house is burning down.” He adds: “This is not a war of Syrians, but an attack by the enemies of Syria.”  That was a very common sentiment in Syria, but falls into the category of Syrian voices which are rarely heard in the US.

Our guide seemed to know everyone in the old city. He questioned dozens of people we met on the streets and in the shops on their response to Trump’s missile attack. My Arabic is good enough to understand the questions and answers, so there was no question of mistranslation.  Nor was there any sign of coerced response.

Most locals in Bab Touma were buoyed by the recent government recapture of Eastern Ghouta, where the neighboring rebel-held town of Jobar had been the source of daily rockets and mortars launched against this part of the city.  We were shown many sites of these attacks on the walls and roads of the area, including the locations where people had been “martyred.” More than a hundred Damascus civilians had been killed by these attacks in recent months – of course little reported in the Western press – and the residents were clearly relieved that their town was now safe.

Compared to this, Trump’s missiles were a minor annoyance.  Nearly everyone ridiculed the attack as a “show” from that American “donkey.”  The atmosphere in the city was much more relaxed than it had been when I visited two years ago, reflecting a string of government military advances since then.

Of course, the missile attack was also derided by many war cheerleaders of both parties in Washington as “insufficient.” Israel and rebel supporters inside and outside the country expressed their disappointment. Sadly, the justification for the attack was also given credence by many self-described US progressives. Anyone who doubted the veracity of the supposed chemical attack in Duma, or whose first priority was to oppose illegal attacks on Syria has been smeared viciously.

Pearson Sharp, a reporter for the right-wing libertarian One America News Network and former Trump supporter was accused, in effect, of being a Russian agent by the progressive media for his on-the-scene reporting from Duma; at the same time he was being relentlessly attacked by viewers of his network for being disloyal to Trump.

The evening after the missile attack, hotel Beit al-Wali prepared a festive dinner for us – it was the birthday of Mario, one of the Germans among our group.  Present also was the British journalist Vanessa Beeley, who has exposed much of the phony Western propaganda coming out of Syria – and been vilified for it – together with some locals, including the very colorful Syrian comic who goes by the name of “Treka.”  Treka grew up in Nigeria among the Syrian expat business community there, sports long dreads and speaks in very colloquial but accented English. He defies all stereotypes about Arabs and Syrians. Treka has posted many videos critical of the MSM narrative abroad, and his latest, deriding the claim of the government chemical attack in Ghouta, is here.

On the Road Back to Damascus 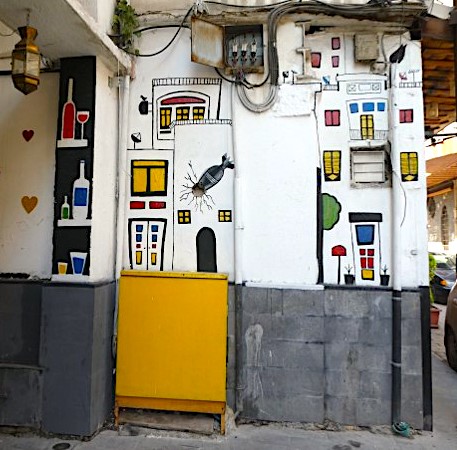 Returning to Damascus on Thursday April 19 after a visit to Aleppo, we were met this time by the roar of jets over the city and the continuous thunder of  bombs and artillery. The Syrian army  and their Russian ally were attacking the neighborhoods and Palestinian refugee camp of Yarmouk on the southern outskirts of the city.  It was strange to be driving along roads in Damascus less than a kilometer away from the bombing.  Few residents of the capital seemed to pay any attention at all, the nonchalant routine of 7 years of war.

Yarmouk had been long held by elements of terrorist groups Daesh (ISIS) and the al-Qaeda affiliated Nusra Front (now known under the name Jabhat Fateh al-Sham). Nearly all the original Palestinians had long gone, becoming refugees for the second time elsewhere in Syria or in Lebanon.  Some of them were fighting in Palestinian units alongside the Syrian army.

After the recapture of Eastern Ghouta, this was an effort by the government to clear out the last remaining opposition-held zone near the capital. Reports are that the rebels have agreed to evacuate, though as this is being written the air and artillery attacks are continuing.

If Yarmouk is retaken in its entirety it will represent another major military victory for the Syrian government and a key step toward defeating the remains of the armed insurgency.

In fact, the comprehensive military defeat of the rebels, now overwhelmingly dominated by sectarian religious extremists, remains the principle hope for peace and reconciliation within the country. This was the fervent wish of nearly all the Syrians we spoke with — in the government-held areas to be sure, but this now represents more than 80% of the population.

The task of reconstruction will be immense.  As we drove back to Damascus on Thursday we passed mile after mile of devastated landscape just outside the capital in what had shortly before been territory held by the armed insurgents in Eastern Ghouta. As in Aleppo, rebuilding has already begun, but it will take an enormous amount of resources to complete.

By rights, the nations who have intervened to destroy Syria – the US, Saudi Arabia, Qatar, Turkey and Israel – should bear the cost of reconstruction, but this this is unlikely to occur. These same countries have not stopped their attacks on Syria, nor are there any signs that the US is planning to give up its illegal occupation of the east of the country. Nevertheless, justice demands a reckoning.

The reckoning should also include Leftists or progressives inside and outside Syria who enthusiastically echo the MSM propaganda war and even clamor for more attacks in the name of a “revolution” that had ceased to be a plausible reality years ago.

Not so far back, those who opposed the Iraq War were smeared as supporters of Saddam Hussein, a charge that honest anti-war activists easily dismissed. Today, defending Syria from foreign aggression and advocating the right of Syrians to choose their own future apparently makes one an “Assad apologist” in some Progressive circles. These same commentators seem to ignore civilian casualties from the US-led aerial destruction of Mosul and Raqqa, while rarely even mentioning the ongoing US and Turkish illegal occupation of Syrian territory.

Syria has not been the proudest moment for the international Left.

44 comments for “Amid Missiles and Bombs in Damascus ”