ABC News correspondent Don North left the violence of Vietnam on April 3, 1968 to arrive the next day in Washington, gripped by the violent reaction to the assassination of Martin Luther King, Jr.

Since the Tet offensive of January 1968 the mean streets of Saigon reeked of smoke, tear gas and incoming rocket and mortar fire. I had been a correspondent for ABC TV News for the past two years and it was with great relief that I was re-assigned to Washington D.C. in early April. 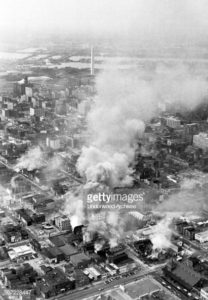 As news of the assassination of Dr. Martin Luther King, Jr. in Memphis spread, despondent crowds gathered in the heart of Washington’s business section along 14th street. Orderly at first, the crowds became surly and started breaking windows, looting stores and setting fires.

I reported immediately to the ABC News bureau on Connecticut Ave. The news editor said, “Good timing Don, we can use a reporter with combat experience. There’s a crew leaving for the riots in a few minutes. There’s room in the car for you.”

The Same Smell of Teargas

Cruising down 14th Street the air was the same as in Saigon: filled with smoke and the smell of tear gas. A light rain was falling. Slick streets were littered with broken glass and bricks. Stretches of 14th and 7th and H looked like combat zones. Hundreds of blazes set by arsonists would leave wreckage and desolation. We were seeing the beginning of the reaction to the assassination that would beset Washington for the next 72 hours and leave sections of the city in ruins for over 30 years.

Local businesses were being vandalized, windows smashed and merchandise carried off. We pulled up to a liquor store where looters were walking out through smashed windows carrying armloads of booze. We discreetly filmed with an Auricon sound camera through a side window. The looters didn’t seem to notice. 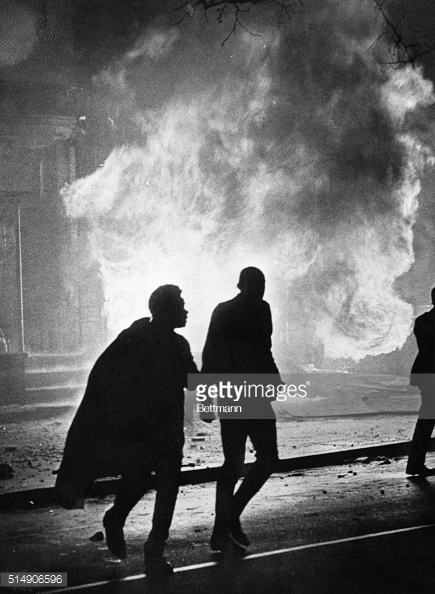 Suddenly an angry man rushed at our car with a large brick in his hands and started pounding on a side window. It didn’t break as we sped out of his reach.

The riots apparently began nearby with a brick thrown through the window of the Peoples Drug Store at 14th Street and U. Dr. King had died at 8 P.M. Though he had ardently preached non-violence, by 10 P.M. large crowds gathered to vent anger, sadness and frustration that was justified, even if the violence wasn’t. Teenagers walked with transistor radios tuned to the news. Many local stations played hymns between newscasts.

Ben’s Chili Bowl near the Peoples Drug Store was not targeted by looters and managed to stay open through the night. Stokely Carmichael, a member of the Black Panthers, made the Chili Bowl his headquarters and he led a group of youths into nearby stores demanding they close in respect for Dr. King’s death. Carmichael had been a follower of King but had recently become independent. I tried to interview him but he was moving too fast.

But in the weeks following the riots I would often sit down with Carmichael, as he became a nationally known voice against the war I had left behind in Saigon. That night, he urged the crowds to stay calm, but their anger was too great.

The looters soon turned to arson and threw Molotov cocktails into buildings and rocks and bricks at firefighters who tried to put out the blazes. Many African-American store owners sprayed “SOUL” on their windows to be spared.

The D.C. fire department reported 1,180 fires between March 30 and April 14. Property loss caused by the disturbances was extensive. 1,190 buildings, including 283 homes were badly damaged or destroyed an estimated loss at $25 million. Mostly white residents, fearful of the violence, accelerated their departure for suburban areas.

By Friday, April 5, the unrest spread to other sections of the District, especially 7th Street NW, H St and parts of Anacostia. Joining the 3,000 strong D.C. police force, Federal troops and the National Guard were called in and would reach 11,000 in numbers. U.S. Marines mounted machine guns on the steps of the Capitol and Army troops from the 3rd Infantry guarded the White House . Federal troops now occupied parts of Vietnam and America. 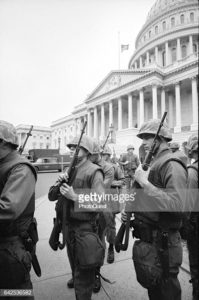 In three days of upheaval, 13 people were killed, two by police officers. Riots that week in Newark caused 27 deaths and 43 were killed in Detroit.

A 5:30 PM curfew was enforced in the District.  D.C. Commissioner Walter Washington, later to become Washington’s first black Mayor, made nightly appearances during the unrest, and helped to stem the violence. He had rebuffed FBI suggestions that police shoot rioters and looters on the spot.

The military occupation of Washington was the largest of any American city since the Civil War and raised questions about whether it was legal, as the use of federal troops for law enforcement had been banned by the Posse Comitatus Act of 1878.

Killed on the First Anniversary of His Vietnam Speech

Had the Johnson administration heeded King’s words about the state of America and its war in Southeast Asia, perhaps the violence I had left behind in Saigon and arrived to in downtown Washington may never have happened.

In his Riverside Church speech given on April 4, 1967, exactly one year before his assassination, King said:

Surely this is the first time in our nation’s history that a significant number of its religious leaders have chosen to move beyond the prophesying of smooth patriotism to the high grounds of a firm dissent based upon the mandates of conscience and the reading of history.

As I have called for radical departures from the destruction of Vietnam, many persons have questioned me about the wisdom of my path. At the heart of their concerns, this query has often loomed large and loud: “Why are you speaking about the war, Dr. King? Why are you joining the voices of dissent?” “Peace and civil rights don’t mix,” they say. “Aren’t you hurting the cause of your people?” they ask.

There is at the outset a very obvious and almost facile connection between the war in Vietnam and the struggle I and others have been waging in America. A few years ago there was a shining moment in that struggle. It seemed as if there was a real promise of hope for the poor, both black and white, through the poverty program. There were experiments, hopes, new beginnings. Then came the buildup in Vietnam, and I watched this program broken and eviscerated as if it were some idle political plaything on a society gone mad on war. And I knew that America would never invest the necessary funds or energies in rehabilitation of its poor so long as adventures like Vietnam continued to draw men and skills and money like some demonic, destructive suction tube.

So I was increasingly compelled to see the war as an enemy of the poor and to attack it as such. Perhaps a more tragic recognition of reality took place when it became clear to me that the war was doing far more than devastating the hopes of the poor at home. It was sending their sons and their brothers and their husbands to fight and to die in extraordinarily high proportions relative to the rest of the population. We were taking the black young men who had been crippled by our society and sending them eight thousand miles away to guarantee liberties in Southeast Asia which they had not found in southwest Georgia and East Harlem. So we have been repeatedly faced with the cruel irony of watching Negro and white boys on TV screens as they kill and die together for a nation that has been unable to seat them together in the same schools. So we watch them in brutal solidarity burning the huts of a poor village, but we realize that they would hardly live on the same block in Chicago. I could not be silent in the face of such cruel manipulation of the poor.

Don North, a veteran war correspondent who covered the Vietnam War and many other conflicts around the world, is the author of Inappropriate Conduct,  the story of a WW II correspondent whose career was crushed by the intrigue he uncovered. 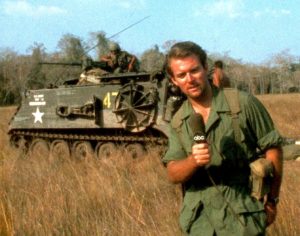 ← King’s Legacy Betrayed
What Did Israel Bomb in the Syrian Desert in 2007? →