A memorial was held on Saturday for Robert Parry, the late founder and editor of this web site.  Among the speakers paying tribute to Bob was Joe Lauria, the new editor of Consortium News. 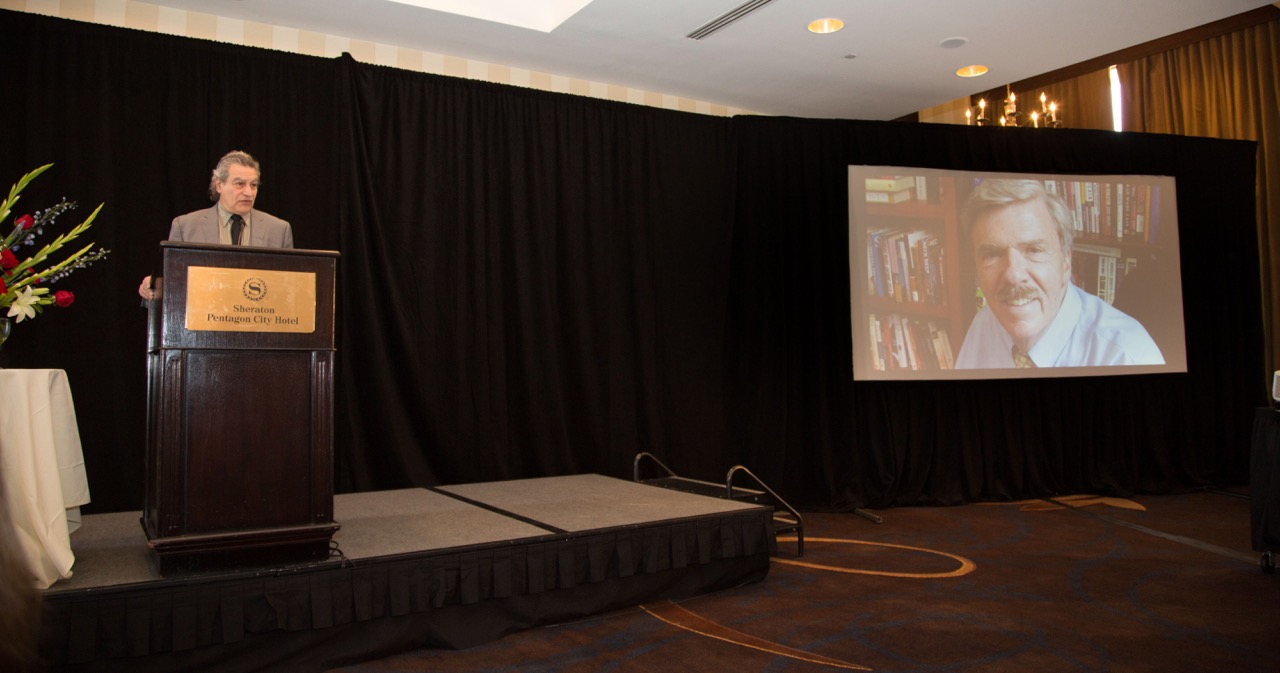 If you watch Bob’s various talks available on YouTube you’ll see that he was often asked why he started Consortium News. Bob says, essentially, that he got fed up with the resistance he faced from editors who put obstacles in the way of his stories, often of great national significance. One editor at Newsweek told him they were suppressing a story for “the good for the country.” The facts he’d unearthed went too far in exposing the dark side of American power. His editor was speaking, of course, about what was for the good of the rulers of the country, not the rest of us. As we just heard from John Pilger, Bob created a consortium for journalists who ran up against similar obstruction from their editors: a place for them to publish what they could not get published in the mainstream.

Sixteen years after Bob launched Consortium News with Sam and Nat I became one of those journalists. I’d had similar experiences. When I covered the diplomacy at the U.N. leading up to the 2003 invasion of Iraq for a Canadian chain that published the Montreal Gazette, Ottawa Citizen, and other papers, I gave equal weight in my stories to the German, French and Russian opposition on the Security Council to the invasion.  So the chain’s foreign editor called me up one day from Ottawa to berate me for not supporting the war effort in my reporting.

He told me his son was a marine. I told him I was certain he was proud of him, but my job was not to support the war but to report objectively on what was happening at the Security Council.  The Bush administration never got their resolution. But they invaded anyway. It was illegal under international law as Kofi Annan finally said after being pressured by a BBC interviewer. Annan was then hounded to the point of a near nervous breakdown by the likes of then UN Ambassador John Bolton, who, unfortunately. has since gotten a promotion. I, on the other hand, on the day of the invasion was fired.

Later, while covering the U.N. for The Wall Street Journal, I found that several of my stories were suppressed or inconvenient facts were getting edited out. One was a story I twice had rejected on a declassified Defense Intelligence Agency document that predicted the rise of ISIS back in 2012 but was ignored in Washington. It said the U.S. and its allies in Europe, Turkey and the Gulf were supporting a Salafist principality in eastern Syria that could turn into an Islamic State. Such a story would undermine the government’s war on terrorism.

In another instance, my editors repeatedly removed from my stories, on the UN vote on Palestine’s observer status, a line indicating that 130 nations had already recognized Palestine. At that point I realized the Journal had an agenda—not to neutrally report complex international events from multiple sides, but to promote US interests abroad. So I turned to Bob and he accepted a piece from me on that Palestine issue in late 2011, the first of many of my articles that he eventually published.

Bob was without doubt the best editor I’ve ever had. He was the only one who really understood—or accepted–what I was writing about.

Bob was a supreme skeptic, but he never descended to cynicism. His legacy, which I am committed to carry on, was of a principled, non-partisan approach to journalism. He took a neutral stance reporting on international issues, which some wrongly saw as anti-American. Bob knew never to take a government official’s word for it, especially an intelligence official. He knew people in all governments lie. But there are two other parties involved: the press and the public. He understood that the press had to act as a filter, to verify and challenge government assertions, before they are passed on to the public. Bob became distraught, and in his last piece poignantly said so, about the state of American journalism, where careerism and vanity had aligned the profession with those in power, a power through which too many reporters seem to live vicariously.

The press’ power is distinct from the government’s, it is the power to hold government accountable on behalf of the public. Bob understood that the mainstream media’s greatest sin was the sin of omission: leaving out of a story, or marginalizing, points of view at odds with a U.S. agenda, but vital for the reader to comprehend a frighteningly complex world.

The viewpoints of Iranians, Palestinians, Russians, North Koreans, Syrians and others are never fully reported in the Western media, though the supposed mission of journalism is to tell all sides of a story. It’s impossible to understand an international crisis without those voices being heard. Routinely or systematically shutting them out also dehumanizes people in those countries, making it easier to gain popular support in the U.S. to go to war against them.

The omission of such news day after day in newspapers and on television adds up over the decades to what Bob called the Lost History of post-war America. It is a dark side of American history—coups overthrowing democratically-elected leaders, electoral interference, assassinations and invasions. Omitting that history, as it continues to unfold nearly everyday, gives the American people a distorted view of their country, an almost cartoonish sense of America’s supposed morality in international affairs, rather than it just pursuing its interests, too often violently, as all great powers do.

These things aren’t normally mentioned in polite society. But Bob Parry built his extraordinary career telling those truths. And I’m going to do my damnedest to continue, and honor, his legacy.

← ‘A Very Different Journalist’: John Pilger’s Tribute to Bob Parry
Missile Attack on Syria: a Salute to the ‘Russia-gate’ Faithful →

67 comments for “Bob Parry: Holding Government and Media to Account”