Proponents of the Russia-gate conspiracy got what they wished for when Donald Trump risked war with Russia with his Syria strike, comments Norman Solomon.

Politicians, pundits and activists who’ve routinely denounced President Donald Trump as a tool of Vladimir Putin can now mull over a major indicator of their cumulative impact: The U.S.-led missile attack on Syria before dawn Saturday is the latest benchmark for gauging the effects of continually baiting Trump as a puppet of Russia’s president.

Heavyweights of U.S. media — whether outlets such as CNN and MSNBC or key newspapers like The New York Times and The Washington Post — spent most of last week clamoring for Trump to order air strikes on Syria. Powerful news organizations have led the way in goading Trump to prove that he’s not a Putin lackey after all.

One of the clearest ways that Trump can offer such proof is to recklessly show he’s willing to risk a catastrophic military confrontation with Russia.

In recent months, the profusion of “war hawks, spies and liars” on national television has been part of a media atmosphere that barely acknowledges what’s at stake with games of chicken between the world’s two nuclear superpowers. Meanwhile, the dominant U.S. news media imbue their reporting with a nationalistic sense of impunity. 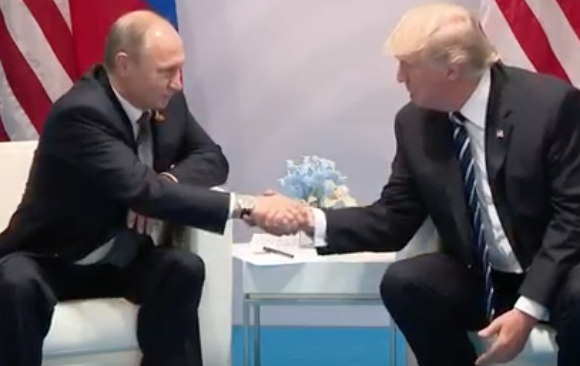 Putin and Trump in Hamburg, July 7, 2017. (Screen shot from Whitehouse.gov)

On Saturday morning, the top headline on the Times website was “U.S. Attacks Syria in Retaliatory Strike,” while the subhead declared that “Western resolve” was at work. The story led off by reporting that Trump “sought to punish President Bashar al-Assad for a suspected chemical attack near Damascus on [April 7] that killed more than 40 people.”

Try putting the shoe on the other foot for a moment. Imagine that Russia, with a similar rationale, fired missiles at U.S. ally Saudi Arabia because the Kremlin “sought to punish King Salman for his country’s war crimes in Yemen” — with such reportage appearing under a headline that described the Russian attack as a “retaliatory strike.”

The latest U.S. air attack on Russia’s close ally Syria was as much politically aimed at Moscow as at Damascus. And afterwards, the televised adrenalin-pumped glee was as much an expression of pleasure about striking a blow at Putin as at Assad. After all, ever since Trump took office, the U.S. media and political elites have been exerting enormous pressures on him to polarize with Russia.

But let’s be clear: The pressures have not only been generated by corporate media and the political establishment. Across the United States, a wide range of people including self-described liberals and progressives — as individuals and organizations — have enthusiastically participated in the baiting, cajoling and denouncing of Trump as a Putin tool. That participation has stoked bellicose rhetoric by congressional Democrats, fueling the overall pressure on Trump to escalate tensions with Russia.

What’s really at issue here is not the merits of the Russian government in 2018, any more than the issue was the merits of the Soviet government in 1967 — when President Lyndon Johnson hosted an extensive summit meeting in Glassboro, New Jersey, with Soviet Premier Alexi Kosygin, reducing the chances of nuclear war in the process. 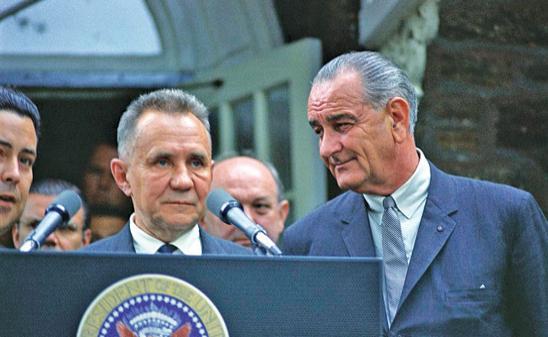 If you keep heading toward a destination, you’re likely to get there. In 2018, by any realistic measure, the escalating conflicts between the United States and Russia — now ominously reaching new heights in Syria — are moving us closer to World War III. It’s time to fully recognize the real dangers and turn around.

This commentary originally appeared on Truthdig.com.

← Bob Parry: Holding Government and Media to Account
It Started Over Lunch and Led to the Exposure of One of the Greatest Scandals in U.S. History →

72 comments for “Missile Attack on Syria: a Salute to the ‘Russia-gate’ Faithful”