An attack on protesting Palestinians on March 30 by the Israeli military left 18 dead and thousands injured and constitutes mass murder and a blatant war crime, argues Palestinian human rights attorney Diana Buttu in an interview with Dennis J. Bernstein.

The latest Israeli slaughter of Gazans falls into the category of shooting fish in a tank. Indeed, as tens of thousands of Gazans protested the longest occupation in modern history and demanded their historical Right to Return, last Friday, March 30, Israeli snipers raised their rifles repeatedly and, from behind a wide-buffer and an electrified fence, opened fire on the Palestinians. 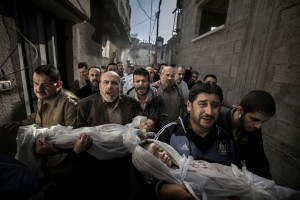 The latest stats of killed and wounded from the so-called confrontation between Israeli sharp-shooters and Palestinians is at least 18 Palestinians killed and over 1,000 wounded. On the Israeli side, zero casualties. Zero!

Diana Buttu is a Palestinian/Canadian lawyer based in the Occupied West Bank of Palestine. She is a former Palestinian negotiator.  I spoke with her in Haifa on April 2nd, 2018.

Dennis Bernstein: Maybe you could begin with your best information in terms of what happened.

Diana Buttu: I can give you the rough numbers.  18 Palestinians are confirmed dead.  Others are in very critical condition and unable to get the medical attention they need.  Over [1,000] Palestinians were wounded.  They are unable to receive treatment both because of the ongoing blockade of the Gaza Strip and because of the lack of electricity.  Palestinian human rights organizations are calling for the wounded to receive treatment elsewhere, but so far the Israeli government has refused.

Dennis Bernstein: What do we know about how this unfolded?  I heard in an NPR report that this was not just a protest, that these were militants.

Diana Buttu: We know that the Israeli government announced days in advance that they were going to be positioning snipers along the border.  Now, there are multiple sets of borders in effect here. There is an electrified fence on the eastern and northern sides of the Gaza Strip.  A cement wall is on the southern border with Egypt. The water is blockaded by the Israeli navy on the western side.

In addition to those physical borders, the Israeli army has been enforcing what they call a buffer zone, which is about 1,000 feet away from the electrified fence.  We know that when Palestinians approached the buffer zone on the eastern side, the Israelis immediately started shooting Palestinian protesters.

From video footage we can see that people were shot in the back.  Others were shot for carrying tires or for simply walking into these areas.  These were individuals who posed no threat whatsoever. Even if they were attempting to cross the border, you don’t use live fire to kill people who are crossing a border.

And secondly, the point of this was to highlight the fact that Palestinians cannot return.  80% of the Palestinian population of the Gaza Strip does not come from the Gaza Strip. They are actually refugees driven out by the Israelis.  While Israel keeps claiming that there were attempts to “infiltrate,” in any case this is not a proper response.

The fact that Israel was positioning snipers on the border indicates that they were ready, willing and able to shoot protesters in the back.  The head of the Israeli defense establishment has said that every one of these snipers should be commended.

Dennis Bernstein: How many Israeli soldiers were wounded and killed?

Diana Buttu: Zero.  Again, this was not a question of the protesters posing any danger to any individual.  It was the mere fact that Palestinians were out in protest.

I want to put this in its proper historical perspective.  The reason they were out on March 30 is because this day, in 1976, the Israelis did the exact same thing to Palestinians who were citizens of Israel.  At that time, Palestinians were protesting the confiscation of thousands of acres of Palestinian land by the Israeli government in order to make way for Jewish towns. 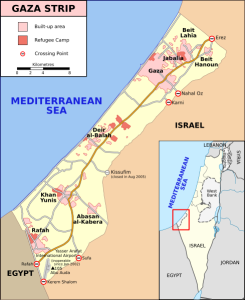 The Gaza Strip is a tightly cordoned-off area of only 140 square miles where some 1.8 million Palestinians are essentially trapped. (Photo from Wikipedia)

On that day in 1976 Israel shot and killed six unarmed Palestinian protesters.  Here we are forty years later, with people commemorating the killings, Israel does the exact same thing, this time killing three times that number.

Dennis Bernstein: The Israelis have declared that there will be no investigation.

Diana Buttu: Yes, and this is nothing new.  There has never been an investigation into the actions of the army.  After the massacre at Jenin in March of 2002, when 52 Palestinians were killed by the Israeli army, the government would not allow an investigation and announced that everything had been justified.

I do not expect any justice coming from the Israeli military establishment.  Trump has made it very clear in the Security Council that there will never be any investigation of these 18 Palestinian deaths.

Dennis Bernstein: And this happens at a time when people in the Gaza Strip are suffering on many levels.  This protest took a lot of courage, given the fact that everyday life is a struggle. People often refer to the Gaza Strip as one of the largest open-air prisons in the world.

Diana Buttu: It has gone beyond that.  The analogy was perhaps true in 2005 but now it has gotten worse than that.  In prison at least you have electricity, you are still fed three times a day.  Israel is making sure that the Palestinians only get electricity two or three hours a day.  There is a waiting list of some 30,000 people who want to be able to leave, who have valid visas but are not allowed to leave.  Imports are curtailed by the Israelis.

I myself have not been able to enter the Gaza Strip since 2007, which means that I have left behind all of my friends.  And I am one of the lucky ones. My friends have been unable to leave or even think of leaving. Life for people in Gaza is completely miserable, with unfit drinking water, with an electricity infrastructure that is barely functioning, with a healthcare system that is on the verge of collapse, with malnutrition rates soaring, with unemployment rates through the roof.  It is little wonder that the UN has said that Gaza will be unlivable by 2020.

Dennis Bernstein: How far away are you from these friends who you are not able to visit?

Diana Buttu: About fifty miles.  The only chance I have of seeing my friends is if they, by some miracle, are able to get a visa and exit and we meet in a third country.  The last time this happened was several years ago when we happened to meet in the United States.

Dennis Bernstein: So the idea of a two-state solution in this context is really a crazy thought.  A paper like The New York Times loves maps, but I have never seen a map of independent Palestine.  This is the nature of occupation, in the context, wouldn’t you say, of ethnic cleansing?

Diana Buttu: Absolutely.  The ethnic cleansing of Palestine has been the one common thread since 1948.  Politicians and diplomats have tried to mask it by calling for things like a two-state solution.

Part of the ethnic cleansing process is to get rid of Palestinians so that they don’t have to see them.  The tragedy is that no one is labeling it that. Instead they try to hide behind some diplomatic initiative or other. 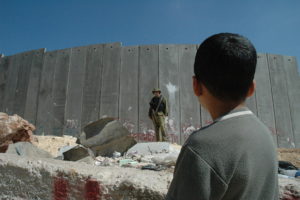 A Palestinian boy and Israeli soldier in front of the Israeli West Bank Barrier. August 17, 2004. (Photo by Justin McIntosh; Wikipedia)

Once we start looking at it as an ethnic cleansing process, we can move away from all these false attempts to come up with resolutions and put in place mechanisms to stop the process.

Dennis Bernstein: Where did the ammunition come from that was used to kill these 18 protesters and wounded some [1,000] more?

Diana Buttu: It’s a mix.  Mostly it is US weaponry.  The question is, why is the United States allowing its weaponry to be used on peaceful protesters?  Don’t we have legislation in place to prevent such human rights abuses from happening? But Israel gets to take a pass when it comes to the use of US weaponry.

My big fear is that these attacks on Gaza are like a live arms show.  We saw after the 2014 massacre in Gaza that arms sales actually went up in Israel.  This is why it is important to push for a complete arms embargo.

Dennis Bernstein: My understanding is that many Palestinians have vowed to continue to protest and resist.  Do you think there will be more live fire attacks?

There are plans to protest from Land Day, March 30, through May 15, the day that the ethnic cleansing of Palestine is commemorated.  It is also the day that the US moves its embassy in violation of international law.

So we will see six weeks of protest taking place.  And I certainly expect that the Israeli military machine is going to continue to take Palestinian lives, because no one is stopping them.

Dennis Bernstein: Have any reporters been calling you from MSNBC or NPR to get your perspective?

Diana Buttu: For the most part, I think that the killing of Palestinians has become so commonplace that it is no longer news.  It seems that Trump’s tweets are of more importance than 18 lives taken away so quickly, 18 families affected, and their friends and others.

The day before the march, a young artist wrote in the sand on the beaches in Gaza “# I will return” in Arabic.  The next day he was one of those who lost their lives. The next day his friend wrote his name in the sand as a means of commemorating him.  These are people with real lives, with dreams, with fears, with families. Instead we are reduced to numbers, not nearly as important as the 140 characters that your president tweets out.

110 comments for “On the Gaza Protesters Murdered by Israeli Forces”