Exclusive: President Trump fancies himself a crafty, zigzagging negotiator, but his pride in his bellicose unpredictability has brought the North Korean crisis to the edge of a horrific calamity, as Jonathan Marshall explains.

Anyone who says talk is cheap hasn’t tried getting President Trump to talk with his North Korean counterpart, Kim Jong Un. Not even the specter of a war that could kill millions of people on the Korean peninsula, Japan and now even the continental United States seems sufficient to push the two leaders into negotiations. Both sides insist on unacceptable preconditions before they will even consider holding formal talks to reach a peaceful settlement.

Successful negotiations might end Washington’s economic sanctions and military preparations against North Korea, but Pyongyang demands that outcome before it even starts talks. Two weeks ago, North Korea’s ambassador to the United Nations, Han Tae Song, said, “As long as there is continuous hostile policy against my country by the U.S. and as long as there are continued war games at our doorstep, then there will not be negotiations.”

On the other hand, the fact that South Korea sent seven warships in mid-November to join three U.S. aircraft carriers for war games off the coast of the Korean Peninsula almost seemed calculated to keep Pyongyang away from the bargaining table. U.S. and South Korean plans to start a massive five-day air force exercise on Dec. 4 will doubtless do the same. And the Trump administration’s recent designation of North Korea as a state sponsor of terrorism only reinforced Pyongyang’s suspicion that “the United States is not serious about negotiations,” in the words of one former Korea expert at the State Department.

As for U.S. demands, Defense Secretary James Mattis said recently of North Korea, “So long as they stop testing, stop developing, they don’t export their weapons, there would be opportunity for talks.” In other words, if they capitulate first, we will be happy to negotiate the terms of their surrender. Needless to say, North Korea’s latest test launch of its Hwasong-15 intercontinental ballistic missile gave the middle finger to Mattis’s demands.

Last year, the man who prides himself as the world’s greatest deal maker raised hopes of peace by saying he would “absolutely” speak to Kim, even if there were only a “10 percent or a 20 percent chance that I can talk him out of those damn nukes.” Trump told a campaign rally in Atlanta, “What the hell is wrong with speaking? . . . We should be eating a hamburger on a conference table.” 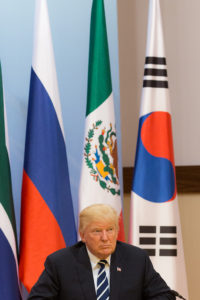 President Trump in front of the Russian, Mexican and South Korean flags at the G-20 summit on July 7, 2017. (Official White House Photo by Shealah Craighead)

A year later the President was no longer in the mood for a hamburger, well done or otherwise. “Presidents and their administrations have been talking to North Korea for 25 years, agreements made and massive amounts of money paid,” Trump tweeted. “Hasn’t worked, agreements violated before the ink was dry, making fools of U.S. negotiators. Sorry, but only one thing will work!”

No one in their right mind believes what his tweet implied — that war could solve the security issues raised by North Korea’s nuclear program.

Even before that country demonstrated the potential ability to hit the continental United States with a nuclear-tipped ballistic missile, it had the capacity to wipe out major U.S. coastal cities like New York, Houston, or Los Angeles with ship-borne nuclear bombs. North Korea’s massed artillery, chemical weapons, and nuclear bombs could also wreak havoc on South Korea and Japan, including U.S. civilians and military forces stationed there.

The result would be “tragic on an unbelievable scale,” in the words of Defense Secretary Mattis.

Under these circumstances, setting unacceptable preconditions for talks between the United States and North Korea is as self-defeating as the refusal of North Vietnam and the United States to hold peace talks until 1968 — after which they spent eight months arguing over the shape of the conference table. According to one researcher, nearly 1,600 U.S. soldiers lost their lives over those eight months of pointless maneuvering. Orders of magnitude more Americans could die if talks don’t begin soon to reduce the growing danger of preemptive or accidental war with North Korea.

Contrary to Trump’s tweet — if anyone in Washington will take the time to study some history — past negotiations with North Korea did succeed dramatically in slowing down its nuclear program.

Thanks to citizen diplomacy by former President Jimmy Carter, and President Bill Clinton’s realization that preemptive war was not an option, Washington and Pyongyang negotiated a “landmark deal” in 1994. North Korea agreed to shut down its plutonium production in return for promises of help with its civilian nuclear energy infrastructure.

Over the next several years, the United States was able to inspect some of North Korea’s nuclear facilities — an unheard-of concession — and also negotiate a freeze on its missile-testing program.

Although North Korea shared in the blame, the deal eventually unraveled in no small part because a Republican-dominated Congress refused to allow the Clinton administration to keep its commitments. The incoming George W. Bush administration then canceled all further talks and condemned North Korea as part of the “axis of evil.” Said Vice President Dick Cheney, “We don’t negotiate with evil. We defeat it.”

The Obama administration, for its part, foolishly abandoned any hope of negotiations in favor of a policy of “strategic patience” — assuming that steady application of economic sanctions would bring Pyongyang to heel. If North Korea has proved anything, it’s that it will accept any level of suffering to achieve security.

All those failed opportunities leave the United States and South Korea only one real option with North Korea: to live with mutual nuclear deterrence, as we do with China and Russia, two far stronger nuclear powers that were once deeply hostile to the United States. It’s time — really, long past time — for both sides to drop their preconditions and start talking about how our countries can learn to live rather than die with each other.

Jonathan Marshall is author or co-author of five books on international relations and history. His recent contributions to Consortiumnews.com on Korea include “Trump’s North Korea Delusions,” “Hurtling Toward Fire and Fury,” “Risk to US from War on North Korea,” “North Korea Fears ‘Regime Change’ Strike,” “The Negotiation Option With North Korea,” and “Behind the North Korean Nuke Crisis.”

← Behind the Push for Catalonian Independence
America’s Military-Industrial Addiction →

70 comments for “What’s Wrong with Talking to North Korea?”