Exclusive: A combination of ignorance and rashness is making President Trump a particularly dangerous leader as he crashes ahead with a possible preemptive war on North Korea, writes Jonathan Marshall.

President Trump reportedly tells an average of nearly five lies a day. He is also renowned for what Republican pundit Michael Gerson calls “his nearly complete ignorance of policy and history.” 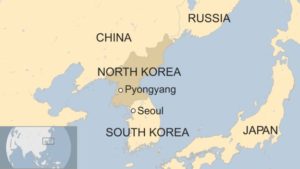 So it would be tempting — but wrong — to shrug off yet another crackpot claim that Trump made on Fox News a few days ago. Wrong because, if Trump really believes what he said, it may signal his serious willingness to start a bloodbath with North Korea that could consume millions of lives. It gives new credence to Sen. Bob Corker’s recent warning that Trump could set the United States “on the path to World War III.”

In an interview with Sean Hannity on Oct. 11, Trump boasted that America’s ballistic missile interceptors offer, for now at least, a reliable defense against a small-scale nuclear missile launch by North Korea.

“We have missiles that can knock out a missile in the air 97 percent of the time, and if you send two of them, it’s going to get knocked down,” Trump asserted.

In awarding Trump’s claim a maximum false rating of “Four Pinocchios,” Washington Post fact checker Glenn Kessler called the President “totally off base,” but conceded that Trump hadn’t made up the claim out of whole cloth.

A few years ago, the Pentagon’s program manager for the $40 billion boondoggle known as the Ground-Based Midcourse Defense (GMD) system assured Congress that “the probability will be well in the high-90s today of the GMD system being able to intercept [a missile] today.” In the same spirit, the head of the Pentagon’s Missile Defense Agency boasted this May that his anti-missile missiles could “defeat any threat” that North Korea “would throw at us . . . through 2020.”

The GMD currently consists of 36 interceptor missiles based at Fort Greely, Alaska, and Vandenberg Air Force Base in California. With more on the drawing board, they represent a huge cash cow to military contractors like Boeing and Raytheon, but they’ve never been shown to work reliably.

Former Massachusetts Rep. John Tierney, who led a subcommittee that oversaw the GMD program, recently complained that “During hearings, Pentagon officials repeatedly overstated confidence in the program, understated technical limitations and dismissed concerns from physicists and other experts. This false sense of security persists today.”

According to Kingston Reif, an expert at the Arms Control Association, “The flight test record of the system is 10 for 18 and these tests have occurred under scripted and controlled conditions — meaning the realism of the tests is limited.”

“The system has only been tested once against an ICBM class target,” Reif added. “Twenty of the 32 interceptors deployed in Alaska are armed with an older kill vehicle that has not had a successful test since 2008. The system has never been tested against ‘complex countermeasures’ that North Korea could develop to try to fool U.S. defenses.”

Another arms expert, Joseph Cirincione, quipped, “We have as much chance of intercepting a North Korean missile as the president does of scoring a hole in one.”

The Pentagon’s own chief weapons evaluator warned recently that the GMD has at best “a limited capability to defend the U.S. Homeland” and the Government Accountability Office last year reported that the Missile Defense Agency’s optimistic performance claims “have not been demonstrated.”

In a follow-up report this year, the GAO flatly declared that the Pentagon’s system “will not likely provide robust defense as planned.”

What are the consequences of President Trump believing unfounded Pentagon claims about U.S. missile defense capabilities? He might well be tempted to launch a preemptive attack on North Korea — the much discussed “military option” — confident that the U.S. homeland will be protected against a retaliatory strike.

He might further feel tempted to launch such an attack sooner rather than later, before North Korea can build up its fleet of nuclear missiles to overwhelm the GMD’s alleged capabilities.

As I have previously discussed, influential Trump advisers like Sen. Lindsey Graham have been urging the President for months to unleash an all-out attack before North Korea can develop its nuclear missile capabilities.

Many of Trump’s other close advisers appear to agree with Graham’s premise, rather than acknowledging that America’s vast nuclear arsenal is more than sufficient to deter a North Korean attack.

National Security Adviser H. R. McMaster declared this summer that “we can no longer afford to procrastinate” while North Korea develops its nuclear forces, arguing that “classic deterrence theory” won’t work with such a brutal government.

White House Chief of Staff John Kelly said Thursday, “I think I speak for the administration, that [North Korea] can simply not have the ability to reach the [U.S.] homeland.”

Trump himself declared in his speech to the United Nations in September, “It is time for North Korea to realize that the denuclearization is its only acceptable future.” He later tweeted that Secretary of State Rex Tillerson was “wasting his time trying to negotiate with Little Rocket Man.”

As conservative foreign policy analyst Daniel Larson observed, “The danger here is that Trump has defined everything except North Korean denuclearization as unacceptable, and that implies that the U.S. won’t tolerate North Korea’s continued possession of nuclear weapons. That suggests that Trump could be contemplating launching an illegal preventive war, and such a war would likely escalate to a nuclear exchange that would claim the lives of millions at a minimum. That is the trap that Trump’s irresponsible rhetoric is creating for the U.S.”

Trump’s misplaced faith in his missile defense system only heightens that risk. As arms expert Tom Collina observed in September, “If President Trump believes he can stop a missile attack, he is more likely to escalate a conflict. This is how nations stumble into unintended wars. We can just imagine the conversation where Defense Secretary Jim Mattis tries to explain to President Trump why he can’t depend on his $40 billion anti-missile system: ‘If I have it, why can’t I use it?’”

Mattis has a duty to explain to Trump that Pentagon claims for that system are hype aimed at winning more appropriations from Congress, not facts. He has a further duty to remind the President that the consequences of war with North Korea would be, as he once put it, “tragic on an unbelievable scale.”

The Chance for Deterrence

Mattis should also point out that a preemptive war would be as unnecessary as it would be destructive. In senior leadership meetings, North Korea’s Kim Jong Un recently described his small but growing nuclear arsenal not as an offensive force but as a “powerful deterrent firmly safeguarding the peace and security in the Korean peninsula and Northeast Asia” against the “protracted nuclear threats” from Washington.

In another setting, Kim added, “Our final goal is to establish the equilibrium of real force with the US and make the US rulers dare not talk about military option.”

U.S. intelligence experts believe Kim means what he says about acquiring nuclear weapons for deterrence, not for war. “Waking up one morning and deciding he wants to nuke” Los Angeles is not something Kim Jong Un plans to do, the CIA’s top Korea analyst recently said in public comments. “He wants to rule for a long time and die peacefully in his own bed.”

So even if Trump buys the Pentagon’s sale pitch about missile defense capabilities, he has no reason to launch a catastrophic war to block North Korea’s nuclear missile program. But for all our sake, someone urgently needs to let Trump know that he can’t count on the U.S. homeland remaining unscathed if he does choose to start a war with a nuclear-armed adversary.

Jonathan Marshall is author or co-author of five books on international relations and history. His recent contributions to Consortiumnews.com on Korea include “Hurtling Toward Fire and Fury,” “Risk to US from War on North Korea,” “North Korea Fears ‘Regime Change’ Strike,” “The Negotiation Option With North Korea,” and “Behind the North Korean Nuke Crisis.”