Exclusive: North Korea has learned the lesson that surrendering WMD invites a U.S. invasion and murder of the leader – see Iraq and Libya – but talks to limit risks of another war remain an option, says Jonathan Marshall.

The unexpected missile launch this weekend by North Korea hit a bulls-eye. Its perfect aim, however, owed more to Pyongyang’s mastery of international theatrics than to rocket technology.

Traveling just 310 miles, the intermediate-range Pukguksong-2 missile struck nothing but water in the Sea of Japan. But it fully succeeded, as planned, in grabbing the attention of two of North Korea’s biggest enemies: Presidents Donald Trump of the United States and Shinzo Abe of Japan.

Instead of relaxing over dinner at Trump’s $200,000-per-membership Mar-a-Lago club, the two heads of state had to surround themselves with advisers and translators Saturday evening, scrambling to draft a joint statement by the light of their cell phones.

They came up with the usual bluster: Abe denounced the launch as “absolutely intolerable,” and Trump vowed to stand behind Japan, America’s “great ally, 100 percent.” (Not even the missile crisis could stop Trump from crashing a wedding reception at the club’s grand ballroom, however.)

North Korean Premier Kim Jon Un certainly didn’t win any friends with the launch. China criticized it as a provocation, and Russia declared that the test was in “defiant disregard” of United Nations resolutions. But it gave Kim something to brag about at home and, more important, kept his demands front and center on the world’s stage.

A Reuters news report summed up the conventional wisdom among U.S. analysts: “Few good options in Trump arsenal to counter defiant North Korea.” In a nutshell, President Obama’s eight-year policy of “strategic patience” — ratcheting up economic sanctions and diplomatic pressure — was a spectacular failure. Leaning on China to make it dictate terms to Pyongyang hasn’t worked either—in part because Beijing doesn’t want to risk triggering a collapse of North Korea’s regime. Tough U.N. resolutions condemning North Korea are worth less than a bowl of steaming kimche.

Then there is the military option. Its many advocates in Washington — including former Secretary of State John Kerry — argue the United States may need to wipe out North Korea’s nuclear and missile launch facilities, or even decapitate its regime, to prevent it from acquiring long-range missiles capable of reaching U.S. soil.

But North Korea’s nuclear facilities are designed to withstand anything short of a nuclear attack, and its conventional forces could quickly leave Seoul a smoldering ruin. How China would react to a preemptive U.S. attack is anyone’s guess. No less an authority than former Secretary of Defense William Perry says that a war with North Korea would be “catastrophic, possibly destroying the societies of both Koreas as well as causing large casualties in the U.S. military.”

A Voice of Reason

Perry is one of the few voices of reason who contests the militant groupthink prevalent in Washington. He counsels instead an attempt to engage Pyongyang in diplomacy. That strategy should appeal to the dealmaker who now inhabits the White House. 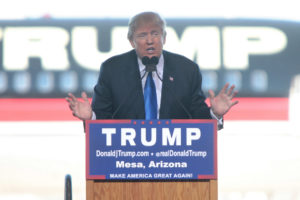 As Trump said during his campaign, responding to Hillary Clinton’s disparagement of trying to engage with Kim, “What the hell is wrong with speaking? . . . It’s called opening a dialogue.”

Perry participated in the Clinton administration’s successful negotiation of a 1994 deal with North Korea that suspended its plutonium enrichment program. George W. Bush, in his wisdom, scrapped the agreement and made North Korea a charter member of his “axis of evil.”

Watching Presidents Bush and Obama in action, Pyongyang understandably redoubled its nuclear program. “North Korea has decided, based on lessons from Iran, Iraq, and Libya, that its only sure means of survival is to be ‘too nuclear’ to fail,” remarked Scott Snyder, a Korea expert at the Council on Foreign Relations, during a recent Senate Foreign Relations Committee hearing. Or as committee chairman Sen. Bob Corker, R-Tennessee, put it, “What they learned is, you get rid of your WMDs, we take you out.”

That exchange was a rare recognition by Washington insiders that Kim, however, brutish and blustering, is pushing his country’s weapons program for the same reason that other nuclear powers acquired the Bomb: not to commit suicide, but to deter enemies. His regime states unequivocally that “we will not use our weapons on anyone unless they have attacked us.”

As Perry commented in January, “During my discussions and negotiations with members of the North Korean government, I have found that they are not irrational, nor do they have the objective of achieving martyrdom. Their goals, in order of priority, are: preserving the Kim dynasty, gaining international respect and improving their economy.”

Those words offer only a small measure of comfort, however. A nuclear-armed North Korea, with its inherently unstable political system, remains a huge risk to peace — all the more so if it prompts revived militarism in South Korea and Japan and unleashes a regional arms race.

The logical response is to try diplomacy, not more military threats, to reduce North Korea’s sense of isolation and paranoia. As China’s foreign ministry has repeatedly pointed out, “the root cause (of) the North Korea nuclear missile issue is the conflicts between North Korea and the United States, as well as between North and South Korea.”

The place to start resolving those conflicts, according to many Korea experts, is with negotiations to end the state of war between North Korea and its adversaries. The Korean War ended in 1953 with a temporary armistice, not a peace treaty. Washington’s failure to negotiate such a treaty tells a deeply insecure Pyongyang that the United States views its regime as illegitimate and ripe for forcible change.

By refusing to consider unconditional normalization of relations with North Korea, President Obama forfeited real opportunities to rein in its nuclear program. Instead, he continued holding huge annual military exercises with South Korea, complete with mock amphibious landings, which sent Pyongyang into “a frenzy of bloodthirsty threats and sabre rattling.”

North Korea’s ambassador to the United Nations told a reporter in November that diplomacy remains a viable option: “If (Trump) really gives up the hostile policy towards DPRK, withdrawing all the military equipment from South Korea, including the U.S. troops and coming to conclude the peace treaty, then I think it might be an opportunity to discuss the relations as we did in the 1990s.”

That was a rhetorical opening position, not a final demand, but it pointed to a peaceful way forward. Diplomacy offers no panacea. In particular, nothing will likely put North Korea’s nuclear genie back in its lamp anytime soon.

As Perry observed, “We lost the opportunity to negotiate with a non-nuclear North Korea when we cut off negotiations in 2001, before it had a nuclear arsenal. The most we can reasonably expect today is an agreement that lowers the dangers of that arsenal. The goals would be an agreement with Pyongyang to not export nuclear technology, to conduct no further nuclear testing and to conduct no further ICBM testing. These goals are worth achieving and, if we succeed, could be the basis for a later discussion of a non-nuclear Korean Peninsula.”

Joe Cirincione, a leading arms control expert, reminds us that “It was the negotiations, not the sanctions, that ultimately stopped Iran’s (nuclear) program.”

President Trump, a harsh critic of the nuclear treaty with Iran, now stands at a critical crossroads with North Korea. Will he heed the increasingly loud demands of interventionists for greater shows of force on the Korean peninsula, or channel candidate Trump and seek talks with Premier Kim? It’s no exaggeration to say that the fate of world peace may rest in part on his decision.

Jonathan Marshall is author of many recent articles on arms issues, including “Obama’s Unkept Promise on Nuclear War,” “How World War III Could Start,” “NATO’s Provocative Anti-Russian Moves,” “Escalations in a New Cold War,” and “Ticking Closer to Midnight.”

7 comments for “The Negotiation Option with North Korea”