Polls show that Americans are tired of endless wars in faraway lands, but many cheer President Trump’s showering money on the Pentagon and its contractors, a paradox that President Eisenhower foresaw, writes JP Sottile.

The Military-Industrial Complex has loomed over America ever since President Dwight D. Eisenhower warned of its growing influence during his prescient farewell address on Jan. 17, 1961. The Vietnam War followed shortly thereafter, and its bloody consequences cemented the image of the Military-Industrial Complex (MIC) as a faceless cadre of profit-seeking warmongers who’ve wrested control of the foreign policy. That was certainly borne out by the war’s utter senselessness … and by tales of profiteering by well-connected contractors like Brown & Root.

Over five decades, four major wars and a dozen-odd interventions later, we often talk about the Military-Industrial Complex as if we’re referring to a nefarious, flag-draped Death Star floating just beyond the reach of helpless Americans who’d generally prefer that war was not, as the great Gen. Smedley Darlington Butler aptly put it, little more than a money-making “racket.”

The feeling of powerlessness that the MIC engenders in “average Americans” makes a lot of sense if you just follow the money coming out of Capitol Hill. The Project on Government Oversight (POGO) tabulated all “defense-related spending” for both 2017 and 2018, and it hit nearly $1.1 trillion for each of the two years. The “defense-related” part is important because the annual National Defense Authorization Act, a.k.a. the defense budget, doesn’t fully account for all the various forms of national security spending that gets peppered around a half-dozen agencies.

It’s a phenomenon that noted Pentagon watchdog William Hartung has tracked for years. He recently dissected it into “no less than 10 categories of national security spending.” Amazingly only one of those is the actual Pentagon budget. The others include spending on wars, on homeland security, on military aid, on intelligence, on nukes, on recruitment, on veterans, on interest payments and on “other defense” — which includes “a number of flows of defense-related funding that go to agencies other than the Pentagon.”

Perhaps most amazingly, Hartung noted in TomDisptach that the inflation-adjusted “base” defense budgets of the last couple years is “higher than at the height of President Ronald Reagan’s massive buildup of the 1980s and is now nearing the post-World War II funding peak.” And that’s just the “base” budget, meaning the roughly $600 billion “defense-only” portion of the overall package. Like POGO, Hartung puts an annual price tag of nearly $1.1 trillion on the whole enchilada of military-related spending.

To secure their share of this grandiloquent banquet, the defense industry’s lobbyists stampede Capitol Hill like well-heeled wildebeest, each jockeying for a plum position at the trough. This year, a robust collection of 208 defense companies spent $93,937,493 to deploy 728 “reported” lobbyists (apparently some go unreported) to feed this year’s trumped-up, $700 billion defense-only budget, according to OpenSecrets.org. Last year they spent $128,845,198 to secure their profitable pieces of the government pie.

And this reliable yearly harvest, along with the revolving doors connecting defense contractors with Capitol Hill, K Street and the Pentagon, is why so many critics blame the masters of war behind the MIC for turning war into a cash machine.

But the cash machine is not confined to the Beltway. There are ATM branches around the country. Much in the way it lavishes Congress with lobbying largesse, the defense industry works hand-in-glove with the Pentagon to spread the appropriations around the nation. This “spread the wealth” strategy may be equally as important as the “inside the Beltway” lobbying that garners so much of our attention and disdain.

Just go to U.S. Department of Defense’s contract announcement webpage on any weekday to get a good sense of the “contracts valued at $7 million or more” that are “announced each business day at 5 p.m.” A recent survey of these “awards” found the usual suspects like Raytheon, Lockheed Martin and General Dynamics. The MIC was well-represented. But many millions of dollars were also “won” by companies most Americans have never heard of … like this sampling from one day at the end of October:

Clearly, the DoD is large enough, and smart enough, to award contracts to companies throughout the 50 states. Yes, it is a function of the sheer size or, more forebodingly, the utter “pervasiveness” of the military in American life. But it is also a strategy. And it’s a tactic readily apparent in a contract recently awarded to Raytheon. 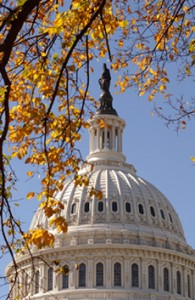 Frankly, it’s a brilliant move that began in the Cold War. The more Congressional districts that got defense dollars, the more votes the defense budget was likely to receive on Capitol Hill. Over time, it evolved into its own underlying rationale for the budget.

As veteran journalist William Greider wrote in the Aug. 16, 1984 issue of Rolling Stone, “The entire political system, including liberals as well as conservatives, is held hostage by the politics of defense spending. Even the most well intentioned are captive to it. And this is a fundamental reason why the Pentagon budget is irrationally bloated and why America is mobilizing for war in a time of peace.”

The peace-time mobilization Greider referred to was the Reagan build-up that, as William Hartung noted, is currently being surpassed by America’s “War on Terror” binge. Then, as now … the US was at peace at home, meddling around the world and running up a huge bill in the process. And then, as now … the spending seems unstoppable.

And as an unnamed “arms-control lobbyist” told Grieder, “It’s a fact of life. I don’t see how you can ask members of Congress to vote against their own districts. If I were a member of Congress, I might vote that way, too.”

Essentially, members of Congress act as secondary lobbyists for the defense industry by making sure their constituents have a vested interest in seeing the defense budget is both robust and untouchable. But they are not alone. Because the states also reap what the Pentagon sows … and, in the wake of the massive post-9/11 splurge, they’ve begun quantifying the impact of defense spending on their economies. It helps them make their specific case for keeping the spigot open.

Enter the National Conference of State Legislatures (NCSL), which notes, or touts, that the Department of Defense (DoD) “operates more than 420 military installations in the 50 states, the District of Columbia, Guam and Puerto Rico.” Additionally, the NCSL is understandably impressed by a DoD analysis that found the department’s “$408 billion on payroll and contracts in Fiscal Year 2015” translated into “approximately 2.3 percent of U.S. gross domestic product (GDP).”

And they’ve become a clearinghouse for state governments’ economic impact studies of defense spending. Here’s a sampling of recent data compiled on the NSCL website:

But that’s not all. According to the DoD study cited above, the biggest recipients of DoD dollars are (in order): Virginia, California, Texas, Maryland and Florida. And among the top 18 host states for military bases, electorally important states like California, Florida and Texas lead the nation. 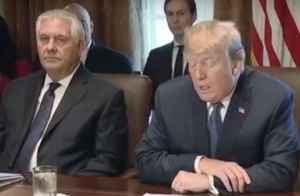 It’s a dirty little secret that Donald Trump exploited throughout the 2016 presidential campaign. Somehow, he was able to criticize wasting money on foreign wars and the neoconservative interventionism of the Bushes, the neoliberal interventionism of Hillary Clinton, and, at the same time, moan endlessly about the “depleted” military despite “years of record-high spending.” He went on to promise a massive increase in the defense budget, a massive increase in naval construction and a huge nuclear arsenal.

And, much to the approval of many Americans, he’s delivered. A Morning Consult/Politico poll showed increased defense spending was the most popular among a variety of spending priorities presented to voters … even as voters express trepidation about the coming of another war. A pair of NBC News/Survey Monkey polls found that 76 percent of Americans are “worried” the United States “will become engaged in a major war in the next four years” and only 25 percent want America to become “more active” in world affairs.

More to the point, only 20 percent of Americans wanted to increase the troop level in Afghanistan after Trump’s stay-the-course speech in August, but Gallup’s three decade-long tracking poll found that the belief the U.S. spends “too little” on defense is at its highest point (37 percent) since it spiked after 9/11 (41 percent). The previous highpoint was 51 percent in 1981 when Ronald Reagan was elected in no small part on the promise of a major build-up.

So, if Americans generally don’t support wars or engagement in the world, why do they seem to reflexively support massive military budgets?

Frankly, look no further than Trump’s mantra of “jobs, jobs, jobs.” He says it when he lords over the sale of weapon systems to foreign powers or he visits a naval shipyard or goes to one of his post-election rallies to proclaim to “We’re building up our military like never before.” Frankly, he’s giving the people what they want. Although they may be war-weary, they’ve not tired of the dispersal system that Greider wrote about during Reagan’s big spree.

Ultimately, it means that the dreaded Military-Industrial Complex isn’t just a shadowy cabal manipulating policies against the will of the American people. Nor is the “racket” exclusive to an elite group of Deep State swamp things. Instead, the military and the vast economic network it feeds presents a far more “complex” issue that involves millions of self-interested Americans in much the way Eisenhower predicted, but few are willing to truly forsake.

← What’s Wrong with Talking to North Korea?
The Scalp-Taking of Gen. Flynn →