Exclusive: President Trump’s reversal on the Afghan War – now promising to “win” not withdraw – further makes him a “war president” along with his “fire and fury” belligerence over North Korea, as Jonathan Marshall observes.

Say what you will about Charlottesville, the national debate over neo-Nazis at least took our minds off the threat of nuclear war with North Korea. With the start of U.S.-South Korean war games, that specter will quickly return to haunt us.

How worried should we be? The answer lies much more in Washington than in Pyongyang. The Kim regime has been almost entirely consistent in its policy: It means to keep building a credible nuclear arsenal, complete with ICBMs, until it has the capacity to deter a U.S. attack. For all its posturing and bombast, North Korea’s policy is fundamentally defensive.

In contrast, the Trump administration has sent a host of confusing messages. Some top officials buy into sane, defensive notions of mutual nuclear deterrence. Others, however, insist that Kim’s regime must be vanquished before it acquires greater nuclear capabilities. The fate of millions of people rests on which policy President Trump adopts.

One of Steve Bannon’s last declarations before being fired by the White House was that no “military option” exists for dealing with North Korea, because of the extraordinary damage a war would cause.

As I’ve discussed before, however, another influential Washington figure, Republican Senator Lindsey Graham of South Carolina, has lobbied Trump to order an all-out attack if Pyongyang continues testing missiles capable of reaching the United States — even if a war turns South Korea and Japan into wastelands.

Trumpologists are still struggling to interpret the ambiguous language coming out of the administration, despite Secretary of State Rex Tillerson’s claim that “we have been quite clear as to what the policy and the posture toward North Korea is.”

For example, after Trump warned earlier this month that further “threats” from North Korea would be met with “fire and fury,” Tillerson explained that the President was simply reminding Pyongyang of the consequences “if they . . . make a bad choice for themselves.”

But what constitutes “threats” or a “bad choice”? Verbal bluster? A missile launch in the direction of Guam? Or simply — as Graham argues — deployment of a few ICBMs? Does North Korea have any way of knowing where Trump draws the line?

Secretary of Defense Jim Mattis, who should know, describes U.S. policy as based on deterrence. The United States will ensure that North Korea faces “strong military consequences” if it “initiates hostilities.” In other words, our response would be proportionate. If North Korea launches a missile toward Guam, the U.S. military first would undertake to shoot it down, not start World War III. That sounds clear and reasonable enough.

But National Security Adviser H. R. McMaster said instead “the President’s been very clear about” the possibility of launching a preventive war: “He said he’s not going to tolerate North Korea being able to threaten the United States.” (emphasis added)

Similarly, Gen. Joseph Dunford, chairman of the Joint Chiefs of Staff, said recently in Beijing that while war with North Korea would be “absolutely horrific,” it would be even more “unimaginable” to let Pyongyang “develop ballistic missiles with a nuclear warhead that can threaten the United States.” That sure sounds like an endorsement of preventive war.

So does CIA Director Michael Pompeo’s declaration that “America is no longer going to have the strategic patience that . . . has permitted [Kim] to continue to develop his weapons program.” Even Secretary Tillerson, a relative peacemaker, termed North Korea’s mere testing of ICBMs “an unacceptable threat to us.”

Why would it be “unimaginable” and “unacceptable” for North Korea to deploy ICBMs aimed at the United States, as China and Russia do? One reason, suggested by McMaster, is that Kim has a death wish.

Yet experts on the regime, including Trump’s own Director of National Intelligence, are virtually unanimous that he is neither crazy nor suicidal. Pyongyang is certainly capable of being deterred — which explains why North Korea has initiated no major hostilities since the armistice of 1953.

The other, rarely discussed, reason to deem North Korea’s emerging nuclear capabilities “unacceptable” is because they will deter us, limiting America’s freedom of action in North Asia.

A map of the Korean Peninsula showing the 38th Parallel where the DMZ was established in 1953. (Wikipedia)

As the neoconservative Project for a New American Century warned in its enormously influential 2000 whitepaper Rebuilding America’s Defenses, “adversaries like Iran, Iraq and North Korea are rushing to develop ballistic missiles and nuclear weapons as a deterrent to American intervention.” Of all the vital missions for U.S. armed forces, it declared, preventing “lesser states” from gaining the ability to deter U.S. military action “must have priority.”

Trump’s Director of National Intelligence, Dan Coats, acknowledged that the “rationale” behind Kim’s efforts to acquire nuclear weapons is to ensure “survival for his regime, survival for his country.” Coats said Kim has “seen that having the nuclear card in your pocket results in a lot of deterrence capability.”

Coats noted that the alternative that Kim and the world “learned out of Libya giving up its nukes . . . is, unfortunately: If you had nukes, never give them up. If you don’t have them, get them.”

That’s why Pyongyang is so reluctant to negotiate away its nuclear program. “As long as the U.S. hostile policy and nuclear threat continue, [North Korea] . . . will never place its self-defensive nuclear deterrence on the negotiation table or flinch an inch from . . . the road of bolstering up the state nuclear force,” Kim told UN Secretary-General Antonio Guterres earlier this month.

As regional experts have observed, Kim’s modifier “as long as” does leave wiggle room for future talks to free the Korean peninsula of nuclear weapons. But it will likely take years — not months — of efforts to reduce tensions before Pyongyang will feel confident enough to consider disarming. Ironically, that process may actually be accelerated by North Korea acquiring a credible nuclear deterrent so it no longer fears a U.S. attack.

In the meantime, the White House needs to calm down and learn to live with mutual deterrence. That conclusion is surprisingly being reached even by some traditional hawks. 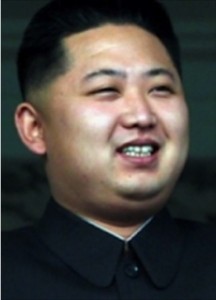 Eliot Cohen, a co-founder of the Project for a New American Century, states flatly, “The United States is simply not ready for a war in Korea, even if one were the lesser of two evils. . . . The American military may have the aircraft to hammer North Korean nuclear sites, but it is also fighting in Afghanistan, Iraq, and Syria, and returning to Europe to bolster deterrence there. . . . This could, in other words, all turn out much worse than even the president’s wary advisers, who know war (though far less ferocious war than this would likely be) may think.”

Similarly, Washington Post columnist Charles Krauthammer, a perennial militarist, now asserts that “war is almost unthinkable, given the proximity of the Demilitarized Zone to the 10 million people of Seoul. A mere conventional war would be devastating. And could rapidly go nuclear.”

“Acquiescence is not unthinkable,” he continued. “After all, we did it when China went nuclear under Mao Zedong, whose regime promptly went insane under the Cultural Revolution.”

Acquiescence doesn’t mean ignoring aggressive military provocations from North Korea, or pretending that the regime is anything but a human rights disaster.

But it should mean ending pointless rhetoric and military stunts aimed at “regime change” or “decapitation” of North Korea’s leadership. It should mean serious efforts to open talks toward a final Korean War peace treaty. It should mean listening to China when it offers good advice for lowering the political temperature on both sides. And it may, in time, mean reducing the U.S. military presence on the Korean peninsula, if North Korea responds favorably.

Above all, let’s not forget who really holds the cards here. As Doug Bandow reminds us, South Korea enjoys “roughly 40 times the economic strength and twice the population” of North Korea, “plus a host of other advantages.”

The United States is on the winning side. We just need to hold our temper. As Edmund Burke, that founder of modern conservative thought, once said, “Our patience will achieve more than our force.”