These flimsy, poorly-sourced allegations are being hammered into mainstream liberal consciousness on a daily basis now in the exact same way the discredited Russiagate psyop was, writes Caitlin Johnstone.

With overwhelming bipartisan support, the House Armed Services Committee has added a Liz Cheney-spearheaded amendment to the National Defense Authorization Act (NDAA) which throws severe roadblocks in the Trump administration’s proposed scale-down of US military presence in Afghanistan and Germany.

As The Intercept‘s Glenn Greenwald notes, both parties advancing the amendment cited in their arguments the completely unsubstantiated intelligence leak that was recently published by credulous mass media reporters alleging that Russia has paid bounties to Taliban fighters for killing the occupying forces in Afghanistan. Yet another western imperialist agenda once again facilitated by unforgivably egregious journalistic malpractice in the mass media. 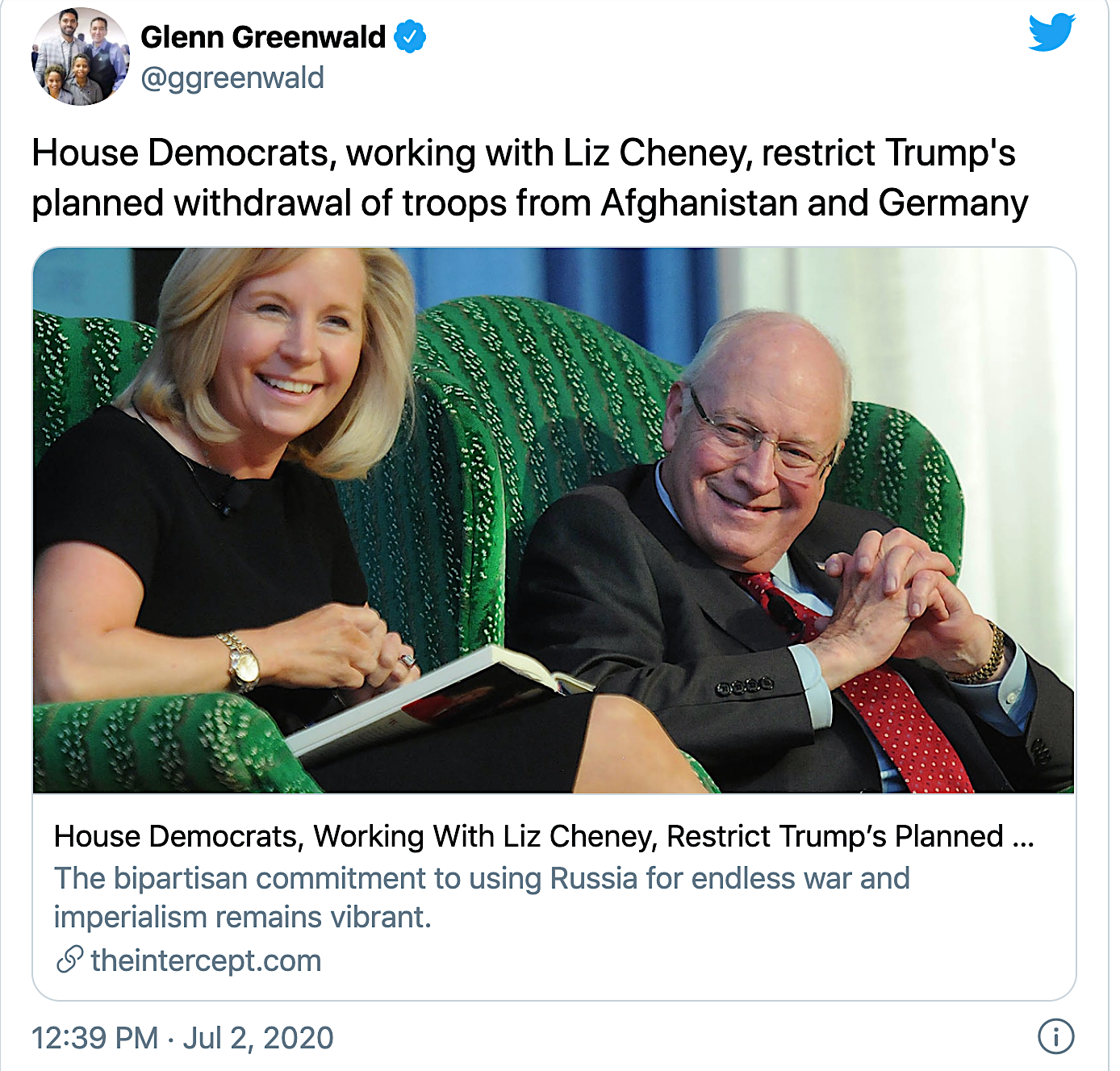 Every aspect of this development is enraging.

The mass media have continued to add to their mountain of Gish gallop fallacies promoting this narrative with a new Daily Beast report citing former senior Taliban figure Mullah Manan Niazi who asserts that “The Taliban have been paid by Russian intelligence for attacks on U.S. forces—and on ISIS forces—in Afghanistan from 2014 up to the present.” The Beast’s own article admits that its source has severe conflicts of interest and is believed to be a CIA asset by Taliban leadership, and that Niazi provided no evidence of any kind for his claim or any further details whatsoever.

These flimsy, poorly-sourced allegations are being hammered into mainstream liberal consciousness on a daily basis now in the exact same way the discredited Russiagate psyop was, and just like with Russiagate the narrative they are being used to shape helps advance military expansionism and new cold war escalations which just so happen to fit perfectly into pre-existing geostrategic agendas of planetary domination.

The way mainstream news outlets consistently refuse to account for a fact so obvious and indisputable as intelligence agencies being known liars should by itself be enough to discredit the entire institution of mass news reporting. Yet here we are with these reports being treated as established fact throughout the entire political/media class and down through the entire population of propagandized rank-and-file citizenry.

The Afghanistan Papers established conclusively that the occupation has been unwinnable and without a clear picture of what winning would even look like from the very beginning, and that this fact has been hidden from the world by systematic deceit for two decades. The revelation was in the news for a day and then quickly memory holed without having any meaningful impact on the dominant narrative about Afghanistan, and now the mainstream consensus is that even trying to reduce the number of troops there is a hazardous and outlandish notion.

This is because the mainstream consensus is shaped not by facts, but by narrative. We see this in the way the fact-filled Afghanistan Papers have played no role in shaping the dominant narrative about what should be done about the nineteen-year occupation, and we see it in the way the fact-free “bounty” narrative is shaping public opinion and determining US foreign policy. The propagandists who manufacture consent for imperialist agendas understand that truth and facts play far less of a role in what the propagandized consider important than does mindless repetition and emotion.

The Empire Files has an absolutely phenomenal mini-documentary on the Afghanistan occupation which came out the other day, and everyone should watch it. Abby Martin quickly breaks down the geostrategic, resource control, and military-industrial complex agendas which are advanced by this interminable war, the deceit and depravity which went into initiating and maintaining it, and the devastating toll it has taken on the Afghan people. I strongly encourage my readers to give it a view when you get the chance.

The continued Afghanistan occupation is like if the police stormed a house, shot a bunch of people, realized they got the wrong house and they’d never find the guy they were looking for by staying there, stayed anyway, moved in, and then years later said they can’t move out because they heard a rumor that the neighbors are trying to make them leave.

In a sane world it would be the violent invasion and occupation of sovereign nations which elicits outrage and opposition from elected officials and intense skepticism and critical reporting from prominent journalists. In today’s propaganda-maddened society we get the exact opposite: the invasions and occupations are treated as the normal default position and any attempt to end them is regarded as outlandish.

This cannot continue. We must find a way to awaken from the brainwashing and force it to end. Anyone who works to prevent this from happening is an enemy of human progress.

19 comments for “Seriously, Get the Hell Out of Afghanistan”