In 1932, as in 2020, the nation experienced an explosion of civil unrest on the eve of a presidential election, writes James N. Gregory. 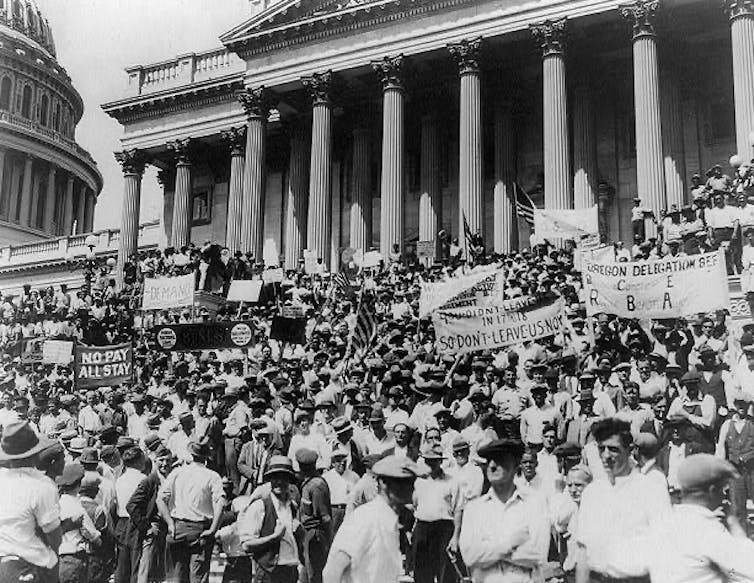 The Bonus Army stages a demonstration at the empty Capitol on July 2, 1932.
(Underwood and Underwood, photographers; Library of Congress)

An election looms. An unpopular president wrestles with historic unemployment rates. Demonstrations erupt in hundreds of locations. The president deploys Army units to suppress peaceful protests in the nation’s capital. And most of all he worries about an affable Democratic candidate who is running against him without saying much about a platform or plans.

I am a historian and director of the Mapping American Social Movements Project, which explores the history of social movements and their interaction with American electoral politics.

The parallels between the summer of 1932 and what is happening in the U.S. currently are striking. While the pandemic and much else is different, the political dynamics are similar enough that they are useful for anyone trying to understand where the U.S. is and where it is going. 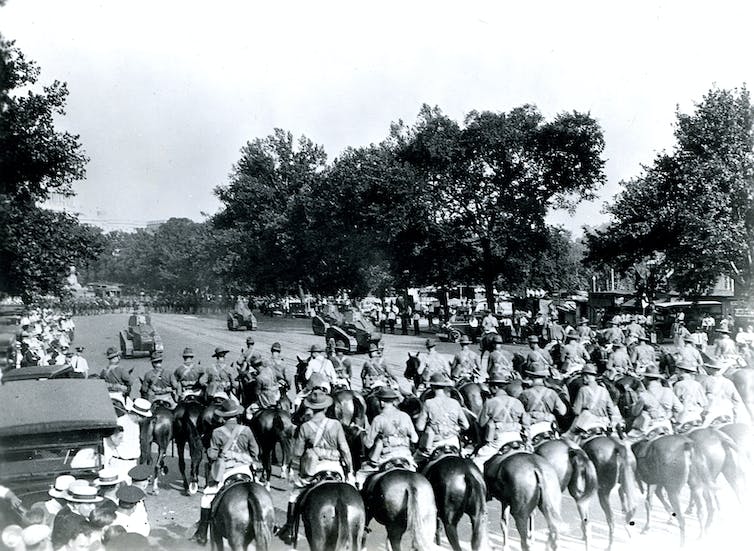 In 1932, as in 2020, the nation experienced an explosion of civil unrest on the eve of a presidential election.

The Great Depression had deepened through three years by 1932. With 24% of the work force unemployed and the federal government refusing to provide funds to support the jobless and homeless as local governments ran out of money, men and women across the country joined demonstrations demanding relief.

Our mapping project has recorded 389 hunger marches, eviction fights and other protests in 138 cities during 1932.

Although less than the thousands of Black Lives Matter protests, there are similarities.

Atlanta authorities announced in June 1932 that 23,000 families would be cut from the list of those eligible for the meager county relief payments of 60 cents per week per person allocated to whites (less for blacks). A mixed crowd of nearly 1,000 gathered in front of the Fulton County Courthouse for a peaceful demonstration demanding $4 per week per family and denouncing racial discrimination.

The biracial protest was unprecedented in Atlanta and yielded two results. The eligibility cuts were canceled, and police promptly hunted down one of the organizers, a 19-year-old black communist named Angelo Herndon. He was charged with “inciting to insurrection,” a charge that carried the death penalty. Lawyers spent the next five years winning his freedom. 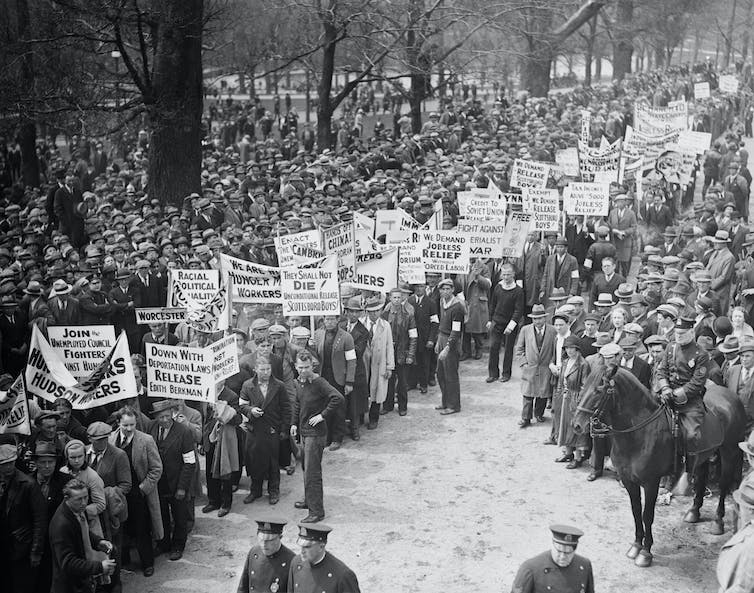 Hundreds of unemployed “Hunger Marchers” protest on Boston Common on their way to the State House, demanding unemployment insurance and other relief measures, May 2, 1932. (Bettman/Getty)

But race was not the key issue of the 1932 protest wave. It was government’s failure to rescue the millions in economic distress.

Organizations representing the unemployed – many led by communists or socialists – had been active since 1930, and now in the summer of 1932 protests surged in every state. Here are examples from the Mapping American Social Movement Project timeline from one week in June:

Hundreds of Chicago police mobilize to keep unemployed demonstrators at bay at the start of the Republican Party nominating convention.

A so-called “hunger march” of 3,000 jobless in Minneapolis ends peacefully, but in Bloomington, Indiana, police use tear gas on 1,000 demonstrators demanding relief, while in Pittsburgh unemployed supporters crowd a courthouse to cheer the not-guilty verdict in an “inciting to riot” case.

Police break up a march by 200 unemployed in Argo, Illinois, and a much larger protest by jobless in Rochester, New York. In Lawrence, Massachusetts, 500 protesters successfully demanded an end to evictions of unemployed mill workers; in Pittsburgh, protesters block the eviction of an unemployed widow. The same day in Kansas City, a mostly black crowd of 2,000 pleads unsuccessfully with the mayor to restore a recently suspended relief program.

The unemployed protests in urban areas of 1932 seem similar to today’s protest culture, but that was not true in the farm belt.

Dealing with collapsing prices and escalating farm evictions, farmers in many regions staged near-uprisings. Black farmers in the cotton belt braved vigilante violence when, by the thousands, they joined the Alabama Sharecroppers Union, which advocated debt relief and the right of tenant farmers to market their own crops.

Newspaper headlines focused on the white farmers mobilizing in Iowa, Wisconsin, Nebraska, Minnesota and the Dakotas in the summer of 1932. The Farmer’s Holiday Association formed that year pledging to strike (“holiday”) to raise farm prices. The strike that began on Aug. 15 involved sometimes heavily armed white farmers blocking roads to stop the shipment of corn, wheat, milk and other products. The strike withered after a few weeks, but farmers had sent a message, and some state legislatures quickly enacted moratoriums on farm foreclosures.

Counties that today are marked as Trump territory distinguished themselves in 1932 as centers of what became known as the “Cornbelt Rebellion.” 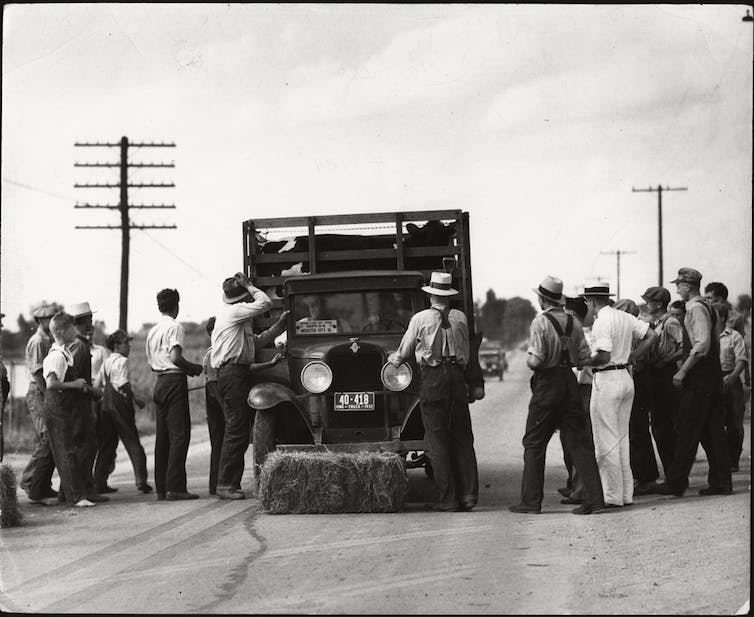 Periods of grassroots protest and civil unrest interact in unpredictable ways with presidential elections. In 1932, unrest helped Franklin Roosevelt defeat incumbent Herbert Hoover. Again, there are similarities between that summer and this one.

Democratic presidential candidate Roosevelt, like today’s Democratic candidate, Joe Biden, enjoyed the luxury of running on platitudes instead of programs. Roosevelt used the phrase “new deal” in his nomination acceptance speech, but details were few and it was not until he took office that the phrase acquired real meaning.

Roosevelt could avoid commitments because the political dynamics of 1932 forced the incumbent to play defense, much like today.

Herbert Hoover was no Trump, almost the opposite. Cautious, principled, quiet, a moderate Republican, he had made major errors in the first years of the Depression, and his reputation never recovered. Democrats accused him of inaction (which was not true), while the unemployed movements fixed the label “Hoovervilles” on the homeless encampments and shacktowns that sprang up in cities across the country.

Hoover’s credibility was further damaged in the summer of 1932 when more than 15,000 World War I veterans converged on Washington, D.C. under the banner of the Bonus Expeditionary Force, commonly called the Bonus Army. They demanded that Congress immediately pay them the bonuses they were due to get in 1945.

When the Senate rejected the proposal, the Bonus Army settled into a massive encampment across the Anacostia River from Capitol Hill. 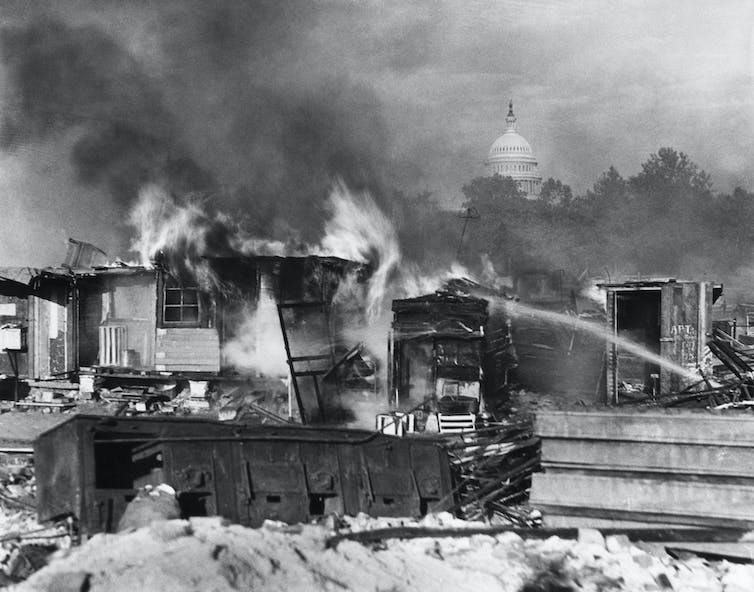 Shacks burned by the U.S. Army in the shantytown constructed by protesters called the ‘Bonus Army’ after they were forced out by the military. (Bettmann/Getty)

A month later, Hoover called in U.S. Army troops. During a night of violence, the army burned thousands of tents and shacks and sent the Bonus Army marchers fleeing.

For Hoover, the deployment of U.S. Army units played out much as it did for Trump this May, when he had Lafayette Park violently cleared of protesters. Hoover’s action deepened his image problems and strengthened the sense that he lacked compassion for those in need, including those who had fought for their country only 14 years earlier.

Hoover tried to mobilize a backlash against the summer of protests, claiming that Communists were behind all of the unrest, including the Bonus Army, which in fact had banned all Communists. It didn’t work: Roosevelt won in a landslide. 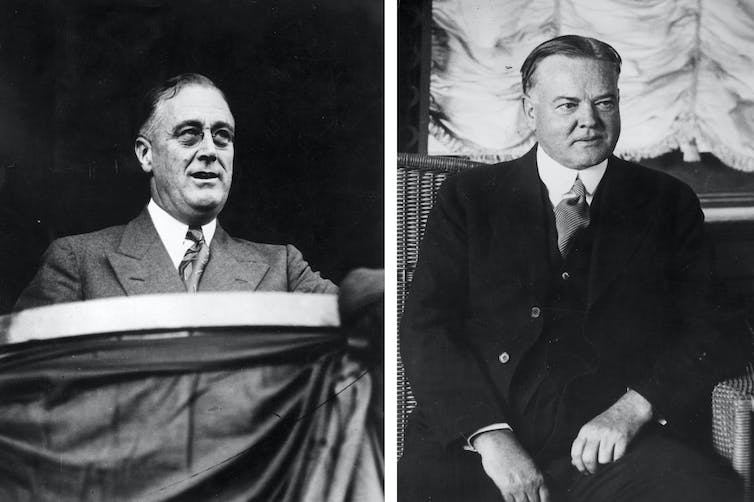 In the end, the protests helped Democrats in the election of 1932. In Congress, Democrats gained 97 House seats and 12 in the Senate, taking control of Congress for the first time since 1918. And equally significant, they helped propel the agenda of the New Dealers, as the new administration prepared to take power and launch the ambitious legislation of the first 100 days.

Three years of grassroots action had forced even reluctant politicians to recognize the urgency of reform. The early New Deal would race to provide debt relief for farmers and homeowners, jobs for the unemployed, and public works projects – part of what demonstrators had been demanding for years.

James N. Gregory is a professor of history at the University of Washington.

← Seriously, Get the Hell Out of Afghanistan
BOUNTYGATE: Why Didn’t Haspel Demand an Oval Office Meeting? →

10 comments for “A Summer of Protest, Unemployment & Presidential Politics – Welcome to 1932”