The safety of U.S. soldiers in Afghanistan does not appear to be the motive in intelligence agency leaks to the media about the alleged Russian “bounties,” says Joe Lauria.

The Los Angeles Times reported Thursday night that a complete withdrawal of U.S. troops from Afghanistan, which Donald Trump had demanded, has been put off until after the U.S. presidential election in November.

Maintaining imperial interests in Afghanistan seems to be one of the main reasons for the so-far uncorroborated, possibly cooked-up “scandal” known now as Bountygate.

Other motives appear to be the same twofer that was at the core of Russiagate: first, unnamed intelligence officials meddling in domestic U.S. politics, this time to undermine Trump’s re-election campaign; and, second, to even further demonize and pressure Russia.

The public has been subjected to daily morsels of supposedly factual stories meant to further deepen the plot. The first item dropped online on June 26 with The New York Times’ initial reporting on the say-so of “American intelligence officials.”

It seemed yet another attempt to launder disinformation through big media, giving it more credibility than if it had come directly from the security services. A discerning reader, however, would want more than the word of a bunch of spooks who make a living practicing deception.

The “evidence” for the story that Russia paid the Taliban to kill U.S. soldiers came from interrogation of Afghan detainees. If the interrogations were “enhanced” the evidence is even more unreliable.

For the record, Consortium News supports no candidate and has been a strong critic of Trump. But we see intelligence agencies’ insertion into domestic politics to be a greater threat than even eight years of Trump for the precedent it is setting. As spooks like to say, “Administrations come and go. And we’re still here.” 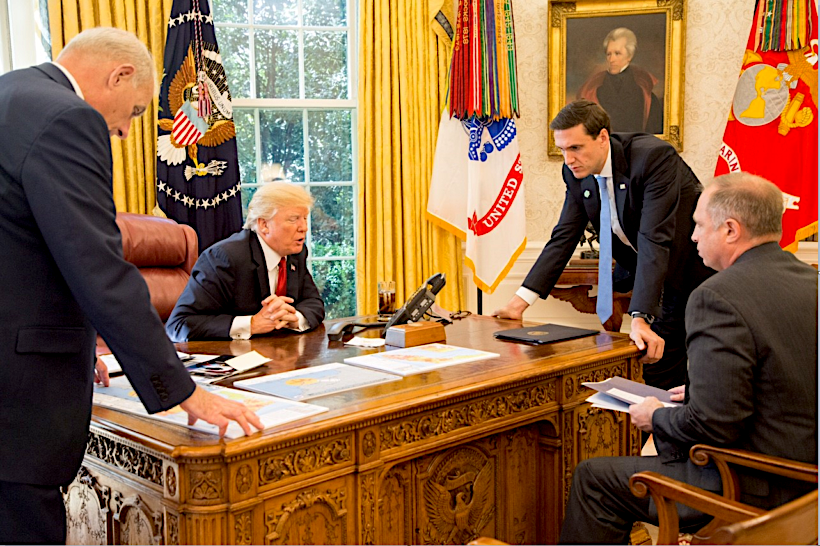 A main purpose of this planted Times story was made clear in the following paragraph, and it’s been the constant theme since, seized on by Trump critics from the Lincoln Project to Democratic candidate Joe Biden:

“The intelligence finding was briefed to President Trump, and the White House’s National Security Council discussed the problem at an interagency meeting in late March, the officials said. Officials developed a menu of potential options — starting with making a diplomatic complaint to Moscow and a demand that it stop, along with an escalating series of sanctions and other possible responses, but the White House has yet to authorize any step, the officials said.” [Emphasis added.]

The inference is that Trump knew about it for months and didn’t do anything, obviously because he’s a Kremlin agent.

American soldiers’ lives are in danger and Trump has done nothing to stop it.

Trump said he was unaware of the “intelligence.” John Ratcliffe, the director of national intelligence, put out a statement on June 27 saying Trump had not been briefed on it.

But the Times that day quoted an “American intelligence official” (another one or the same?) saying:

“…it was included in the President’s Daily Brief, a written document which draws from spywork to make analytic predictions about longstanding adversaries, unfolding plots and emerging crises around the world. The briefing document is given to the president to read and they serve as the basis for oral briefings to him several times a week.”

The Times did not say that Trump was orally told about it. I suspect the CIA gave it to him only in print, and knowing Trump doesn’t entirely read his daily written briefings, did not orally tell him, making him out to be a liar by leaking this information.

But this raised the immediate question: If this were such an urgent matter that Trump had ignored for more than three months, why hadn’t CIA Director Gina Haspel demanded, in all that time, an immediate Oval Office meeting with Trump to urge him to act? After all, isn’t the CIA’s job supposed to be to protect Americans?

“If this was even close to being confirmed, Haspel would have briefed directly given the sensitivity of the subject,” Scott Ritter, a former U.S. counterterrorism officer, told me by email.  Haspel, distancing herself from the controversy, put out a statement condemning the leaks to the Times, saying they “compromise and disrupt the critical interagency work to collect, assess, and ascribe culpability.”

Clearly the purpose of this leaked story was not to protect the lives of American soldiers. 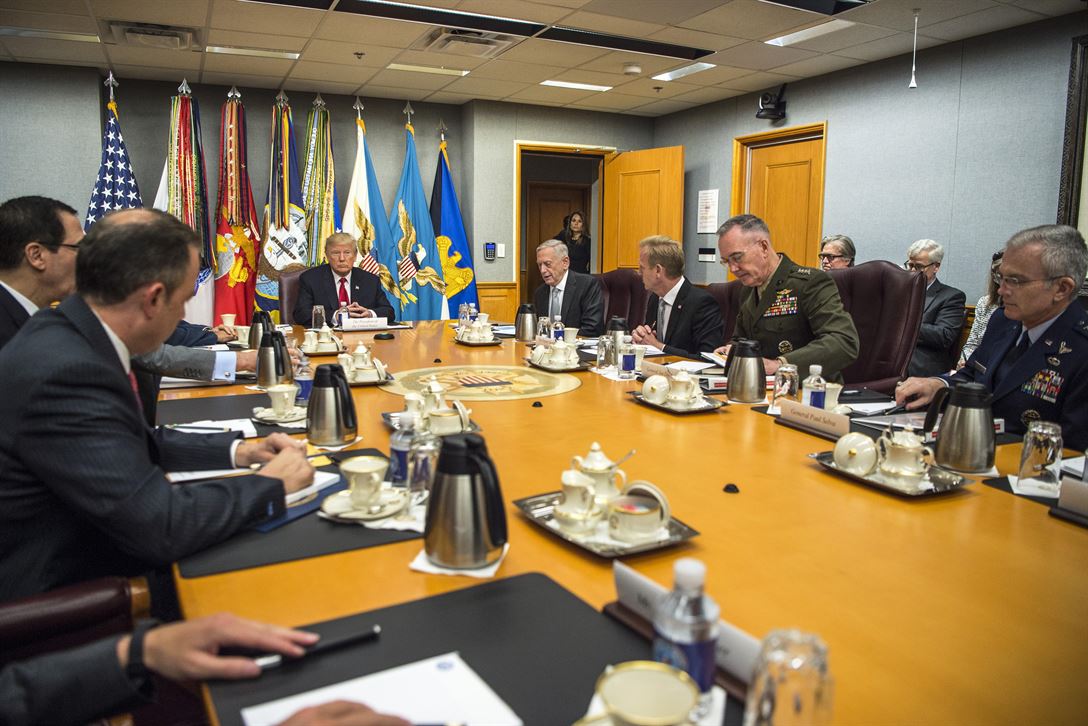 Trump speaks to members of the National Security Council during a meeting at the Pentagon in 2017. (DoD photo by Army Sgt. Amber I. Smith)

“Because the allegations in recent press articles have not been verified or substantiated by the Intelligence Community, President Trump had not been briefed on the items,” said Robert O’Brien, the national security advisor.

“We are still investigating the alleged interference referenced in media reporting and we will brief the President and Congressional leaders at the appropriate time,” said John Ratcliffe, director of national intelligence.

Pentagon spokesman Jonathan Hoffman said in a statement: “The Department of Defense continues to evaluate intelligence that Russian GRU operatives were engaged in malign activity against United States and coalition forces in Afghanistan. To date, DOD has no corroborating evidence to validate the recent allegations found in open-source reports.”

Ray McGovern, the former CIA analyst, said: “I helped prepare The President’s Daily Brief for Presidents Nixon, Ford, and Reagan, and personally conducted the one-on-one morning briefings in the Oval Office from 1981 to 1985. In those days we did our best to corroborate reporting — especially on highly sensitive issues — and did not try to cover our derrieres by alerting the president and his top aides to highly dubious reporting, however sexy.”

The Wall Street Journal reported that the NSA “strongly dissented” from the assessment on the bounties, citing “people familiar with the matter.”

Even the anti-Putin Moscow Times doesn’t buy the story.

Even Galeotti is calling bullshit on #BountyGate: "despite the claims that Trump is “Putin’s puppet,” U.S. policy towards Russia is already tougher than at any point since 1991". But for Langley's Acela Corridor marks, this story a matter of faith.https://t.co/vy08aDdStN

The initial story has been followed up by new leaks nearly every day. First we heard from the Times of an electronic transfer from a bank account controlled by the GRU, Russian military intelligence, to the Taliban. We are not told what this money was for. Was there a line item for “killing American soldiers?” The Times reports:

“Though the United States has accused Russia of providing general support to the Taliban before, analysts concluded from other intelligence that the transfers were most likely part of a bounty program that detainees described during interrogations.” [Emphasis added.]

“Other intelligence” that is not cited “most likely” meant it was part of the bounty “program” is hardly convincing reporting.

Anyone who knows anything about intelligence operations knows that such payments would be made by cash on the ground in Afghanistan and not by leaving a discoverable paper trail. The cash would come from Russian officials in Afghanistan, not wired to a Taliban account. This is the same portrayal of a bumbling, unprofessional Russian intelligence service that supposedly left Cyrillic letters and the name of the first Soviet secret police chief in the metadata of its alleged hacks of the DNC. At the same time we are meant to be deathly afraid of these “amateurs.”

The alleged money sent by bank transfer was supposedly handed out in cash on the battlefield by a “lowly drug dealer” who puzzled his neighbors because he was suddenly driving a fancy car. But wait, Rahmatullah Azizi, the Times says, got the cash in Russia:

“U.S. intelligence reports named Mr. Azizi as a key middleman between the G.R.U. and militants linked to the Taliban who carried out the attacks. He was among those who collected the cash in Russia, which intelligence files described as multiple payments of ‘hundreds of thousands of dollars.’” [Emphasis added.]

This contradicts the Times‘ earlier story that the money was transferred electronically. Now the cash was collected in Russia. Azizi associates were arrested and a half-million dollars was found in his house. The Times, however, does not say what they were charged with.

“Just how the money was dispersed to militants carrying out attacks for the Taliban, and at what level the coordination occurred, remains unclear,” the Times reports. Indeed. In an earlier era of journalism that would incite an editor to bark, “Don’t put it in the story until you find out.”

The three goals of the leaks are being accomplished:

The LA Times story said the decision to keep a little more than 4,000 troops there was made “late last month,” around the time The New York Times story broke.

“The plan, worked out at a meeting between Pentagon and White House officials late last month, would represent an about-face for President Trump. He has pushed for a complete withdrawal of the 8,600 troops now in Afghanistan by the election, seeing a pullout as a much-needed foreign policy achievement as his reelection prospects have deteriorated. Trump had only recently told advisors that a full and rapid pullout could blunt the controversy over intelligence reports that Russia has paid militants to kill American service members, one official said.”

Please Contribute to
Consortium News on its 25th Anniversary

← A Summer of Protest, Unemployment & Presidential Politics – Welcome to 1932
RAY McGOVERN: Mutiny on the Bounties →