The new Italian government is taking comfort in some of Trump’s positions, especially on migration, trade and Russia, says Andrew Spannaus.

During the 2016 United States election campaign, most of Italy’s political class and media adopted the standard line about how Donald Trump was a grave threat to the stability of the Western world.

Unlike previous Italian governments, which toed the pro-globalization line, the new government in Rome, supported by the anti-system Five Star Movement and the right-wing League, seems ready to view Trump as an opening, not a disaster.

For the new Italian leaders, Trump’s victory presents a number of opportunities for Italy. It has opened a way to potentially link the anti-establishment vote in both countries and across Europe by addressing the negative effects of globalization on the middle and lower classes, as well as challenge disastrous “regime change” policies that breed instability.

Italian Prime Minister Giuseppe Conte began revealing his hand at the G-7 summit in Charlevoix, Canada in June, shortly after he was chosen by the two populist parties as a compromise figure to lead the government. At the summit, he was the only other leader to support Trump’s call to allow Russia to rejoin the group. Conte also refused to join with other European leaders in railing against the threat of tariffs wielded by Washington to obtain concessions on trade. During Conte’s visit to the White House on July 30, he confirmed this position, seeking ways the two countries could work more closely together. 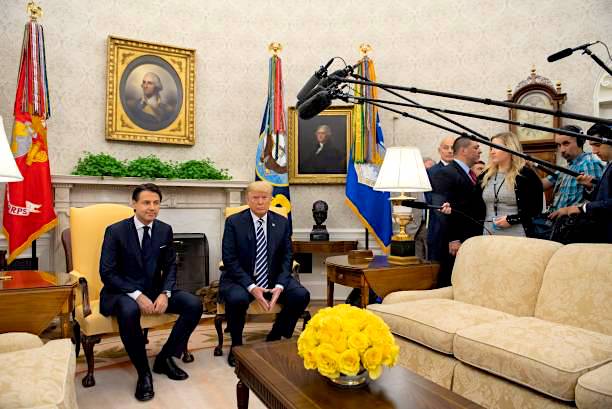 The first common issue is how to deal with the chaos in Libya. In 2011, French President Nicolas Sarkozy—with the help of then-U.S. Secretary of State Hillary Clinton—successfully convinced President Barack Obama to launch a “humanitarian intervention” that led to the ouster and killing of Libyan leader Muammar Gaddafi. What followed was a period of instability that persists to this day. For Italy in particular, the war has been disastrous on two fronts: it has hit its economic interests and increased human trafficking and the flow of refugees and migrants across the Mediterranean.

Italy is the Western country with the strongest ties to Libya, a former Italian colony. Italy has invested heavily there, including through the construction of transport, military and housing infrastructure in the form of reparations for colonialism under a 2008 agreement with Gaddafi. Ties are strong in the energy sector as well, as the Italian conglomerate Eni manages numerous oil and gas fields there, providing about 20 percent of the company’s overall hydrocarbon production.

When NATO bombs were unleashed in 2011, the French military had included Eni infrastructure among its targets, according to then Italian Foreign Minister Franco Frattini. The Italian oil assets were apparently never hit.  But armed groups continue to attack oil pipelines and hinder oil exports, including Eni’s.

The targeting of Eni infrastructure has led to a belief in Italy that one goal of the Libyan war for France was to wrest control of Italy’s Libyan energy resources. Corroboration has come from the Clinton emails published first by WikiLeaks, and subsequently released in part by the State Department itself. Clinton aide Sidney Blumenthal sent intelligence assessments regarding Sarkozy’s motives in attacking Libya, which included “a desire to gain a greater share of Libya oil production.” Other emails show this meant cancelling existing oil concessions (such as those granted to Eni), and reassigning them to France’s Total. (Another major goal was to stop Gaddafi from creating a new pan-African currency which would supplant the CFA, the French franc used in French-speaking African countries.)

Italy also has borne the brunt of the increase in immigration passing through Libya. The north African country has become a hub for migrant and refugee passage, with ruthless traffickers exploiting and torturing people who hope to make it to Europe. 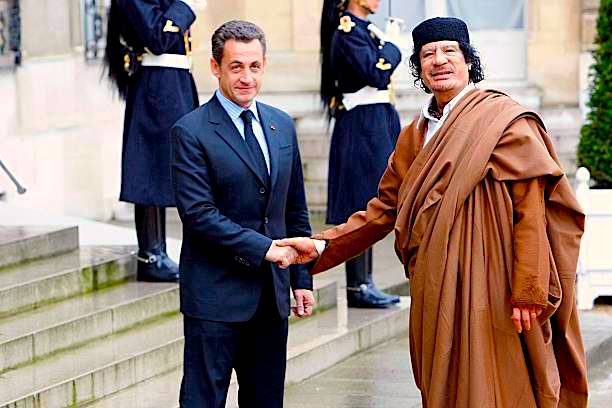 The elimination of the Gaddafi regime contributed strongly to the wave of desperate humans trying to make it to Italy, with over 90 percent of them arriving from Libya.

The political result has been strong anti-immigrant sentiment in Italy that contributed significantly to the League’s March election success. The new Italian government has sought to block all arrivals not controlled by its coast guard and force other European countries to share the burden of those who are granted entry. This has led to claims that Italy is ignoring the humanitarian needs of desperate people. The Italians counter that European neighbors are refusing to do their part, having closed their borders within Europe despite their obligations under the Schengen Agreement that guarantees free movement of peoples throughout the EU.

Not surprisingly, Trump has offered his support to Conte, praising the Italian government’s approach and suggesting that Europe as a whole should reintroduce strong borders. Trump’s support on Libya can be of most help to Italy.

France continues to seek dominance in Western policy on Libya, while Italy aims to regain its leading role in the area, despite being seen as a second-tier power in Europe. After the bilateral meeting at the White House, sources told the Italian press that Italy could count on U.S. support for the Libya conference Conte is organizing in Rome this fall. Trump said: “We recognize Italy’s leadership role in the stabilization of Libya and North Africa.”

To Russia With Love

Trump and the Italian government also see eye to eye on Russia. Few people in Italy appear to support continuing the sanctions and deploying additional military personnel and equipment toward the East. Many Italians also would seem to welcome a shift away from the New Cold War mentality, but without rupturing the Western alliance.

So far, Trump’s openness to diplomacy with Russian President Vladimir Putin hasn’t brought much actual change. In fact, last month’s NATO summit produced a series of commitments for further NATO deployments toward Russia’s borders. But Italy’s desire for better relations with Russia, without alienating the U.S., is being facilitated by Trump’s approach to Moscow.

Conte and Trump skirted the Iran nuclear deal, over which Italy and the U.S. disagree. Italy has long been a major economic partner of the Islamic Republic. Though there is debate within institutions in Rome over the best approach to Iran, there’s no question many Italian companies stand to lose from Trump’s decision to reimpose sanctions.

On trade with Europe Trump has followed his usual method: talk tough and make threats, hoping to obtain concessions. The first shot was Trump’s imposition of tariffs on steel and aluminum, prompting Brussels to retaliate on a raft of American imports, including bourbon, motorcycles and numerous food items. Then Trump threatened 20 percent tariffs on European automobiles unless the EU reduced barriers to U.S. products. 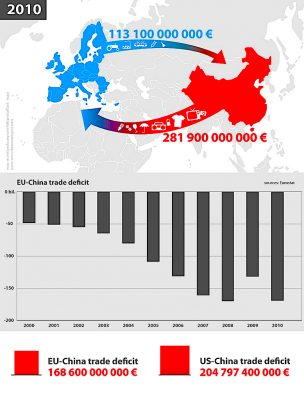 The European Commission responded with a threat of over $300 billion in tariffs on American goods. Ultimately, a deal was reached in which the two sides committed to “work together towards zero tariffs.” The White House claimed victory after EU concessions in the energy and food sectors. More significantly, Europe appears to be siding with Trump over China on trade.

After his July 30 meeting with Trump, Conte agreed on the need to review the terms of China’s participation in the World Trade Organization. China still is accorded the status of a developing nation, which allows it to maintain higher tariffs and restrictions than its Western counterparts in many sectors. China has made great strides in improving living conditions for its population, but has a long way to go to deal with internal imbalances and inequality.

While the growth of the Chinese middle class represents an important opportunity for European industry, low-cost production from China and other developing nations has cost millions of jobs in developed countries, supplanting many Western industries during the process of globalization in recent decades.

Italy maintains a competitive advantage in many advanced manufacturing sectors—as do other European countries, led by Germany—but that advantage is waning as other nations reach higher levels of development. Italy must compete on quality, not quantity, overcoming the negative effects of unbalanced competition with China with its low costs and disparities in rules and regulations.

Limits of the EU

The populist Italian government is also seeking a more general challenge to the decades-old neoliberal economic system, which the Trump administration has supported.  It is premature to think that Italy and the U.S. have established a new partnership, given uncertainty on both sides. Even on rare occasions when Trump pursues reasonable goals, he is inconsistent and must do battle with many sides in the U.S.—even within his own administration. The Italian government is in a similar situation, with the European establishment putting roadblocks in the way to prevent wholesale changes in economic policy.

Seeking U.S. support outside the confines of the EU is in Italy’s interest, but raises concerns among those who look with disdain on Trump and his mistrust of supranational institutions. If EU countries act on their own, the idea of a common foreign policy loses credibility, strengthening the arguments of those who oppose further integration.

The problem is that the pro-EU forces so far have failed to address the issues leading to the populist revolt, whether economic or in foreign policy. Repeating the mantra that European nations must act as a bloc doesn’t solve the fundamental problems facing the member states. If Brussels won’t face its own failures, more conflict will be inevitable, and the alliance between populist forces will likely continue to grow.

Andrew Spannaus is a journalist and strategic analyst based in Milan, Italy. He was elected chairman of the Milan Foreign Press Association in March 2018. He has published the books “Perché vince Trump” (“Why Trump is Winning” – June 2016) and “La rivolta degli elettori” (“The Revolt of the Voters” – July 2017).

← Trump-Media Logrolling
How to Beat a Manipulator →

20 comments for “For Italy, Trump Represents a ‘Populist’ Opportunity”