Hundreds of mainstream newspapers on Thursday have coordinated editorials against Trump’s attacks on the press, but as Sam Husseini explains, the major media need to do some soul-searching itself.

Today, hundreds of newspapers, at the initiative of The Boston Globe, are purporting to stand up for a free press against Trump’s rhetoric.

Today also marks exactly one month since I was dragged out of the July 16 Trump-Putin news conference in Helsinki and locked up until the middle of the night.

As laid in my cell, I chuckled at the notion that the city was full of billboards proclaiming Finland was the “land of free press“.

So, I’ve grown an especially high sensitivity to both goonish behavior toward journalists trying to ask tough questions — and to those professing they are defending a free press when they are actually engaging in a marketing exercise.

As some have noted, the editorials today will likely help Trump whip up support among his base against a monolithic media. But, just as clearly, the establishment media can draw attention away from their own failures, corruptions and falsehoods simply by focusing on Trump’s.

Big media outlets need not actually report news that affects your life and point to serious solutions for social ills. They can just bad mouth Trump. And Trump need not deliver on campaign promises that tapped into populist and isolationist tendencies in the U.S. public that have grown in reaction to years of elite rule. He need only deride the major media.

They are at worst frenemies. More likely, at times, Trump and the establishment media log roll with each other. The major media built up Trump. Trump’s attacks effectively elevate a select few media celebrities.

My case is a small but telling one. Major media outlets were more likely to disinform about the manhandling I received in my attempt to ask about U.S., Russian and Israeli nuclear threats to humanity — I’ll soon give a detailed rebuttal to the torrent of falsehoods, some of which I’ve already noted on social media — than to crusade against it. 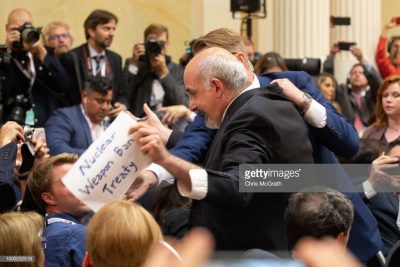 Husseini: Dragged out for wanting to ask a question.

Other obvious cases: None of the newspaper editorials I’ve seen published today mention the likely prosecution of Wikileaks. If there were solidarity among media, the prospect of Julian Assange being imprisoned for publishing U.S. government documents should be front and center today.

Neither did I see a mention of RT or, as of this week, Al Jazeera, being compelled to register as foreign agents. State Department Spokesperson Heather Nauert has openly refused to take questions from reporters working for Russian outlets. Virtual silence — in part because Russia is widely depicted as the great enemy, letting U.S. government policy around the world off the hook.

The above are actual policies that the Trump administration has pursued targeting media — not rhetoric that dominates so much establishment coverage of Trump.

Then there’s the threat of social media.

My day job is with the Institute for Public Accuracy. Yesterday, I put out a news release titled “Following Assassination Attempt, Facebook Pulled Venezuela Content.” Tech giants can decide — possibly in coordination with the U.S. government — to pull the plug on content at a time and manner of their choosing.

You would think newspaper people might be keen to highlight the threat that such massive corporations thus pose, not least of all because they have eaten up their ad revenue.

The sad truth is that this is what much of the media have long done: Counter to the lofty rhetoric of many of today’s editorials, the promise of an independent and truth-seeking press has frequently been subservient to propaganda, pushing for war or narrow economic and other interests.

The other major story of the day — quite related to this — is that of Trump pulling former CIA Director John Brennan’s security clearance. NPR tells me this is an attempt to “silence a critic.” But Brennan has an op-ed in today’s New York Times and is frequently on major media. He oversaw criminal policies during the Obama administration, including drone assassinations. If anything, this has elevated Brennan’s major media status.

Those who have been truly silenced in the “Trump era” are those who were critical of the seemingly perpetual U.S. government war machine since the invasion of Iraq.

Trump attacks on the establishment media — like many media attacks on him — are frequently devoid of substance. But recently one of his rhetorically tweets stated that media “cause wars“. I would say “push for war”, but that’s quibbling.

Trump is technically right on that point, but it’s totally disingenuous coming from him. He’s actually been the beneficiary of the media compulsion he claims to deride. When he exalts U.S. bombing strikes in Yemen, Syria and elsewhere, CNN calls him “presidential“.

Many consider “Russia-gate” critical to scrutinizing the Trump administration, but the two reporters, apparently picked by the White House, during the Helsinki news conference focused on “Russia-gate” — which eventually led to Brennan and others attacking Trump as “treasonous”. Meanwhile, much more meaningful collusion that can be termed Israel-gate is being ignored as the U.S. and Israeli governments attempt to further mold the Mideast.

The need for genuinely free sources of information is greater than ever. It is unclear to me if traditional newspapers can be part of the equation. Quite likely, the institutions desperately needed to carry out that critical mission are yet to be born.

← Trump Strikes Back at ‘Ringleader’ Brennan
For Italy, Trump Represents a ‘Populist’ Opportunity →