Exclusive: The murder of a fifth Iranian scientist on the streets of Tehran had all the earmarks of an Israeli-sponsored assassination. The killing also worsened tensions at a moment when the momentum toward war with Iran seems unstoppable, reports Robert Parry.

For many Americans the progression toward war with Iran has the feel of cattle being herded from the stockyard into the slaughterhouse, pressed steadily forward with no turning back, until some guy shoots a bolt into your head.

Any suggestion of give-and-take negotiations with Iran is mocked, while alarmist propaganda, a ratcheting up of sanctions, and provocative actions like Wednesday’s assassination of yet another Iranian scientist push Americans closer to what seems like an inevitable bloodletting. 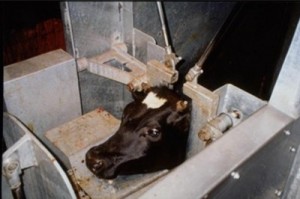 Even the New York Times now acknowledges that Israel, with some help from the United States, appears to be conducting a covert war of sabotage and assassination inside Iran. “The campaign, which experts believe is being carried out mainly by Israel, apparently claimed its latest victim on Wednesday when a bomb killed a 32-year-old nuclear scientist in Tehran’s morning rush hour,” Times reporter Scott Shane wrote in Thursday’s editions.

Though U.S. officials emphatically denied any role in the murder, Israeli officials did little to discourage rumors of an Israeli hand in the bombing. Some even expressed approval. Brig. Gen. Yoav Mordechai said he didn’t know who killed the scientist but added: “I am definitely not shedding a tear.”

The latest victim, Mostafa Ahmadi Roshan, was the fifth scientist associated with Iran’s nuclear program to be killed in the past four years, with a sixth scientist narrowly escaping death in 2010, Fereydoon Abbasi, who is now head of Iran’s Atomic Energy Organization.

As might be expected, Iran has denounced the murders as acts of terrorism. They have been accompanied by cyber-attacks on Iranian centrifuges and an explosion at a missile facility late last year killing a senior general and 16 others.

While this campaign has slowed Iran’s nuclear progress, it also appears to have hardened its resolve to continue work on a nuclear capability, which Iran says is for peaceful purposes only. Iranian authorities also have responded to tightening economic sanctions from Europe and the United States with threats of their own, such as warnings about closing the oil routes through the Strait of Hormuz and thus damaging the West’s economies.

Another front in Israel’s cold war against Iran appears to be the propaganda war being fought inside the United States, where the still-influential neoconservatives are deploying their extensive political and media resources to shut off possible routes toward a peaceful settlement, while building support for future military strikes against Iran.

Fitting with that propaganda strategy, the Washington Post’s editorial page, which is essentially the neocons’ media flagship, published a lead editorial on Wednesday urging harsher and harsher sanctions against Iran and ridiculing anyone who favored reduced tensions.

Noting Iran’s announcement that it had opened a better-protected uranium enrichment plant near Qom, the Post wrote: “In short, the new Fordow operation crosses another important line in Iran’s advance toward a nuclear weapons capability.

“Was it a red line for Israel or the United States? Apparently not, for the Obama administration at least. In a television interview Sunday, Defense Secretary Leon Panetta said: ‘Our red line to Iran is: do not develop a nuclear weapon.’ He asserted that Tehran was not trying to develop a weapon now, only ‘a nuclear capability.’ The Revolutionary Guard, which controls the nuclear program, might well take that as a green light for the new enrichment operation.”

While portraying Panetta as an Iranian tool, the Post suggested that anyone who wanted to turn back from an Iran confrontation was an Iranian useful fool. The Post wrote:

“The recent flurry of Iranian threats has had the intended effect of prompting a new chorus of demands in Washington that the United States and its allies stop tightening sanctions and instead make another attempt at ‘engagement’ with the regime. The Ahmadinejad government itself reportedly has proposed new negotiations, and Turkey has stepped forward as a host.

“Almost certainly, any talks will reveal that Iran is unwilling to stop its nuclear activities or even to make significant concessions. But they may serve to stop or greatly delay a European oil embargo or the implementation of sanctions on the [Iranian] central bank, and buy time for the Fordow centrifuges to do their work.”

The Post’s recommended instead “that every effort must be made to intensify sanctions” and to stop Iranian sale of oil anywhere in the world. In other words, continue to ratchet up the tensions and cut off hopes for genuine negotiations.

The escalating neocon demands for an ever-harder U.S. line against Iran — and Israel’s apparent campaign of killings and sabotage inside Iran — come at a time when President Barack Obama and some of his inner circle appear to be looking again for ways to defuse tensions. But the Post’s editorial and similar neocon propaganda have made clear that any move toward reconciliation will come with a high political price tag.

Already, a recurring Republican talking point is that Obama’s earlier efforts to open channels of negotiation with Iran and other foreign adversaries proved his naivete and amounted to “apologizing” for America. Obama also has faced resistance within his own administration, especially from neocon-lites such as Secretary of State Hillary Clinton.

For instance, in spring 2010, a promising effort led by Turkish Prime Minister Recep Tayyip Erdogan and Brazil’s then-President Luiz InÃ¡cio Lula da Silva got Iran’s President Mahmoud Ahmadinejad to agree to relinquish Iranian control of nearly half the country’s supply of low-enriched uranium in exchange for isotopes for medical research.

The Turkish-Brazilian initiative revived a plan first advanced by Obama in 2009 and the effort had the President’s private encouragement. But after Ahmadinejad accepted the deal, Secretary Clinton and other U.S. hardliners switched into overdrive to kill the swap and insist instead on imposing harsher sanctions against Iran.

At the time, Clinton’s position was endorsed by editors at the Washington Post and the New York Times, who mocked Erdogan and Lula da Silva as inept understudies on the international stage. If anything, the Post and Times argued, the United States should take an even more belligerent approach toward Iran, i.e. seeking “regime change.” [See Consortiumnews.com’s “WPost, NYT Show Tough-Guy Swagger.”]

As Clinton undercut the uranium swap and pushed instead for a new round of United Nations’ sanctions, Lula da Silva released a private letter from Obama who had urged the Brazilians to press forward with the swap arrangement. However, with Washington’s political momentum favoring another confrontation with a Muslim adversary, Obama retreated and lined up behind the sanctions.

Over the next nearly two years, the sanctions have failed to stop Iran’s work on enriched uranium which it claims is needed for medical research. Israel, the neocons and other American hardliners have responded by demanding still more draconian sanctions, while promoting anti-Iran propaganda inside the United States and winking at the murder of Iranian scientists inside Iran.

In this U.S. election year, Israel and the neocons may understand that their political leverage on Obama is at its apex. So, if he again searches for openings to negotiate with Iran, he can expect the same kind of nasty disdain that the Washington Post heaped on Panetta on Wednesday.

Israeli Prime Minister Benjamin Netanyahu and other Likud leaders appear to fear a second Obama term when he’d be freed from the need to seek reelection much as their predecessors feared a second term for President Jimmy Carter in 1980. Then, Prime Minister Menachem Begin thought that Carter in a second term would team up with Egyptian President Anwar Sadat in forcing Israel to accept a Palestinian state.

Begin’s alarm about that prospect was described by Israeli intelligence and foreign affairs official David Kimche in his 1991 book, The Last Option. Kimche wrote that Begin’s government believed that Carter was overly sympathetic to the Palestinians.

“Begin was being set up for diplomatic slaughter by the master butchers in Washington,” Kimche wrote. “They had, moreover, the apparent blessing of the two presidents, Carter and Sadat, for this bizarre and clumsy attempt at collusion designed to force Israel to abandon her refusal to withdraw from territories occupied in 1967, including Jerusalem, and to agree to the establishment of a Palestinian state.”

Extensive evidence now exists that Begin’s preference for Ronald Reagan led Israelis to join in a covert operation with Republicans to contact Iranian leaders behind Carter’s back and delay release of the 52 American hostages then being held in Iran until after Reagan defeated Carter in November 1980. [For details, see Robert Parry’s Secrecy & Privilege or Consortiumnews.com’s “The Back Story on Iran’s Clashes.”]

Today, Obama’s relationship with Netanyahu seems as strained as Carter’s relationship with Begin was three decades ago. And already many American neocons have signed up with Obama’s Republican rivals, including with GOP frontrunner Mitt Romney whose foreign policy white paper was written by prominent neocons.

So the question now is: Will the President of the United States take his place amid the herd of cattle getting steered into the slaughterhouse of another war?

← The Enduring Shame of Guantanamo
America, a Land Made for the 1 Percent →

46 comments for “Herding Americans to War with Iran”