Exclusive: Anyone still doubting that the Washington Post is the media flagship for neoconservatism should reflect on Saturday’s editorial in which the Post criticizes Republican presidential hopeful Mitt Romney for saying U.S. troops should be pulled out of Afghanistan “as soon as we possibly can,” writes Robert Parry.

Republican presidential hopeful Mitt Romney has proclaimed a set of foreign policy goals that reprise the neoconservative agenda of the Project for the New American Century, but the Washington Post’s neocon editors still chide him for not being hawkish enough.

On Saturday, the Post editorial, “Mitt Romney’s Foreign Policy Failings,” notes that Romney suggested on the campaign trail that “U.S. troops in Afghanistan should be withdrawn ‘as soon as we possibly can’ and that the war showed that Americans ‘cannot fight another nation’s war of independence.’” 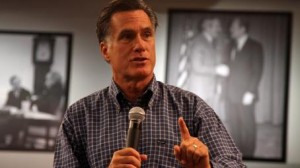 The Post cites those comments as raising concerns that Romney “might be positioning himself to the left of President Obama.”

Poor Romney. Here’s a guy who assembled a team of neocon retreads to write his foreign policy white paper, “An American Century.” He allowed the title to be an obvious homage to the neocon Project for the New American Century, which in the 1990s built the ideological framework for the disastrous Iraq War and other “regime change” strategies of President George W. Bush.

Romney even recruited Eliot Cohen, a founding member of the Project for the New American Century and a protÃ©gÃ© of prominent neocons Paul Wolfowitz and Richard Perle, to write the foreword. And Romney still can’t get the neocon editors of the Washington Post to overlook his suggestion that the Afghan War shouldn’t be endless.

However, perhaps the Post just wants to make sure that Romney doesn’t deviate even slightly from the course marked out by his neocon advisers. After all, Romney’s white paper chastises Barack Obama for committing himself to pulling out the 30,000 “surge troops” from Afghanistan by mid-2012 and conducting a gradual withdrawal of the remaining 70,000 by the end of 2014.

Instead, Romney’s white paper argues that Obama should have followed the advice of field commanders like then-Gen. David Petraeus and made withdrawals either more slowly or contingent on American military success. The white paper also opposes a full withdrawal from Iraq, or even an Obama administration plan to leave only 3,000 or so “trainers.”

More broadly — and the Washington Post’s editors should like this — Romney’s white paper makes clear that if he wins the White House, he is determined to reconstruct pretty much all of Bush’s foreign policy, complete with a renewed insistence on U.S. military dominance of the world and a full restoration of neocon influence in Washington.

Romney’s “An American Century” also brings back a favorite tactic of the Bush years, the baiting of Americans who dare criticize the nation’s hubristic foreign policy of the last decade. Echoing a favorite Republican talking point, Romney scolds Obama for supposedly “apologizing” for America.

The white paper states: “In his first year in office alone, President Obama issued apologies for America in speeches delivered in France, England, Turkey, and Egypt not to mention on multiple similar occasions here at home.

“Among the ‘sins’ for which he has repented in our collective name are American arrogance, dismissiveness, and derision; for dictating solutions, for acting unilaterally, for acting without regard for others; for treating other countries as mere proxies, for unjustly interfering in the internal affairs of other nations, for committing torture, for fueling anti-Islamic sentiments, for dragging our feet in combating global warming, and for selectively promoting democracy.

“The sum total of President Obama’s rhetorical efforts has been a form of unilateral disarmament in the diplomatic and moral sphere. A President who is so troubled by America’s past cannot lead us into the future.”

In other words, Romney’s neocons are reaffirming their long-held pattern of demonizing anyone who tries to discuss U.S. foreign policy honestly. After all, the neocons of the Bush years were guilty of pretty much every “sin” that is cited above. Apparently, it’s disqualifying to tell the truth.

Romney also attacks Obama for even modestly trimming the U.S. military budget which now is roughly equal to what is spent by all other nations on the planet combined.

According to “An American Century,” Romney “will put our Navy on the path to increase its shipbuilding rate from nine per year to approximately fifteen per year. He will also modernize and replace the aging inventories of the Air Force, Army, and Marines, and selectively strengthen our force structure.

“And he will fully commit to a robust, multi-layered national ballistic-missile defense system to deter and defend against nuclear attacks on our homeland and our allies.’

The white paper does make one concession to reality by conceding that “this will not be a cost-free process. We cannot rebuild our military strength without paying for it.” The white paper adds:

“Romney will begin by reversing Obama-era defense cuts and return to the budget baseline established by Secretary Robert Gates in 2010, with the goal of setting core defense spending, meaning funds devoted to the fundamental military components of personnel, operations and maintenance, procurement, and research and development, at a floor of 4 percent of GDP,” or about $565 billion.

Typical of a neocon-written white paper, there is also the obligatory declaration that the United States must do whatever is necessary to protect Israel’s interests. It states:

“Indeed, this is an especially dangerous moment for the Jewish state. It has deteriorating relationships with Turkey and Egypt. It faces longstanding dangers from Hamas in Gaza, Hezbollah in Lebanon, a violent and highly unstable Syria, and a nuclear-aspiring Iran whose leadership is openly calling for Israel’s annihilation.

“To ensure Israel’s security, Mitt Romney will work closely with Israel to maintain it strategic military edge. The United States must forcefully resist the emergence of anti-Israel policies in Turkey and Egypt, and work to make clear that their interests are not served by isolating Israel.

“With regard to the Israeli-Palestinian conflict, Romney’s policy will differ sharply from President Obama’s.   President Obama for too long has been in the grip of several illusions. One is that the Israeli-Palestinian dispute is the central problem in the region [which has] led the administration to believe that distancing the United States from Israel was a smart move that would earn us credits in the Arab world and somehow bring peace closer.

“The record proves otherwise. The key to negotiating a lasting peace is an Israel that knows it will be secure.

“The United States needs a president who will not be a fair-weather friend of Israel. The United States must work as a country to resist the worldwide campaign to delegitimize Israel. We must fight against that campaign in every forum and label it the anti-Semitic poison that it is. Israel’s existence as a Jewish state is not up for debate.”

As for Iran, the country at the top of Israel’s current enemies list, Romney vows to ratchet up military pressure by deploying aircraft carrier attack groups to the region and standing shoulder to shoulder with Israel, which has repeatedly threatened to bomb Iran’s nuclear facilities despite Iran’s continued insistence that it has no nuclear-weapons ambition.

“The United States should repair relations with Israel, increase military coordination and assistance, and enhance intelligence sharing to ensure that our allied capabilities are robust and ready to deal with Iran,” Romney’s white paper says.

Romney also suggests an expansion of legal authority for U.S. officials conducting the “war on terror.” His white paper says: “As president, Mitt Romney will empower all relevant military, intelligence, and homeland security agencies with the appropriate legal authority and policy guidance to dismantle terrorist groups and prevent terrorist attacks on our homeland and on targets abroad.”

Those broader legal authorities would take aim at what Romney calls “an emerging threat to the homeland [from] the radicalization of U.S. citizens and residents leading to ‘homegrown’ Islamist terrorism.

“Our counterterrorism professionals will need to continue to develop ‘fusion centers’ and other innovative systems to collect and systematically analyze information about domestic activities. They will need the capacity, consistent with U.S. law, to collect and unflinchingly analyze communications between terrorist networks abroad and people within our borders.”

It’s always hard to know what neocons mean when they say “consistent with U.S. law,” since they devised the Bush administration’s doctrine of unlimited presidential powers, but the word “unflinchingly” suggests that they envision a robust domestic spying program.

Despite Romney compiling what amounts to a neocon wish list, the Washington Post’s editors still suggest that Romney’s foreign policy has “failings,” such as his comment that U.S. forces might not stay in Afghanistan forever.

But perhaps Romney shouldn’t feel so bad about the Post’s criticism. The newspaper was even tougher on one of his rivals, former Utah Gov. Jon Huntsman, a past ambassador to China. The Post dismisses him as “decidedly more misguided” than Romney.

Huntsman is taken to task for “his promise to ‘bring home’ U.S. troops so as to rebuild an American ‘core’ he views as ‘broken.’”

The Post says that “sounds like an updated version of George McGovern’s ‘Come Home America’ campaign of 1972. Americans didn’t buy it then; it would be surprising if GOP primary voters lined up for it now.”

← The Tale of Two Assassination Plots
Temptations of Greed and Empire →

13 comments for “Is Mitt Romney a Neocon Purist?”