With the dedication of the Martin Luther King Jr. memorial, a question before Americans is how the late civil rights leader would have responded to the nation’s recent decades of greed, war and decline. Rev. Howard Bess poses the same question as to how ancient Israelites reacted to hostile empires and to their own.

According to the history of Israel found in the Bible, Israelites spent a lot of time in lands ruled by other people and some time ruling others. What’s less clear is what they and the rest of mankind, including Americans today, learned from those experiences.

When Father Abraham left the land between the two great rivers, the Tigris and the Euphrates, the Bible tells us that he did not know where he was going. All Abraham knew was that his God told him to go. 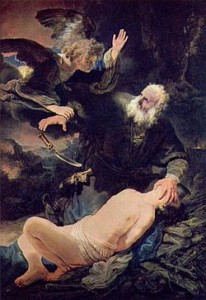 Abraham as depicted by Rembrandt

He and his clan were nomads and had no homeland. For the sake of survival and safety, Abraham’s grandson, Israel, took the clan to Egypt. It was the Israelites’ first great experience of being a small minority in a powerful empire nation.

They survived as abused slaves by refusing to assimilate. Against all odds they refused to surrender their unique identity, their traditions or their God. Eventually, they escaped under the leadership of Moses.

The next chapters in the life of Israel are a classic story of the abused becoming the abuser. The Bible dresses up the story with the endorsement and empowerment from their God, Jehovah. The Bible says that God gave Palestine to the Israelites. History says the Israelites took Palestine by brutal force.

Indeed, when the stories are stripped to reality, Israel became a great and successful conqueror. The Israelites’ great King David was glorified because he killed people by the thousands men, women and children. The formula was simple: Assimilate and accept our God or die.

Under King David and King Solomon, a period known as the “golden age,” Israel became an empire nation, and the Israelites were no better at being an empire than the kings of Babylon or the Pharaohs of Egypt had been.

They enslaved those who did not assimilate and collected tribute from the clans that surrounded them. Israel enjoyed being an empire, but it did not last long. As any kid, who has played king of the hill, knows, it is just a matter of time until forces knock the king off the hill and a new bully takes his place.

The Syrians overran the northern tribes of Israel, and we have not heard from them since. Eventually the Babylonians devastated the southern tribes, killing many and assimilating many others. A number were taken back to Babylon as slaves.

Some of this surviving group of Israelites in Babylon were priests, who had been beholden to the empire ideal for Israel. But the empire was gone with no hope of restoration. Its devastation was complete.

This tiny remnant did two things. First they refused to assimilate. Their faith was too much a part of them to abandon their religious practices. Their goal was not to convert others but to maintain their own spiritual wellbeing.

As best they could, they maintained their rituals and kept their holy days. I suspect they understood how their forbearers had survived those years in Egypt.

Second, the Israelite remnant thought through the meaning of their faith as the people of God living their lives as slaves of a world empire. During the 70 years of their exile, they produced a burst of creative thinking and writing.

Large parts of the Old Testament were written during those years and much of Israelite tradition was rewritten and reinterpreted. The idea that the people of God are called to be a servant people rather than a ruling people was born during those years.

So, what is the lesson of the Babylonian exile for our own day?

We live in the American empire. American people are obsessed with maintaining our status as empire. We must be number one in everything. We must have the most powerful military ever known. We must be the economic center of the world. We believe our culture should be dominant in the world. A winning theme in national elections is keep America number one!

However, America’s thirst to be king of the hill cannot be reconciled with the Christian faith, as I understand it. The words of Jesus ring in my ears. If anyone would be great, let him be the servant of all.

Yet, Christians and Christian churches are being assimilated into the empire themes of power, wealth and dominance much as the ancient Israelites were during their “golden age” of empire and later when many were absorbed into the Babylonian empire.

Have devout Christians, trying to be faithful to the humble teachings of Jesus, found themselves a small remnant living within and tempted by the power of a modern-day empire?

However, rather than complaining about our plight, it is time to review what we believe: What does it mean to be a Christian in the 21st century? What are the commitments that a Christian should make while living in an empire headed in the wrong direction? Does the Rabbi Jesus from Nazareth have something to say about 21st century America?

Now is not a time for Christians simply to accommodate and assimilate. Our voices for peace and restorative justice need to be a part of every public discussion and forum to which we can gain access.

Christ’s priority concern for the poor, the sick and the widowed must be voiced. American addiction to war must be ended. Greed must be challenged. We know we live in a nation with values in serious conflict with our own. Silence is not acceptable.

When and how will America be knocked off the hill of dominance? The remnant of Israelites in Babylon left that up to God. In the meantime, today’s remnant of devout Christians within the American empire must keep healthy and vigorous in our witness.

← Is Mitt Romney a Neocon Purist?
US Uses Leaks to Hype Iran ‘Plot’ →