On President Obama’s second full day in office, he promised to close the Guantanamo Bay prison, but then encountered fierce resistance from Congress, leading to a humiliating retreat underscored now by the prison’s tenth anniversary — and by renewed worldwide condemnation, as Nat Parry reports.

When the Guantanamo prison camp, originally dubbed by the U.S. military Camp X-Ray, opened in January 2002, the United States came under international criticism that was nearly unprecedented in its intensity.

Some of the loudest complaints came from the staunchest U.S. ally, the United Kingdom, where three cabinet ministers Robin Cook, Patricia Hewitt and Jack Straw expressed concern that international agreements about the treatment of prisoners of war were being breached. The U.N. High Commissioner for Human Rights, Mary Robinson, also objected to the camp and called on President George W. Bush’s administration to follow the Geneva Conventions. 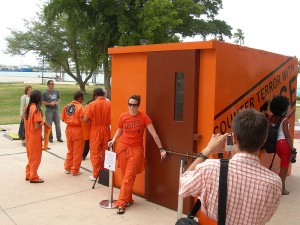 In a Jan. 19, 2002, column in the British Independent, Robinson argued that because the Afghanistan conflict was of an international nature, “the law of international armed conflict applies.” She took issue with the administration’s assertion that the prisoners were “unlawful combatants” and thus outside the protections of the Geneva Conventions.

European Union foreign policy chief Javier Solana said that despite the Sept. 11 atrocities,”changing our values and our way of life would be terrorism’s first victory.”

Amnesty International expressed concern about the tactics being used and the secrecy surrounding the camp. “Keeping prisoners incommunicado, sensory deprivation, the use of unnecessary restraint and the humiliation of people through tactics such as shaving them, are all classic techniques employed to ‘break’ the spirit of individuals ahead of interrogation,” the human rights group said.

The International Committee of the Red Cross — in an unusual deviation from its practice of not publicly criticizing detaining governments — said the United States might have violated Geneva Convention rules against making a spectacle of prisoners by distributing pictures of the detainees being subjected to sensory deprivation, which were published worldwide.

British human rights attorney Stephen Solley said the treatment of the suspects was “so far removed from human rights norms that it [was] difficult to comprehend.”

Seven years later, just two days into his administration, President Barack Obama’s announcement that he would close the Guantanamo camp was greeted with international praise equally intense. An Executive Order Obama signed on Jan. 22, 2009, seemed to unambiguously mandate the closure of Guantanamo within a year:

“The detention facilities at Guantanamo for individuals covered by this order shall be closed as soon as practicable, and no later than one year from the date of this order. If any individuals covered by this order remain in detention at Guantanamo at the time of closure of those detention facilities, they shall be returned to their home country, released, transferred to a third country, or transferred to another United States detention facility in a manner consistent with law and the national security and foreign policy interests of the United States.”

Michele Cercone, spokesperson for the European Union Justice and Home Affairs Commission, said at the time that the commission “has been very pleased that one of the first actions of Mr. Obama has been to turn the page on this sad episode of Guantanamo.”

UN High Commissioner for Human Rights Navi Pillay also praised Obama’s Executive Order, saying that it was a good day for the rule of law. “The fact that President Obama has placed such a high priority on closing Guantanamo and set in motion a system to safeguard the fundamental rights of the detainees there is extremely encouraging,” she stated.

“The United States has in the past been a staunch supporter of international human rights law, and this is one of the reasons that the regime that was established in Guantanamo has been viewed as so damaging,” the High Commissioner added.

Now at Guantanamo’s ten-year anniversary and nearly three years after President Obama’s Executive Order there is a palpable sense of disappointment and betrayal from the human rights community. The United States is finding itself on the receiving end of now-familiar criticism of its indefinite detention policies, with human rights organizations and intergovernmental bodies renewing their complaints that for the past ten years, the U.S. has flouted international human rights standards in its practices at the notorious prison camp.

“Human Rights Watch opposes the prolonged indefinite detention without trial of terrorism suspects at Guantanamo Bay and elsewhere,” said HRW in a statement on Jan. 6. The group reminded the U.S. of its obligations to prosecute terrorist suspects and to compensate detainees who have been wrongly imprisoned and mistreated over the past decade:

“The practice [of indefinite detention] violates U.S. obligations under international law. Human Rights Watch has strongly urged the U.S. government to either promptly prosecute the remaining Guantanamo detainees according to international fair trial standards, or safely repatriate them to home or third countries.

“We have also called for investigations of U.S. officials implicated in torture of terrorism suspects and for adequate compensation for detainees who were mistreated. Human Rights Watch will continue to press for compliance with these obligations. Failure to do so does enormous damage to the rule of law both in the US and abroad.”

On the eve of Guantanamo’s tenth anniversary, Amnesty International said, “Guantanamo has politicized justice internationally by portraying detainees as having no human rights.” Amnesty has described the legacy of the Guantanamo Bay prison as a “decade of damage to human rights” not only in the United States, but across the world.

“The USA speaks the language of human rights fluently on the global stage, but stumbles when it comes to applying human rights standards to itself. The Bush administration promised to put human rights at the centre of its counter-terrorism strategy, but singularly failed to do so. The Obama administration has promised the same thing, but the USA continues to fall short of this commitment, despite what were undoubtedly positive initial steps in the right direction.”

“From day one,” said Amnesty, “the USA failed to recognize the applicability of human rights law to the Guantanamo detentions.”

Ambassador Janez Lenarcic, the Director of the Organization for Security and Cooperation in Europe’s Office for Democratic Institutions and Human Rights (ODIHR), also expressed dismay over the failure to close the Guantanamo facility.

“Universal human rights standards require that the detention of terrorist suspects shall be accompanied by concrete charges and the persons detained under these charges shall be immediately informed of them and brought before a competent judicial authority,” Lenarcic said.

In a press release, ODIHR reminded the United States of its OSCE obligations:

“As a participating State of the OSCE, the United States has committed itself to respect human rights in the fight against terrorism and to ensure the right to a fair trial within a reasonable time before an independent and impartial tribunal. In the OSCE Bucharest Document of 2001, participating States expressed their determination to protect their citizens from security challenges such as terrorism ‘while safeguarding the rule of law, individual liberties, and the right to equal justice under law.’”

Lenarcic regretted that the practice of indefinite detention without trial has been codified into U.S. law with the recent adoption of the 2012 National Defense Authorization Act (NDAA). He called for a swift closure of the Guantanamo detention center and urged the authorities to prosecute promptly the remaining Guantanamo detainees in accordance with international fair trial standards, or release them.

Moazzam Begg, a 43-year-old British Muslim who was wrongly detained at Guantanamo for three years two of them in solitary confinement until British authorities negotiated his release in January 2005, is more despondent about the prospects of closing the prison camp.

“Gitmo will never close. That is a fantasy,” Begg recently told CNN. “I’ve stopped wishing for it. Even if it closes its doors, it will be only symbolic. The detainees who are still there will go somewhere else to be held and be treated possibly worse, and still not get their time in court. And Gitmo, in a way, will always be open. It will be in my memory, in my head, just like everyone else who experienced that hell.”

Colonel Morris Davis, a chief prosecutor at Guantanamo Bay during the Bush administration, concurs with Moazzam Begg, saying that Obama “doesn’t have the balls” to close Guantanamo.

10 comments for “The Enduring Shame of Guantanamo”