Over the past three decades, right-wing policies have diverted the wealth of America into fewer and fewer hands, and a right-wing Supreme Court has let money dominate U.S. politics like never before, challenging Woody Guthrie’s idea that “this land was made for you and me,” Bill Moyers and Michael Winship note.

The traveling medicine show known as the race for the Republican presidential nomination has moved on from Iowa and New Hampshire, and all eyes are now on South Carolina.

Well, not exactly all. At the moment, our eyes are fixed on some big news from the great state of Oklahoma, home of the legendary American folk singer Woody Guthrie, whose 100th birthday will be celebrated later this year. 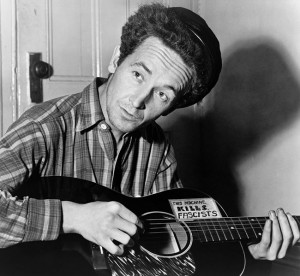 Woody saw the ravages of the Dust Bowl and the Depression firsthand; his own family came unraveled in the worst hard times. And he wrote tough yet lyrical stories about the men and women who struggled to survive, enduring the indignity of living life at the bone, with nothing to eat and no place to sleep.

He traveled from town to town, hitchhiking and stealing rides in railroad boxcars, singing his songs for spare change or a ham sandwich. What professional success he had during his own lifetime, singing in concerts and on the radio, was often undone by politics and the restless urge to keep moving on. “So long, it’s been good to know you,” he sang, and off he would go.

What he wrote and sang about caused the oil potentates and preachers who ran Oklahoma to consider him radical and disreputable. For many years he was the state’s prodigal son, but times change, and that’s the big news.

Woody Guthrie has been rediscovered, even though Oklahoma’s more conservative than ever — one of the reddest of our red states with a governor who’s a favorite of the Tea Party. The George Kaiser Family Foundation has bought Guthrie’s archives — his manuscripts, letters and journals. A center is being built in Tulsa that will make them available to scholars and visitors from all over the world.

Among its treasures is the original, handwritten copy of this song, Woody Guthrie’s most famous — “This Land Is Your Land.” The song extols the beauty of the country Guthrie traveled across again and again; its endless skyways and golden valleys, the sparkling sands of her diamond deserts.

Yet his eye was clear, unclouded, and unobstructed by sentimentality, for he also wrote in its lyrics:

In the shadow of the steeple I saw my people,

By the relief office I seen my people;
As they stood there hungry, I stood there asking
Is this land made for you and me?

“Is this land made for you and me?” A mighty good question. The biggest domestic story of our time is the collapse of the middle class, a sharp increase in the poor, and the huge transfer of wealth to the already rich.

In an era of gross inequality there’s both irony and relevance in Woody Guthrie’s song. That “ribbon of highway” he made famous? It’s faded and fraying in disrepair, the nation’s infrastructure of roads and bridges, once one of our glories, now a shambles because fixing them would require spending money, raising taxes, and pulling together.

This land is mostly owned not by you and me but by the winner-take-all super-rich who have bought up open spaces, built mega-mansions, turned vast acres into private vistas, and distanced themselves as far as they can from the common lot of working people the people Woody wrote and sang about.

True, Barack Obama asked Bruce Springsteen and Woody Guthrie’s longtime friend Pete Seeger to sing “This Land is Your Land” at that big, pre-inaugural concert the Sunday before he was sworn in. And sing they did, in the spirit of hope and change that President Obama had spun as the heart of his campaign rhetoric.

Today, whatever was real about that spirit has been bludgeoned by severe economic hardship for everyday Americans and by the cynical expedience of politicians  who wear the red-white-and-blue in their lapels and sing “America the Beautiful” while serving the interests of  crony capitalists stuffing SuperPACs with millions of dollars harvested from the gross inequality destroying us from within.

But maybe — just maybe — the news that Woody Guthrie, once a pariah in his home state, has become a local hero is the harbinger of things to come, and that all the people who still believe this land is our land will begin to take it back.

7 comments for “America, a Land Made for the 1 Percent”