Because Russia and Iran are both viewed as enemies of Washington, Western news media often feel comfortable publishing any old claim about them as fact regardless of sourcing or evidence. 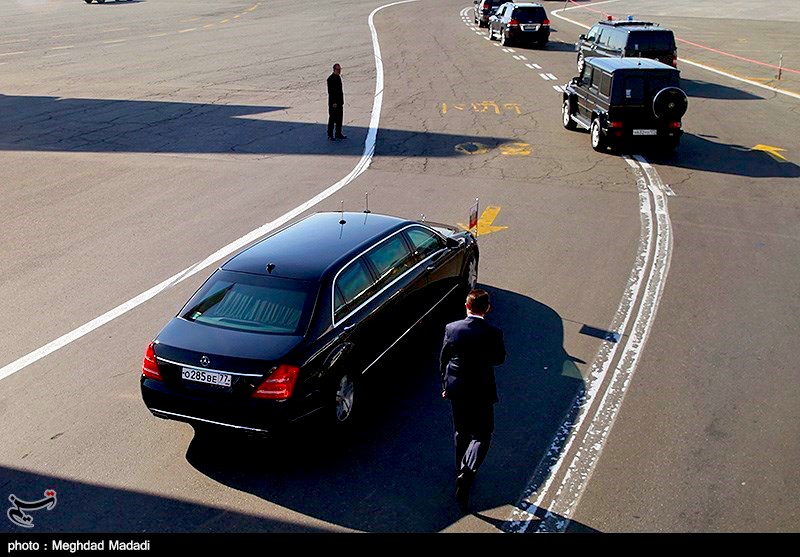 Two false news reports went viral this week due to sloppy sourcing and journalistic malpractice. As usual they both featured bogus claims about U.S.-targeted nations, in this case Russia and Iran.

An article in Responsible Statecraft titled “How a lightly-sourced AP story almost set off World War III” details how the propaganda multiplier news agency published a one-source, one-sentence report claiming that Russia had launched a deadly missile strike at NATO member Poland, despite evidence having already come to light by that point that the missile had probably come from Ukraine. This set off calls for the implementation of a NATO Article 5 response, meaning hot warfare between NATO and Russia in retaliation for a Russian attack on one of the alliance members.

A lot of people spent yesterday calling for war between the world’s two largest nuclear powers. I dug into how one poorly sourced story made that happen in my latest for @RStatecraft https://t.co/yH5nRwuVnS

Mainstream news reports circulated the narrative that Poland had been struck by a “Russian-made” missile, which is at best a highly misleading framing of the fact that the inadvertent strike came from a Soviet-era surface-to-air missile system still used by Ukraine, a former Soviet state.

Headlines from the largest and most influential U.S. news outlets including The New York Times, CNN and NBC all repeated the misleading “Russian-made” framing, as did AP’s own correction to its false report that Poland was struck by Russia.

All current evidence indicates that Poland was accidentally hit by one of those missiles while Ukraine was defending itself from Russian missile strikes.

President Joe Biden has said it’s “unlikely” that the missile which killed two Poles came from Russia, while Polish President Andrzej Duda and NATO Secretary General Jens Stoltenberg both said it looks like it was an accidental strike from Ukrainian air defenses. Russia says its own missile strikes have been no closer than 35 km from the Polish border.

The only party still adamantly insisting that the strike did come from Russia is Ukraine, leading an exasperated diplomat from a NATO country to anonymously tell Financial Times:  “This is getting ridiculous. The Ukrainians are destroying [our] confidence in them. Nobody is blaming Ukraine and they are openly lying. This is more destructive than the missile.”

It is very sleazy for AP to continue to protect the anonymity of the U.S. official who fed them a lie of such immense significance and potential consequence. They should tell the world who it was who initiated that lie so we can demand explanations and accountability.

Another false story that went extremely viral was one that Newsweek has been forced to extensively revise and correct that was initially titled “Iran Votes to Execute Protesters, Says Rebels Need ‘Hard Lesson’,” but is now titled “Iran Parliament Chants ‘Death to Seditionists’ in Protest Punishment Call.” The latest correction notice now reads,

“This article and headline were updated to remove the reference to the Iranian Parliament voting for death sentences. A majority of the parliament supported a letter to the judiciary calling for harsh punishments of protesters, which could include the death penalty.” 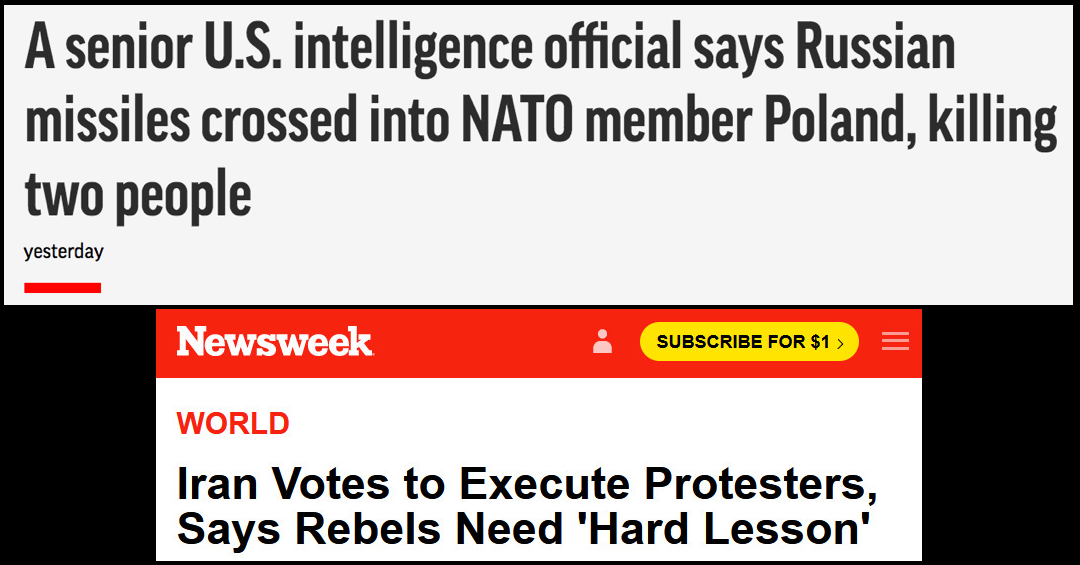 Moon of Alabama explains how the Newsweek piece was the springboard that launched the viral false claim that the Iranian government had just sentenced 15,000 protesters to death, which was circulated by countless politicians, pundits and celebrities throughout social media. This claim has been debunked by mainstream outlets such as NBC News, which explains that “There has been no evidence that 15,000 protesters have been sentenced to death. Two protesters had been sentenced to death as of Tuesday, although they can appeal, according to state news agencies.”

This claim was mindlessly shared by more mainstream commentators, political leaders (including @JustinTrudeau and @tedlieu), "journalists" and activists than one could count. It went mega-viral.

Just basic skepticism would've revealed it had no credible sourcing from the start: https://t.co/Es1ODHQhWh

An article by The Cradle, “Fact check – Iran has not sentenced ‘15,000’ protesters to death,” explains that the Iranian parliament actually just signed a letter urging the Iranian judiciary to issue harsher sentences upon protesters who’ve been demonstrating against Tehran. Those sentences can include the death penalty as noted above, but up to this point have more often entailed prison sentences of five-to-10 years.

The Cradle also notes that even the “15,000” figure is suspect, as its sole source is an American organization funded by the U.S. government’s National Endowment for Democracy:

US-based HRANA is the media arm of the Human Rights Activists in Iran (HRAI), a group that receives funding from the National Endowment for Democracy (NED) – a CIA soft power front that has for decades funded regime-change efforts across the globe.”

Indeed, it’s public knowledge that NED is funded directly by the U.S. government, and that according to its own cofounder was set up to do overtly what the C.I.A. used to do covertly. It’s possible that the 15,000 figure could be more or less accurate, and it’s possible that a great many more Iranian protesters will be sentenced to death for their actions, but reporting such possibilities as a currently established fact is plainly journalistic malpractice.

In April, Newsweek published an article titled “Russians Raped 11-Year-Old Boy, Forced Mom to Watch: Ukraine Official.” In May, Newsweek published an article titled “Ukraine Official Fired Over Handling of Russian Sexual Assault Claims.” It was the same official. Newsweek made no mention of the fact that its source for its sexual assault story had just been fired for disseminating unevidenced claims about sexual assault. To this day its April report contains no updates or corrections.

Contrast this complete dereliction of journalistic responsibility with Newsweek’s extreme caution when one of its reporters tried to report on the Organisation for the Prohibition of Chemical Weapons, or OPCW, scandal which disrupted the U.S. government narrative about an alleged chemical weapons attack by the Syrian government. Reporter Tareq Haddad was forbidden by his superiors to write about the many leaks coming out exposing malfeasance in the Douma investigation by the Organisation for the Prohibition of Chemical Weapons, on the basis that NED-funded Bellingcat had disputed the leaks and that other respectable outlets had not reported on them.

Fairness and Accuracy in Reporting has published numerous articles documenting what Adam Johnson calls the North Korea Law of Journalism, which holds that “editorial standards are inversely proportional to a country’s enemy status.” In other words, the more unfavorably a foreign government is viewed by the U.S. empire, the lower the editorial standards for reporting claims about them. Because Russia and Iran are both viewed as enemies of Washington, Western news media often feel comfortable just publishing any old claim about them as fact regardless of sourcing or evidence.

We saw this highlighted during the insanity of Russiagate, where mainstream news outlet after mainstream news outlet was caught publishing unevidenced conspiratorial hogwash that it was often (though not even always) forced to retract. This was possible because when it comes to implicating Russia the evidentiary standards for reporting are much lower than they would be for implicating a government that is held in favor by the U.S.

And this is the case because the Western mainstream media are the propaganda services of the U.S.-centralized empire. They do not exist to tell people the truth, they exist to manipulate the public into hating the official enemies of the empire and into consenting to foreign-policy agendas that they would not otherwise consent to.