This is not just brazen journalistic malpractice, this is actual atrocity propaganda. 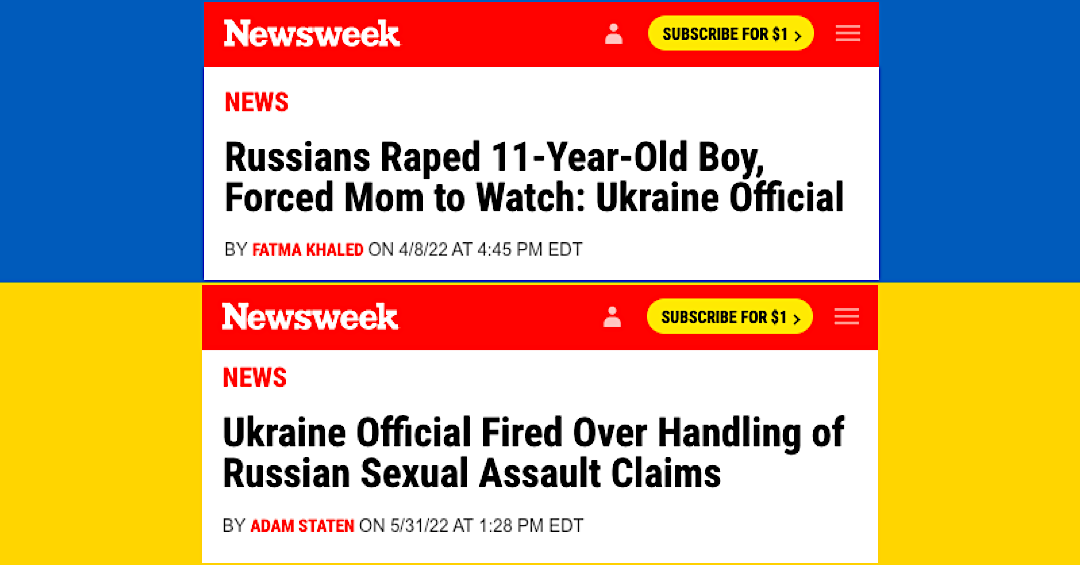 A Ukrainian government official frequently cited as a source by western news media for her allegations of atrocities committed by Russian troops has been fired by the Ukrainian parliament, in part because of the unevidenced nature of those claims.

“A Ukrainian official has been relieved of her duties over her handling of reports detailing sexual assault allegations made against Russians in Ukraine.

On Tuesday, the Ukrainian parliament, the Verkhovna Rada of Ukraine, removed Lyudmila Denisova, the parliament’s commissioner for human rights, from her post, according to Ukrainska Pravda. No new appointment has been made to fill the role.

The move to dismiss Denisova came after outrage about the wording used in public reports about alleged sexual assaults committed by Russians, as well as the alleged dissemination in those reports of unverified information. Despite accusations from Ukraine, the Kremlin has repeatedly denied that Russian soldiers have committed war crimes or sexual assaults during the invasion.”

As it happens, Newsweek is one of the many western outlets who have uncritically cited Denisova’s unevidenced claims in their reporting of events in Ukraine. She was the “Ukraine official” in Newsweek’s incendiary April headline “Russians Raped 11-Year-Old Boy, Forced Mom to Watch: Ukraine Official,” an article whose entire first half featured unevidenced claims by Denisova.

A Ukrainian official has been relieved of her duties over her handling of reports detailing sexual assault allegations made against Russians in Ukraine.

Denisova’s name featured just the other day in my own critique of the western media’s blind-faith regurgitation of Ukrainian government assertions when multiple western media outlets parroted her unevidenced claims about two Russians raping a one year-old baby to death.

Business Insider, The Daily Beast, The Daily Mail, The Sun, Metro, The Daily Mirror and Yahoo News all published reports on the same story, and the one and only source for all of them was a post made by Denisova on a Ukrainian government website which contained no evidence and concluded with a call for more weapons and sanctions against Russia from the western world.

"The latest story making the rounds is a completely unevidenced claim made by a Ukrainian government official that Russians are going around raping Ukrainian babies to death."https://t.co/tuYauL2Hol

Moon of Alabama has compiled other western news media reports which have been uncritically regurgitating claims made by Denisova and disguising those claims as news stories, like Business Insider’s “Ukraine says it received more than 400 reports of sexual violence, including rape, by Russian soldiers within 2 weeks” and Time’s “Ukrainians Are Speaking Up About Rape as a War Crime to Ensure the World Holds Russia Accountable.”