You can be sure that these obscene, unverified charges against Russian forces won’t attract the social-media censors who are supposedly rooting out “disinformation.” 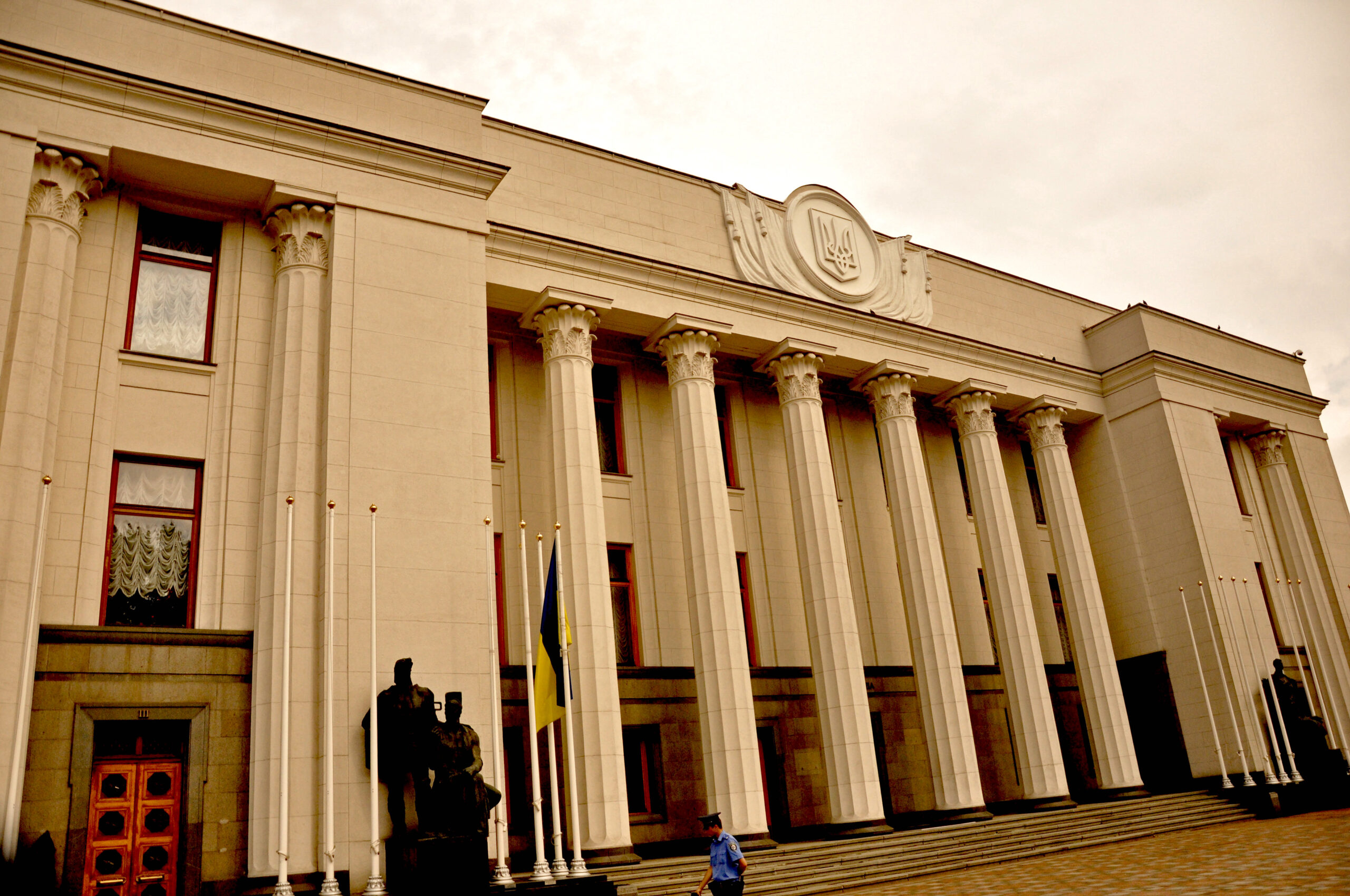 The Ukrainian government is quickly learning that it can say anything, literally anything at all, about what’s happening on the ground there and get it uncritically reported as an actual news story by the mainstream Western press.

The latest story making the rounds is a completely un-evidenced claim made by a Ukrainian government official that Russians are going around raping Ukrainian babies to death. Business Insider, The Daily Beast, The Daily Mail and Yahoo News have all run this story despite no actual evidence existing for it beyond the empty assertions of a government with every incentive to lie.

“A 1-year-old boy died after being raped by two Russian soldiers, the Ukrainian Parliament’s Commissioner for Human Rights said on Thursday,” reads a report by Business Insider which was subsequently picked up by Yahoo! News. “The accusation is one of the most horrific from Russia’s invasion of Ukraine, but is not unique.”

At the end of the fourth paragraph, we get to the disclaimer that every critical thinker should look for when reading such stories in the mainstream press:

“Insider could find no independent evidence for the claim.”

A growing number of accusations that Russian soldiers are raping the youngest and most vulnerable war victims is the latest disturbing twist in a modern war defined by archaic brutalityhttps://t.co/fFFkGLmg7M

In its trademark style, The Daily Beast ran the same story in a much more flamboyant and click-friendly fashion:

“The dead boy is among dozens of alleged child rape victims which include two 10-year-old boys, triplets aged 9, a 2-year-old girl raped by two Russian soldiers, and a 9-month-old baby who was penetrated with a candlestick in front of its mother, according to Ukraine’s Commissioner for Human Rights.”

The one-and-only source for this latest spate of “the Russians are raping babies to death” stories is a statement on a Ukrainian government website by Ukraine’s Human Rights Commissioner Lyudmyla Denisova. The brief statement contains no evidence of any kind, and its English translation concludes as follows:

“I appeal to the U.N. Commission for Investigation Human Rights Violations during the Russian military invasion of Ukraine to take into account these facts of genocide of the Ukrainian people.”

I call on our partners around the world to increase sanctions pressure on russia, to provide Ukraine with offensive weapons, to join the investigation of rashist crimes in our country!

The enemy must be stopped and all those involved in the atrocities in Ukraine must be brought to justice!”

This is what passes for journalism in the Western world today. Reporting completely unfounded allegations against U.S. enemies based solely on assertions by a government official demanding more weapons and sanctions against those enemies and making claims that sound like they came from an “It’s Always Sunny in Philadelphia” bit.

The Ukrainian government is quickly learning that it can say anything, literally anything about Russia, without any evidence at all, and the western mainstream press will report it as an actual news story. pic.twitter.com/BYESIPwe1x

We cannot say definitively that these rapes never happened. Nor can we say definitively that the Australian government isn’t warehousing extraterrestrial aircraft in an underground bunker in Canberra. But we don’t treat that like it’s an established fact and publish mainstream news reports about it just because we can’t prove it’s false. That’s not how the burden of proof works.

Obviously, the rape of children is a very real and very serious matter, and obviously rape is one of the many horrors which can be inflicted upon people in the lawless environment of war.

But to turn strategically convenient government assertions about such matters into a news story based on no evidence whatsoever is not just journalistic malpractice but actual atrocity propaganda. 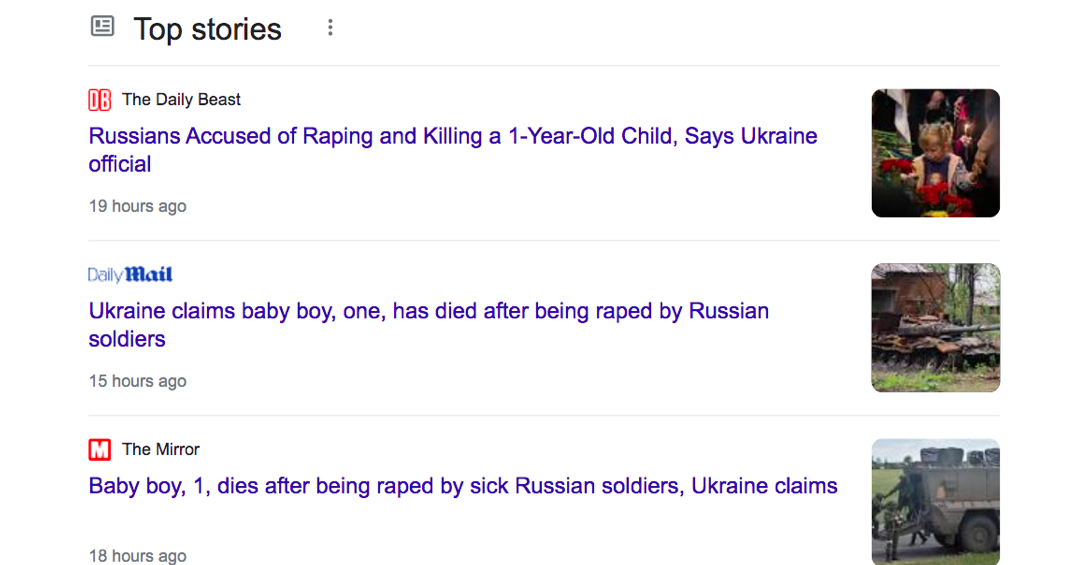 As we discussed previously, the U.S. and its proxies have an established history of using atrocity propaganda, as in the infamous “taking babies from incubators” narrative that was circulated in the infamous 1990 Nayirah testimony which helped manufacture consent for the Gulf War.

Atrocity propaganda has been in use for a very long time due to how effective it can be at getting populations mobilized against targeted enemies, from the Middle Ages when Jews were accused of kidnapping Christian children to kill them and drink their blood, to 17th century claims that the Irish were killing English children and throwing them into the sea, to World War I claims that Germans were mutilating and eating Belgian babies.

Atrocity propaganda frequently involves children, because children cannot be construed as combatants or non-innocents. It generally involves the most horrific allegations the propagandists can possibly get away with at that point in history. It creates a useful appeal to emotion which bypasses people’s logical faculties and gets them accepting the propaganda based not on facts and evidence but on how it makes them feel.

And it’s working. If you search social media for this bogus story that’s been forcibly injected into public discourse you’ll find countless individuals expressing their outrage at the evil baby-raping Russians.

Democratic Party operative Andrea Chalupa, known for her controversial collusion with the Ukrainian government to undermine the 2016 presidential campaign of Donald Trump, can be seen citing the aforementioned Daily Beast article on Twitter to angrily admonish The New York Times editorial board for expressing a rare word of caution about U.S. involvement in the war.

“Before writing this, the members of the New York Times Editorial Board should have asked themselves who among them wanted to have their children, including babies and infants, raped by Russian soldiers, because that is what’s happening in Ukraine,” Chalupa tweeted.

Before writing this, the members of the @nytimes Editorial Board should have asked themselves who among them wanted to have their children, including babies and infants, raped by Russian soldiers, because that is what's happening in Ukraine: https://t.co/upsYpUmuyI https://t.co/UeCbCDTLfr

See that? How a completely unevidenced government assertion was turned into an official-looking news story, and how that official-looking news story was then cited as though it’s an objective fact that Russian soldiers are running around raping babies to death in Ukraine? And how it’s done to help manufacture consent for a geostrategically crucial proxy war, and to bludgeon those who express any amount of caution about these world-threatening escalations?

That’s atrocity propaganda doing exactly what it is meant to do.

Now on top of all the other reasons we’re being given for the U.S. and its allies to send Ukraine more and more war machinery of higher and higher destructive capability, there is now the story of t Russians raping babies to death willy-nilly over there. Which just so happens to work out nicely for the U.S.-centralized empire’s goals of unipolar domination, for the Ukrainian regime and for the military-industrial complex.

"Newsweek has not independently verified the claim." https://t.co/LdnZ8rLdRz

And that wasn’t even the extent of obscene mass media atrocity propaganda conducted on behalf of Ukrainian officials for the day. Newsweek’s article, “Russians Targeting Kids’ Beds, Rooms With Explosives: Ukrainian Bomb Team,” informs us that:

“The leader of a Ukrainian bomb squad has said that Russian forces are targeting children by placing explosive devices inside their rooms and under their beds.”

Then at the end of the second paragraph we again find that magical phrase:

“Newsweek has not independently verified the claim.”

The Newsweek report is based on part of an embarrassing ABC News Australia puff piece about a Ukrainian team which is allegedly responsible for removing landmines in areas that were previously occupied by Russian forces. The piece refers to the team as a “unit of brave de-miners” while calling Russian forces “barbaric.”

ABC uncritically reports all the nefarious ways the evil Russians have been planting explosives with the goal of killing Ukrainian civilians, including setting mines in children’s beds and teddy bears and placing them under fallen Ukrainian soldiers. Way down toward the bottom of the article we see the magical phrase again:

“The ABC has not been able to independently verify these reports, but they back up allegations made by Ukraine’s President.”

Ahh, so what you’re being told by Ukrainian forces “backs up” what you’ve been told by the president of Ukraine. Doesn’t get any more rock solid than that, does it? Great journalism there, fellas.

The Ukrainian government stands everything to gain and nothing to lose by just saying whatever it needs to say in order to obtain more weapons, more funding and increasingly direct assistance from Western powers. So if it knows the Western media will uncritically report every claim it makes, why not lie? Why not tell whatever lie you need to tell in order to advance your own interests and agendas? It would be pretty silly of them not to take advantage of the opening they’re being given.

This is something the Western press know is happening. They know full well that Ukraine is waging a very sophisticated propaganda campaign against Russia and seeding disinformation to facilitate that infowar. It’s not a secret. They are participating in that campaign knowingly.

The CIA Post is going full Babies on Bayonets already. Putin is going to round up and torture all the gays! https://t.co/OJspZdz37P pic.twitter.com/qPyhpHD1gp

The mass media have been cranking out atrocity propaganda about what’s happening in Ukraine since before the invasion even started, like when they reported in February that Russia has a list of dissidents, journalists and “vulnerable populations such as religious and ethnic minorities and LGBTQI+ persons” who it plans on rounding up and torturing when it invades. Funny how we just completely stopped hearing about that one.

And this is all happening at the same time the Western political/media class continues to shriek about the dangers of “disinformation” and the urgent need to strictly regulate its circulation on the internet, even after U.S. officials came right out and admitted that they’ve been circulating disinformation about Russia and Ukraine. I guarantee you none of these completely evidence-free claims will be subject to censorship by the “fact checkers” of social media platforms.

The fact that both Silicon Valley and the mainstream news media have accepted it as a given that it is their job to manipulate public thought about this war tells you everything you need to know about how free and truth-based the so-called liberal democracies of the Western world really are. We are being deceived and confused into consenting to agendas that could very easily lead to nuclear Armageddon, and if we ever raise our voices in objection to this we are branded Putin propagandists and disinformation agents.