Amid persistent La Niña conditions and a generally hotter, thirstier atmosphere, Imtiaz Rangwala describes the various forms of drought that lie ahead, some of which coincide with higher levels of precipitation. 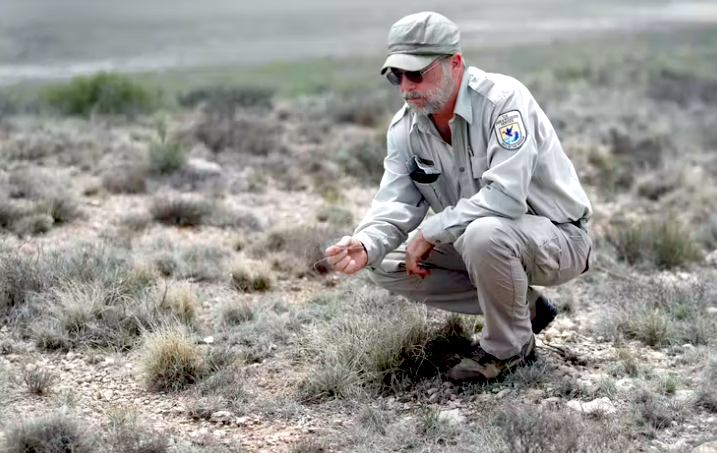 Farmers in some regions are being encouraged to preserve and establish grasslands that can survive drought and protect the soil. (AP Photo/Mark Rogers)

Much of the western U.S. has been in the grip of an unrelenting drought since early 2020. The dryness has coincided with record-breaking wildfires, intense and long-lasting heat waves, low stream flows and dwindling water supplies in reservoirs that millions of people across the region rely on.

Heading into summer, the outlook is pretty grim. The National Weather Service’s latest seasonal outlook, issued May 19, 2022, described drought persisting across most of the West and parts of the Great Plains.

One driver of the Western drought has been persistent La Niña conditions in the tropical Pacific since the summer of 2020. During La Niña, cooler tropical Pacific waters help nudge the jet stream northward. That tends to bring fewer storms to the southern tier of the U.S. and produce pronounced drought impacts in the Southwest.

The other and perhaps more important part of the story is the hotter and thirstier atmosphere, caused by a rapidly warming climate. 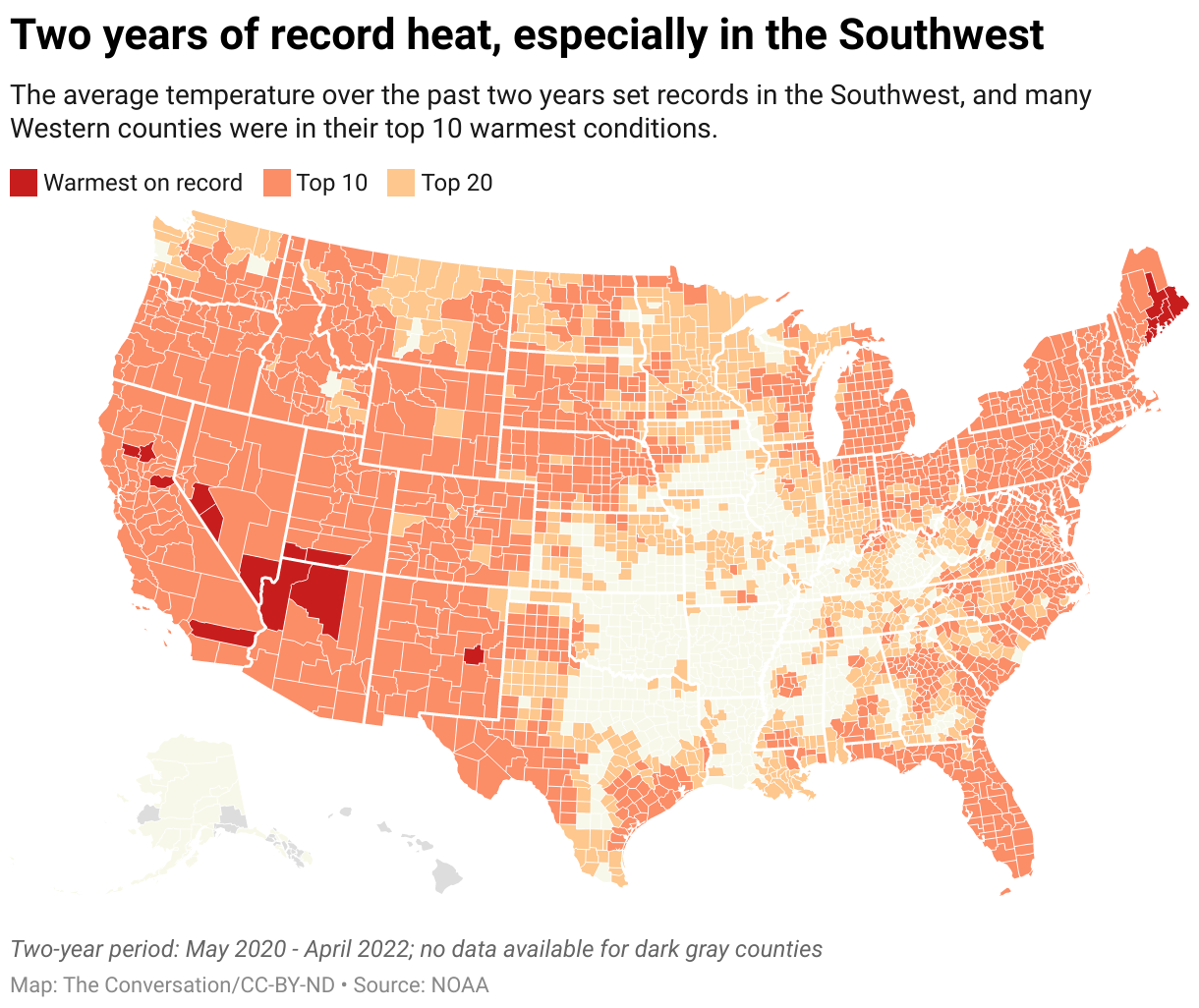 As a climate scientist, I’ve watched how climate change is making drought conditions increasingly worse – particularly in the western and central U.S. The last two years have been more than 2 degrees Fahrenheit (1.1 Celsius) warmer than normal in these regions. Large swaths of the Southwest have been even hotter, with temperatures more than 3 F (1.7 C) higher. Studies suggest the Southwest’s ongoing 20-year drought is the most severe in at least 1,200 years, based on how dry the soils are.

A thirstier atmosphere tends to extract more water out of the land. It exacerbates evaporative stress on the land, particularly when a region is experiencing below-normal precipitation. High evaporative stress can rapidly deplete soil moisture and lead to hotter temperatures, as the evaporative cooling effect is diminished. All this creates hydroclimatic stress for plants, causing restricted growth, drying and even death.

As a consequence of a warming climate, the U.S. Southwest has seen an 8 percent increase in this evaporative demand since the 1980s. This trend is generally happening across other parts of the country.

The thirstier atmosphere is turning what would otherwise be near-normal or moderately dry conditions into droughts that are more severe or extreme. As the climate heats up further, the increasing atmospheric thirst will continue to intensify drought stress, with consequences for water availability, long-lasting and intense heat stress and large-scale ecosystem transformation.

Climate models project ominous prospects of a more arid climate and more severe droughts in the Southwest and southern Great Plains in the coming decades.

In addition to direct impacts of increasing temperatures on future droughts, these regions are also expected to see fewer storms and more days without precipitation. Climate models consistently project a poleward shift in the midlatitude storm tracks during this century as the planet heats up, which is expected to result in fewer storms in the southern tier of the country.

The changing nature of droughts is a concern even in parts of the U.S. that are expected to have a net increase in annual precipitation during the 21st century. In a hotter future, because of the high evaporative demand on the land, prolonged periods with weeks to months of below normal precipitation in these areas can lead to significant drought, even if the overall trend is for more precipitation.

Large parts of the northern Plains, for example, have seen precipitation increase by 10 percent or more in the last three decades. However, the region is not immune to severe drought conditions in a hotter climate.

At the tail end of what was the wettest decade on record in the region, the northern Plains experienced an intense flash drought in the summer of 2017 that resulted in agricultural losses in excess of $2.6 billion and wildfires across millions of acres. Record evaporative demand contributed to the severity of the flash drought, in addition to a severe short-term precipitation deficit. A flash drought is a drought that intensifies rapidly over a period of a few weeks and often catches forecasters by surprise. The likelihood of flash droughts that can cause severe impacts to agriculture and ecosystems and promote large wildfires is expected to increase with a warmer and thirstier atmosphere.

As humanity enters a hotter future, prolonged periods of weeks to months of below-normal precipitation are going to be of a greater concern almost everywhere.

Other forms of droughts are also emerging.

Atmospheric heating is causing snow droughts as more precipitation falls as rain rather than snow and snow melts earlier. Shorter snow seasons and longer growing seasons because of warmer temperatures are changing the timing of ecological responses. 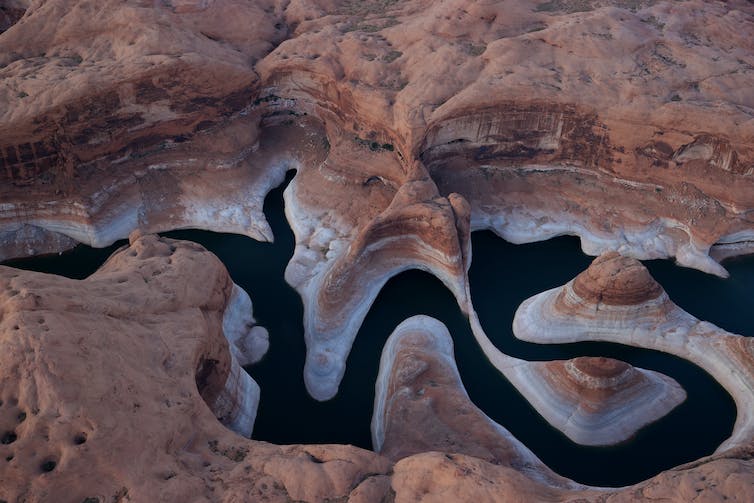 The “bathtub ring” on Lake Powell, one of the nation’s largest reservoirs, attests to its falling water level over two decades of drought in Arizona. The Colorado River reservoir is crucial for water supplies and hydropower. (Justin Sullivan/Getty Images)

Land is greening up earlier and causing an earlier loss of water from the land surface through evapotranspiration – the loss of water from plants and soil. This could result in drier soils in the latter half of the growing season. As a result, parts of the central and western U.S. could see both increased greening and drying in the future that are seasonally separated across the growing season.

With a rapidly changing climate, we are entering unfamiliar territory. The world will need new ways to better anticipate future droughts that could transform natural and human systems.

Imtiaz Rangwala is a research scientist in climate at the Cooperative Institute for Research in Environmental Sciences at the University of Colorado Boulder.

15 comments for “Grim 2022 Drought Outlook for Western US”