In their less-guarded moments, even the worst empire managers know deep down what is true and let it slip out. 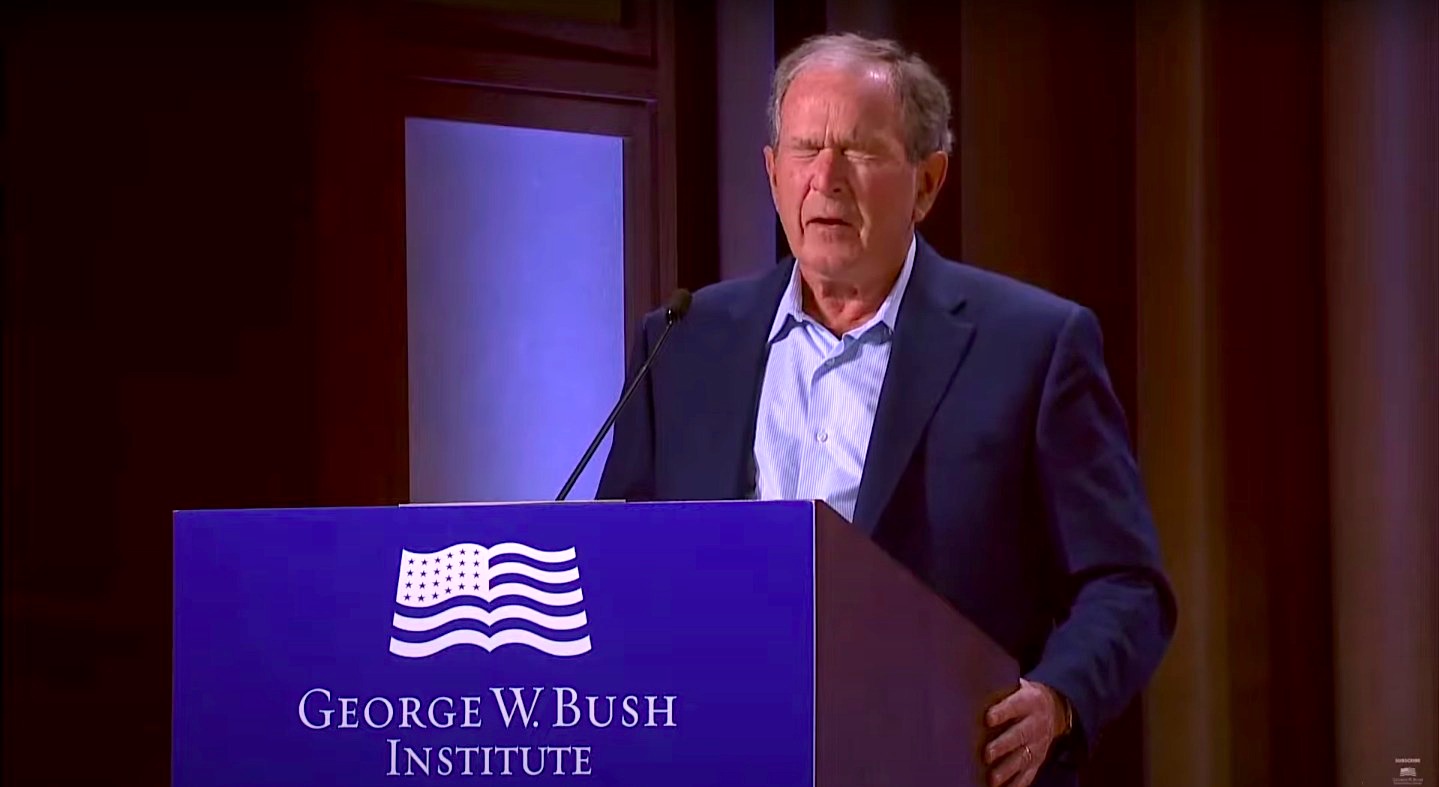 I can’t believe it really happened.

During a speech in Dallas at Southern Methodist University’s George W. Bush Presidential Center on Wednesday, the man himself, George W. Bush, did a great thing.

While criticizing Russia for rigging elections and shutting out political opposition (which would already be hilarious coming from any American in general and Bush in particular), the 43rd president made the following comment:

“The result is an absence of checks and balances in Russia, and the decision of one man to launch a wholly unjustified and brutal invasion of Iraq. I mean, of Ukraine.”

And then it got even better. After correcting himself with a nervous chuckle, Bush broke the tension in the empire-loyal crowd with the words, “Iraq too. Anyway.” He then quipped that he is 75 years old, leaning harder on his “Aw shucks gee willikers I’m such a goofball” persona than he ever has in his entire life.

And Bush’s audience laughed. They thought it was great. A president who launched an illegal invasion that killed upwards of a million people (probably way upwards) openly confessing to doing what every news outlet in the Western world has spent the last three months shrieking its lungs out about Russian President Vladimir Putin doing was hilarious to them.

There are not enough shoes in the universe to respond to this correctly.

As comedian John Fugelsang put it, “George W. Bush didn’t do a Freudian slip. He did a Freudian Confession.”

One of the many interesting things about this occurrence is the likelihood that Bush’s words tumbled out in the way they did because he’s either heard a lot of criticisms of his invasion or has been thinking a lot about them.

A familiar neural pathway would explain why his brain chose the exact worst word he could possibly swap out for “Ukraine” in that moment. This would be a small light in the darkness for we ordinary folk who oppose war and love peace, because it suggests that even the worst empire managers cannot fully insulate themselves from our criticisms.

Speaking of George W. Bush and Iraq, the current president was also instrumental in bringing about that war — not just by voting for it, but by using his pulpit as chairman of the Senate Foreign Relations Committee to advocate for it. But today he's got Ukraine all figured out

All that spin and narrative management they’ve been pouring into the U.S. proxy war in Ukraine and Bush undoes it all with the Bushism to end all Bushisms.

While the Western political/media class constantly rends its garments over “disinformation” about the Ukraine war even as U.S. officials openly admit they’ve been using the media to circulate disinformation about that same war, and even as the Biden administration imprisons and persecutes a journalist for exposing U.S. war crimes, we get a square admission that the U.S. is no better than Russia and that the only thing obscuring this is the fact that we are all swimming in a sea of disinformation and propaganda provided by that same political/media class.

And this admission comes not from any low-level empire lackey, but from the man himself. The guy. The man whose name alone serves as a one-word debunk of every claim made about how uniquely nefarious Vladimir Putin is on the world stage and how uniquely depraved is his invasion of Ukraine.

If you really look at what just happened, really truly ingest it, this one incident just by itself is enough to show you that we are swimming in a sea of lies designed to give us an upside-down and ass-backwards perspective of what’s going on in the world.

If Bush himself can’t always tell the difference between the invasion of Iraq and the invasion of Ukraine, then this means our news media and our politicians are lying to us constantly. They lied to us through 2002 and 2003, and they never stopped lying, and they are lying now in the year 2022.

The entire mainstream worldview is a perceptual distortion filter which obscures the public understanding of world events so severely that Bush has been not just forgiven for his crimes but actively rehabilitated in the public eye, while the enemies of the United States are continuously compared to Adolf Hitler and condemned throughout the U.S.-dominated world.

In reality the U.S. is the single most tyrannical and destructive government on this planet, and it is only because the public is fed a nonstop deluge of propaganda that this isn’t universally obvious.

Even the worst empire managers know deep down that this is true, and, in their less guarded moments, sometimes the truth slips out.

← US Risks Sinking Americas’ Summit
Bush Admits US Broke Promise on NATO Expansion; Says Ukraine Should ‘Destroy as Many Russian Troops’ as Possible →