Democrats and Neocons have integrated in the age of Trump, writes Caitlin Johnstone. 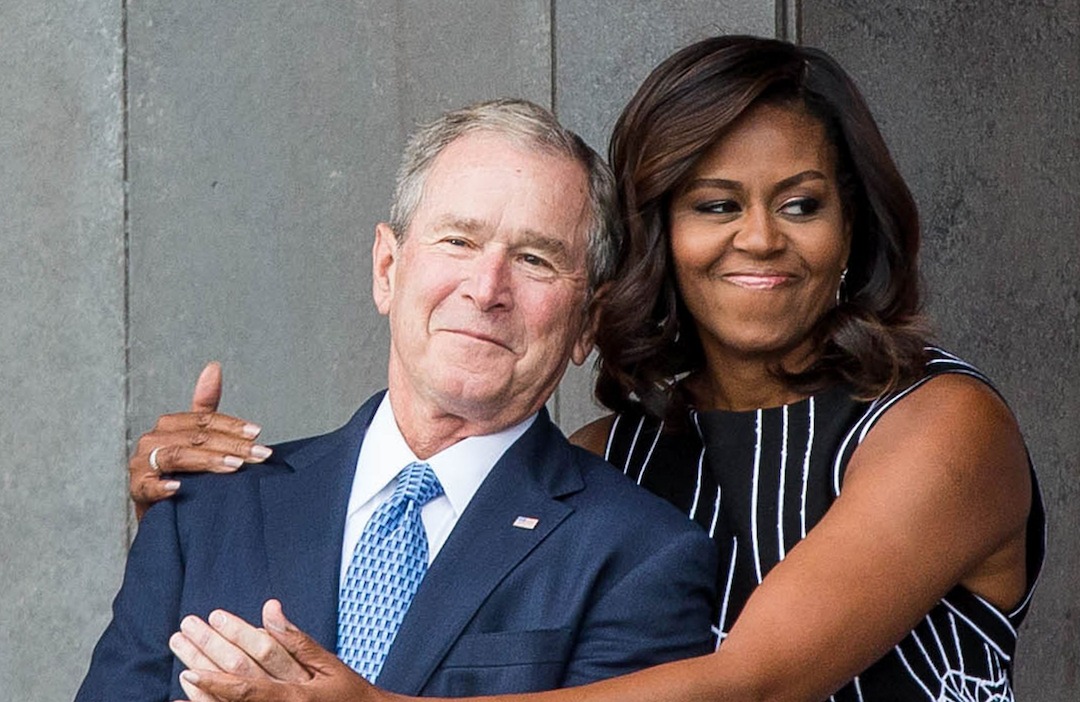 Former President George W. Bush is in the news and once again it’s not for the only legitimate reason that he should ever be in the news, namely a war crimes tribunal. No, it’s because his voice was used in a cutesy feel-good video about unity during the Covid-19 pandemic.

“Let us remember how small our differences are in the face of this shared threat,” Bush is heard saying. “We are not partisan combatants. We are human beings, equally vulnerable and equally wonderful in the sight of God.”

And, needless to say, Democrats are all over social media orgasming in their pants about it.

“A REAL president,” tweeted the other Alyssa Milano, Debra Messing.

“In a million years I never thought I’d be crying watching this, thinking how much better we’d all feel if Bush were president today,” tweeted former Democratic Congresswoman Katie Hill to thunderous online applause.

In a million years I never thought I’d be crying watching this, thinking how much better we’d all feel if Bush were president today. Wtf. https://t.co/SSR3ieZEFP

For years rank-and-file Democrats have been giving the true Butcher of Baghdad a majority approval rating, running with the common narrative that while Bush perhaps made some “mistakes,” Trump is spectacularly worse. Here are five things that are highlighted by that common perspective:

No. 1. It shows how little Democrats care about the lives of human beings overseas.

By the end of his first term Bush had launched two full-scale ground invasions, murdered a million Iraqis, destabilized an entire region in a way that would shortly give rise to ISIS, and ushered in a whole new level of unprecedented U.S. military expansionism and imperialism. Trump has done none of these things. He has inflicted many evils upon our world and, like former President Barack Obama, has continued and expanded the warmongering of his predecessors. But he has done nothing that rises to the level of depravity of Bush’s wars.

The fact that Democrats see Trump’s evils as not only equal to but far in excess of Bush’s reveals as plain as day that, for all their supposed bleeding-heart liberal sensibilities, they simply do not place much value on the lives of foreigners. Sure, they might enjoy a little masturbatory melodrama over kids in cages when it shows up on their doorstep, but kids getting ripped to shreds by cluster bombs and being born severely disabled from depleted uranium munitions simply does not register for them, because they don’t have to look at it.

They do not care. Rude tweets and racism are worse than institutionalized mass murder for them, because they have to look at one but not the other.

No. 2. It shows that Trump-era Democrats are Bush-era Republicans.

The problem is that Bush and Cheney’s operatives, speechwriters, policy advisers, propagandistas and top aides are the close friends and colleagues of media liberals and DC Democrats and their beloved pundits, so they have to whitewash Bush’s evil to justify themselves: https://t.co/Z1C3CB7JQn

“Dems have no choice but to rehabilitate George Bush because their core narrative is the US was a fundamentally good and decent land before Trump vandalized it,” journalist Glenn Greenwald tweeted in response to Democrats’ fawning over Bush, adding, “How do you join with Bill Kristol, Nicole Wallace, Rick Wilson, David Frum and the CIA without whitewashing Bush’s crimes?”

Indeed, Bush-era neocons have been able to fully ingratiate themselves to and integrate themselves with Democrats in the age of Trump by posing as moral opposition longing for a more civilized time when presidents would politely butcher humans by the hundreds of thousands without using offensive language like “shit hole.” A gentlemanly time for gentlemanly presidents to unfold gentlemanly torture and surveillance policies all around the world without posting rude tweets about celebrities they don’t like.

Trump-era Democrats are Bush-era Republicans. That’s how far to the authoritarian right the party has moved in the last few years on important matters like foreign policy. You can see this by the shrieking, hysterical response they had to Tulsi Gabbard calling for what more or less amounted to a simple reversion back to pre-9/11 U.S. foreign policy. It has been necessary for Democrats to gaslight themselves into this position because for three presidential campaigns in a row–Obama 2012, Clinton 2016, and now Biden 2020–they’ve had to find ways of convincing themselves that a politician who has facilitated Bush’s foreign policy agendas would make a good commander-in-chief.

No. 3. It shows how the amnesia-inducing effects of the mass media news churn make it difficult to retain perspective.

The News Churn Memory Hole: How The MSM Lies Even When Telling The Truth

"It’s not enough to simply expose the truth. You must also fully, repeatedly and consistently expose the ones who are telling lies."https://t.co/OSW6eFQVAn

Mass media propagandists are able to distort perception even while telling the truth using the news churn memory hole. Even when forced to report on uncomfortable truths like not finding any weapons of mass destruction in Iraq or the fact that the occupation of Afghanistan has been justified by an entire generation of lies, the memory of that reporting can be made to fade into the background by frantically reporting on what’s happening right now without referring back to the previous revelations.

Russiagate alone did so much to distort people’s perceptions in mainstream liberal circles. Having the baseless narrative breathlessly promoted year after year after year that the Kremlin had literally seized control of the highest levels of the U.S. government left rank-and-file Democrats who subscribed to it without any sense of scale or proportion, because they were constantly being told that the Most Important Thing Ever was about to happen. How can you hold perspective on a million dead Iraqis when you’re being told day after day, year after year in myriad ways that Russian Hitler was controlling your country but Super Mueller is going to swoop in to the rescue any minute now? It would be very difficult.

No. 4. It shows the glaring difference between fact and narrative.

Most of the mass media reporting on Trump has been factual, it’s just had a ton of narrative spin attached to the facts. It is a fact that Trump frequently says and does dumb, obnoxious and horrible things. It is a fact that many racists think he’s the cat’s pajamas. It is a fact that there was an impeachment and a collusion investigation. But the narrative overlay that has been heaped upon those facts while they’re being reported — the urgency, the alarmism, the hyperbole — leaves viewers with the distinct impression that this U.S. president is awful in a way that is unique and historically unprecedented, and he simply isn’t.

Trump is not worse than Bush, the mass media just yell about him a lot more. If the narratives matched the facts, mass media consumers would be aware that nothing Trump has done is as evil as Bush’s invasion of Iraq alone. In reality Trump didn’t wind up being another Hitler, he wound up being another Obama (not a compliment). And if the narrative spin matched the factual reality, people would understand that.

liberals have the baffling ability to simultaneously believe both that George W. Bush was a good president whom they love and miss dearly AND that Ralph Nader is a piece of shit who's going to burn in hell for supposedly getting George W. Bush elected

No. 5. It shows that this simply is not working.

Imagine you’re out in the woods with a friend you trust in the dark. You know there’s a horrible monster out there stalking you, and suddenly you hear it in the distance coming crashing towards you. It has picked up your scent and it will be upon you in moments.

You turn to run, but your friend grabs you and won’t let you move. He falls to the ground grabbing your legs screaming “No! No! We must stay here! We mustn’t move an inch!”

Who do you need to fight first? The monster? Or your “friend?”

That’s why I focus so much of my criticism on the Democratic Party instead of the Republicans. Ultimately, they’re the party which could actually allow for positive changes to be made to the world, but instead they keep moving further and further into the warmongering totalitarianism they once purported to despise in George W. Bush.

Relying on either head of the two-headed one-party system to make meaningful changes simply is not working, and will not ever work. No institution that would so warmly rehabilitate and welcome a bloodthirsty monster like Bush is going to help humanity one iota. In fact, its sole purpose is to do the exact opposite.