Among other recommendations, Ihab Maharmeh says the BDS movement should further center the violation of Palestinian workers’ rights in its call for boycotts of Israeli companies. 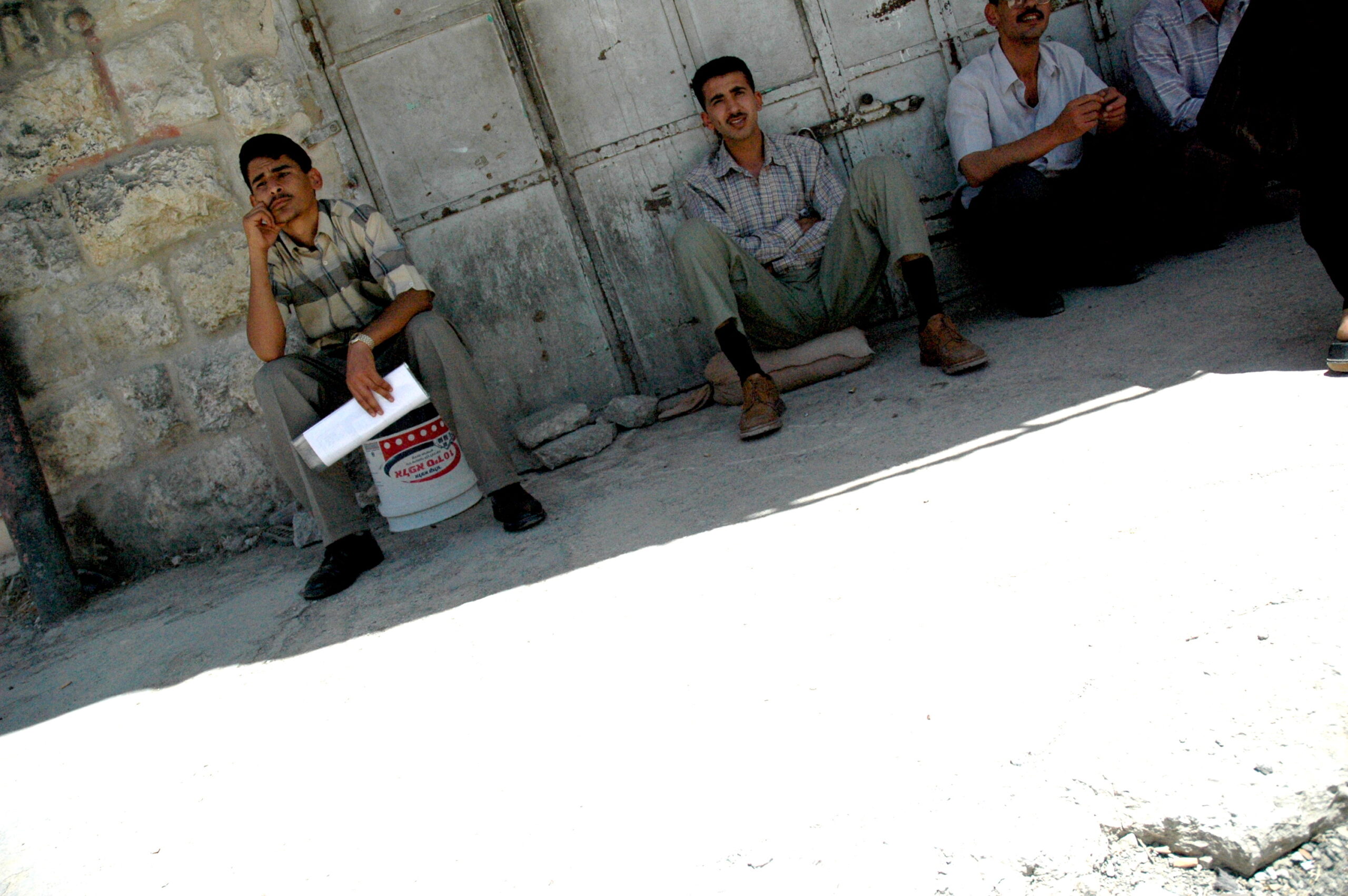 Palestinians with West Bank IDs began to flow into Israel and the settlements in the wake of the 1967 war, when Israel occupied the West Bank, Gaza, the Sinai Peninsula, and the Golan Heights.

Two factors combined to increase this influx: the Israeli regime needed workers for its burgeoning settlement enterprise, and Palestinians’ urgent need for employment after the destruction of their economy in the aftermath of the 1948 war.

As the Israeli regime could offer higher wages and greater opportunities for employment, Palestinians rushed to fill these positions. However, by absorbing the flow of Palestinian workers, Israel primarily sought to control the main factors of Palestinian production with an eye to weakening, depleting, and controlling the Palestinian economy, forcibly bringing it under Israeli control.

Palestinians have since become a major labor force within Israel, especially in the construction and services sectors. Their number rose from 20,000 workers in 1970 to 116,000 in 1992, increasing at an average of 6.3 percent annually.

After signing the Oslo Accords in 1993 and the subsequent 1994 Paris Protocol, which formally integrated the Palestinian economy into Israel’s and closed Palestinian borders to the global economy, Israel imposed restrictions on the movement of Palestinian workers from the West Bank and Gaza and limited the number of work permits granted to Palestinians. 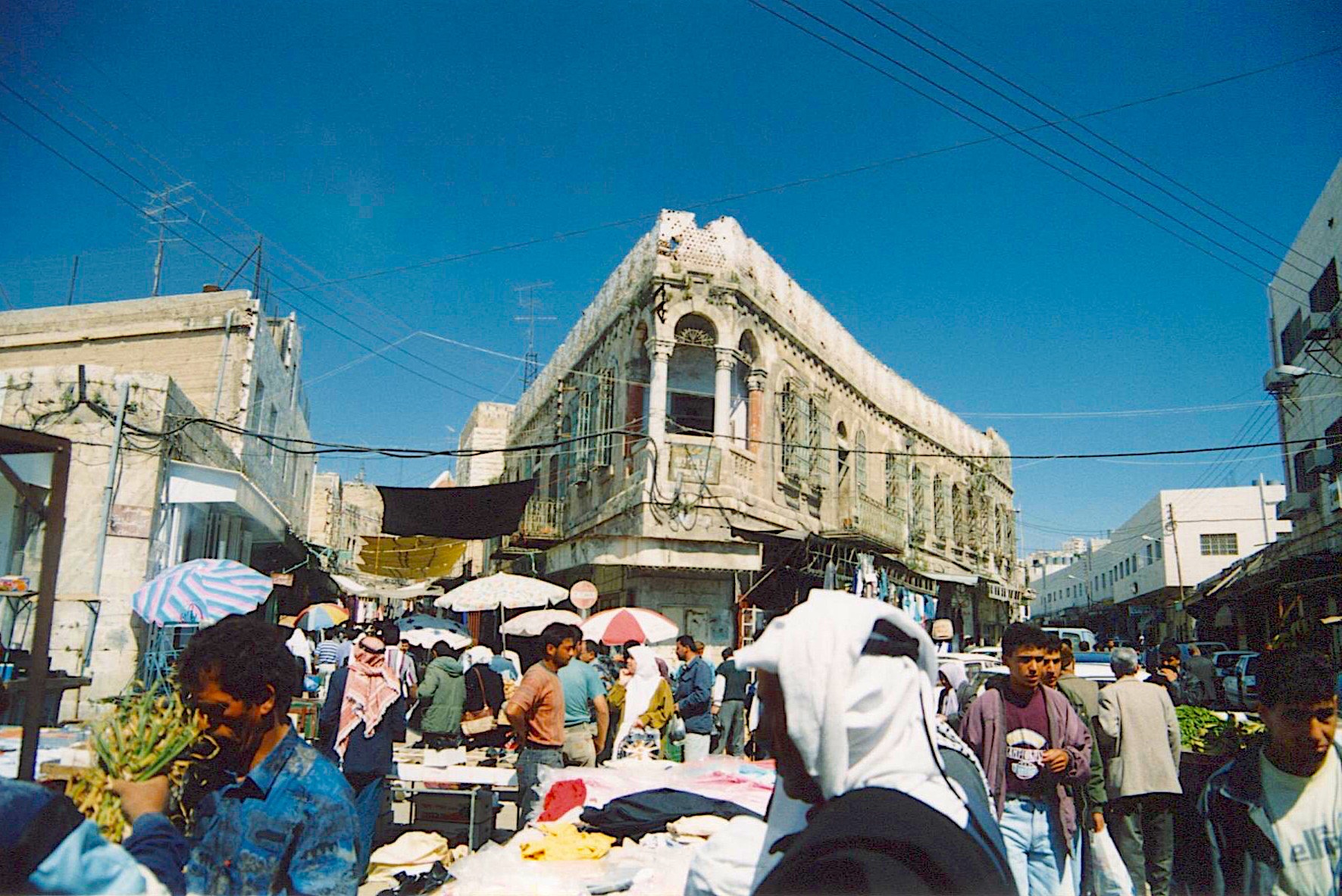 Street market in the Palestinian city of Hebron in 1995. (Casliber, CC0, Wikimedia Commons)

A case in point is the aftermath of the Second Intifada, which was followed by a noticeable jump in the number of Palestinian workers in Israeli territories, as outlined in the following table:

Although the ability to work in Israel and the settlements has allowed Palestinians to find job opportunities, earn higher incomes (albeit, on average, less than half the Israeli minimum wage), and improve their economic conditions since the late 1960s, these workers suffer abysmal working conditions, lack adequate safety measures and insurance, and often complain of violations of Israeli labor laws and Israeli-ratified international labor standards and covenants, particularly in relation to wages, working hours, and leave policies. These conditions have only been exacerbated since the Covid-19 pandemic.

Furthermore, Israel’s rule over the main production factors in the Palestinian economy has hindered its ability to create job opportunities. Israel continues to control and restrict access to Palestinian lands and natural resources, forcing about a quarter of the West Bank’s Palestinian population to forfeit working in several vital sectors — notably, the agricultural sector, a major source of Palestinian employment and livelihood prior to the Oslo Accords. 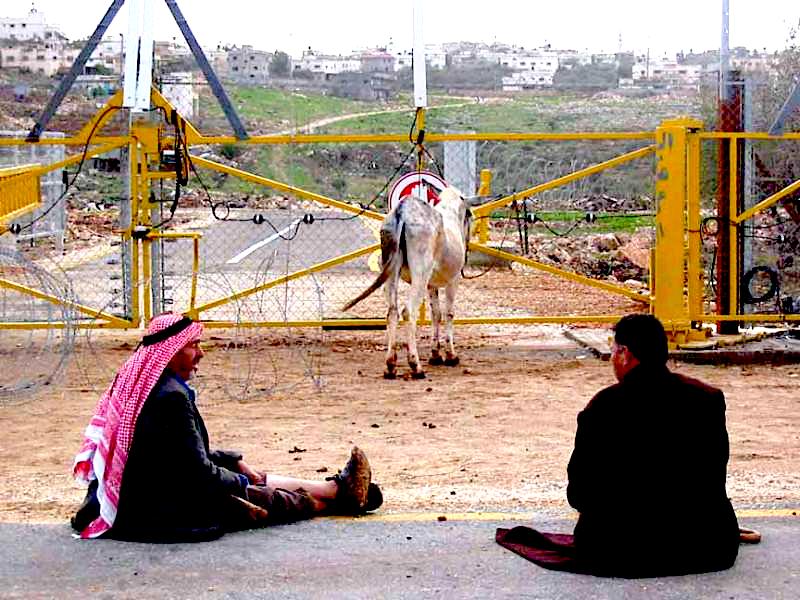 Dec. 9, 2006: Palestinian farmers waiting to be let back through the Apartheid Wall to their West Bank village after going to their land. (FREEPAL, Flickr, CC BY-NC-SA 2.0)

Indeed, since the 1993 agreement, the expansion of settlements and theft of Palestinian lands and natural resources have crippled the Palestinian economy, forcing Palestinians to forsake working their own lands and seek employment in Israel and the settlements.

Moreover, since 1967, Israel’s establishment of military checkpoints has limited the movement of Palestinians and the exchange of goods and merchandise between Palestinian cities and villages. Within this fragmented landscape, which ultimately serves Israel’s economic interests, only Palestinians with work permits issued by the Israeli regime are permitted movement in and out of settlements, Jerusalem, and Israel. In this way, work permits serve to affirm the Israeli regime’s ongoing strategy to manage and control Palestinians’ movement, and to confine them to work spaces that violate international labor standards and laws, continually putting them at great risk. 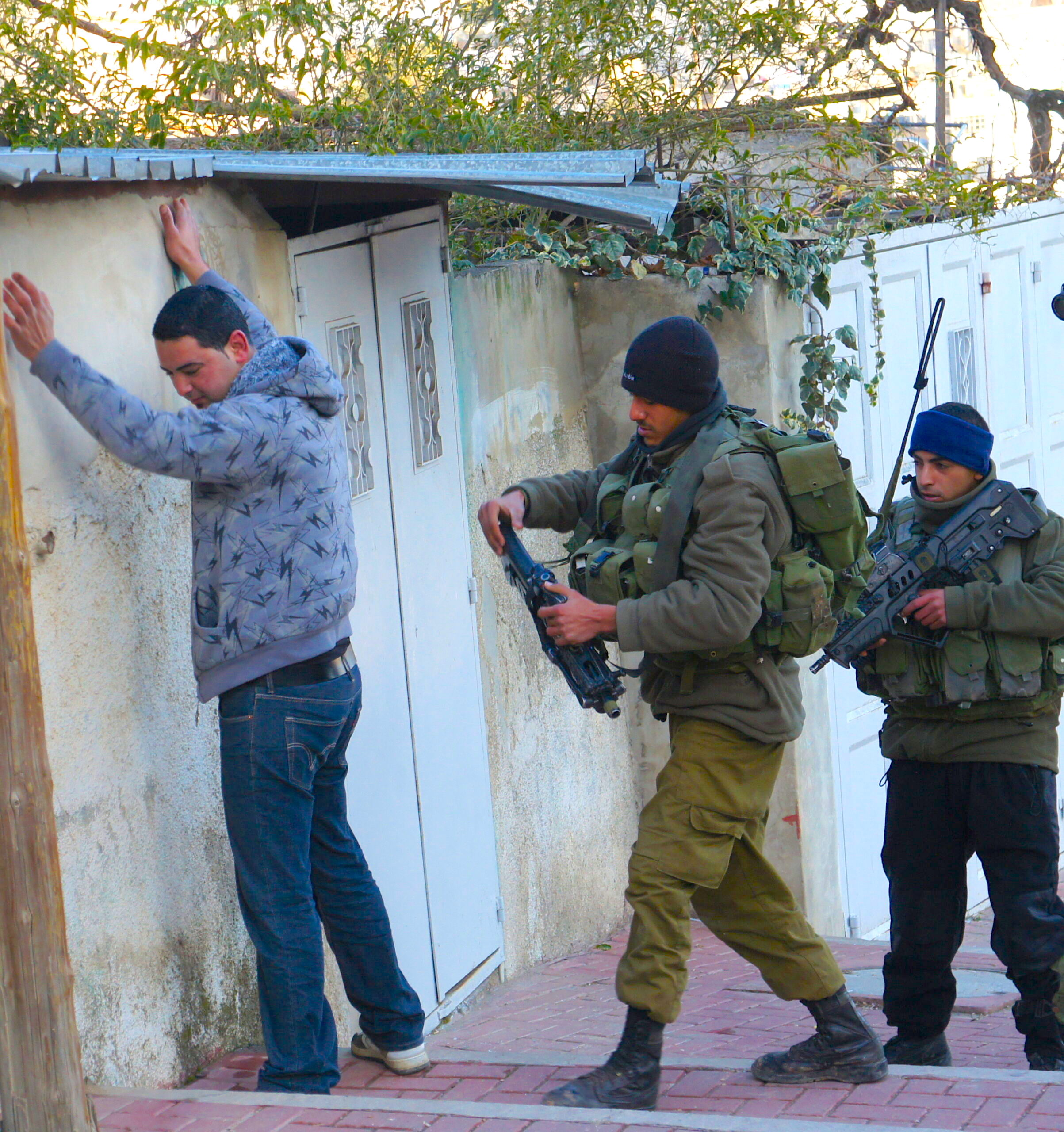 Following decades of the Israeli regime deliberately thwarting Palestinian efforts to build an economy that can accommodate its working-age population, Palestinian workers have been left with few alternatives for employment within the West Bank and Gaza. This has posed a serious problem for laborers following the outbreak of the Covid-19 pandemic, which spread at an alarming rate across Israel at the start of 2020. With soaring infection rates and abysmal working conditions, Palestinian workers were the main transmitters of the virus to the West Bank.

Prior to the outbreak of Covid-19, Israeli abuses of Palestinian workers’ rights were well documented, including pressuring them to cooperate with the Israeli intelligence service in exchange for work permits. Since the outbreak, these abuses have only increased.

In April 2020, as the pandemic spread widely in Israel, the West Bank, and Gaza, Palestinian workers were required to download “Al-Munasiq” (The Coordinator), an Israeli mobile application developed in February 2019 by the Israeli Ministry of Defense at the request of the Israeli Civil Administration to better manage Palestinian applications for Israeli permits. Yet the Palestinian Digital Rights Coalition warns that downloading the application offers Israel the opportunity to further blackmail, exploit, and humiliate Palestinians.

Throughout the pandemic, as demographic control remains a paramount concern for governments, the application has served the Israeli regime’s population management strategy perfectly: the application collects information and personal data from the cellphones of Palestinian workers, including device location, incoming and outgoing calls, photos and videos, messages and email, and data from other third-party applications. Forcing workers to download Al-Munasiq in order to access and work on colonized Palestinian lands is yet another mechanism in the history of Israeli exploitation, humiliation, and extortion of Palestinians. 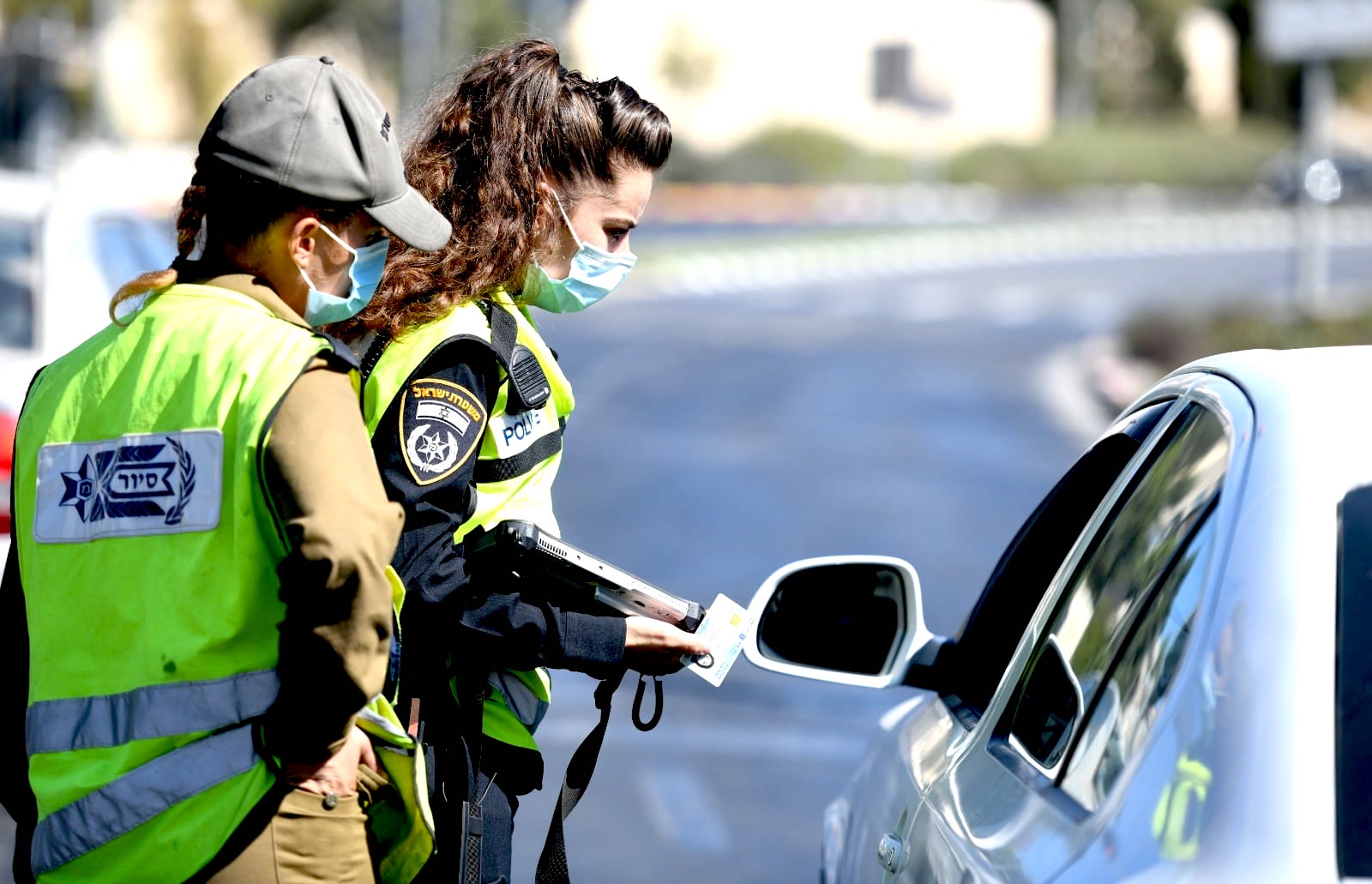 Since the start of the pandemic, Palestinian workers have also suffered further abuses by Israeli soldiers on their way to work, especially their right to freely access their workplaces.

On Aug. 17, 2020, Israeli and international media circulated evidence of the types of Israeli crimes that have been committed since May 2020; this included a recording of Israeli soldiers beating, insulting, and robbing Palestinian workers at gunpoint as they crossed military checkpoints in the southern West Bank to reach their places of employment.

Israeli occupation soldiers have also been seen firing tear gas canisters at workers crossing Israeli checkpoints, and at those without permits who attempt to breach Israel’s Apartheid Wall through its sporadic gaps, as well as chasing and stalking Palestinian laborers on their way to work. These violations culminated in the murder of two Palestinians while on their daily commute by Israeli soldiers. The killings of Fouad Sebti of Tulkarm on Jan. 24 and Sherif Rajeh Irzeigat of Hebron on Feb. 14, demonstrate the cruelty of these violations in the time of Covid-19.

Indeed, Covid-19 has highlighted the hazardous conditions faced by Palestinian workers, rendering their need to maintain their source of livelihood by working in Israel and the settlements into an economy of death.

Five Palestinian laborers died at Israeli construction and industrial sites in the past week. Disposable labor to grow the wealth of the settler state https://t.co/wpaTxiD4g6

For example, Palestinian workers risk their lives during their stays in Israel due to the lack of public safety measures in their accommodations. Workers have recounted sleeping in large groups at construction sites, on factory floors, in warehouses, gardens, facilities, and greenhouses, in areas without clean bedding or blankets, and without access to sanitation and necessary supplies to maintain personal hygiene.

In May 2020, numerous images circulated on social media exposed the unhygienic accommodations and unhealthy living conditions of workers in construction sites and warehouses. In addition, those workers were not provided food or drink in their accommodations due to imposed curfews across Israel and the settlements.

Subsequently, Palestinian workers reported a lack of preventive measures in their workplaces, and the failure of their Israeli employers to provide them with necessary medical tests or proper treatment in cases of Covid-19 infection. In response, Israeli authorities expelled or abandoned these workers at Israeli checkpoints. One video clip circulated on social media showed Palestinian worker, Malek Ghanem, being dumped by the Israeli authorities on the side of the road at the Beit Sira checkpoint, near Ramallah, because he was suspected of being infected with Covid-19. This was followed by similar incidents across the West Bank. 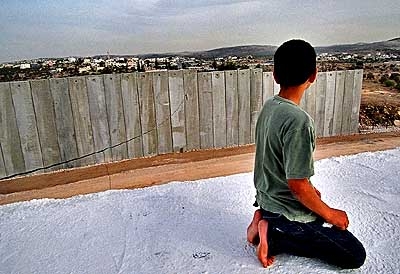 Combined, these workers’ income is crucial for boosting the performance of the Palestinian economy; any changes thereto — namely, via the loss of jobs in Israel and the settlements — will directly affect hundreds of thousands of Palestinian families.

This became particularly evident when the number of workers in Israel and settlements decreased at the end of 2020 by about 34,000 workers. The decline was more pronounced in the construction sector, with 15 percent of 70,000 Palestinian workers losing their jobs, followed by the agricultural sector, with a 9 percent decrease.

Moreover, about 8,000 Palestinian workers lost their jobs in Israel and the settlements by the end of 2020 due to layoffs of workers over the age of 50 — a direct result of the PA-approved Israeli special provisions to regulate Palestinian labor during the pandemic.

Many Palestinian workers have likewise faced wage cuts since April 2020 — a violation of Israeli labor laws which prohibit discrimination based on nationality. Israeli employers reduced the average daily wage for Palestinian workers in Israel and the settlements in the first half of 2020 from $82 to $76. While they raised it to $80 in the second half of the same year, this is still below the pre-pandemic level. Moreover, when Palestinian workers adhered to the PA’s order to refrain from reporting to work in Israeli territories, Israeli employers refused to compensate them for their forced absence from work, resulting in financial losses estimated at $250 million in 2020.

The following are policy recommendations for ending Israeli violations of the rights of Palestinian workers in Israel and the settlements:

Ihab Maharmeh is a researcher at the Arab Center for Research and Policy Studies in Doha, and the editorial secretary of Siyasat Arabiya. He has worked at Birzeit University, where he earned his BA in public Administration and his MA in International Studies from the Ibrahim Abu-Lughod Center for International Studies. He also holds an MA in Public Policy and International Cooperation from the Doha Institute for Graduate Studies. He has published several research papers in peer reviewed journals on settler colonialism, forced displacement, Palestinian workers in Israel and its settlements, and everyday Palestinian resistance.

This article is from Al-Shabaka.