Meanwhile, Israel’s U.S. ambassador wants the 35 U.S. states that have outlawed or criminalized boycotts of Israel to take legal action against the ice cream maker. 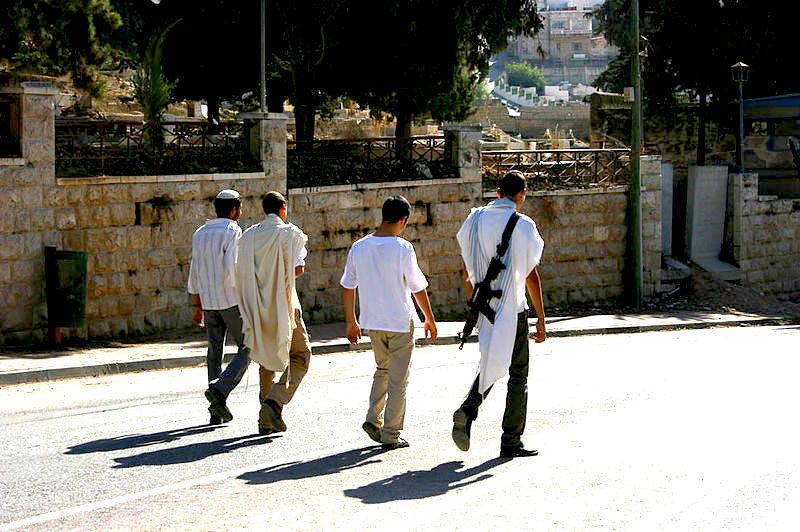 Settlers on Shuhada Street in Hebron, 2010. (Stella via Wikimedia)

While welcoming the decision by Ben & Jerry’s to stop selling their ice cream in the criminally occupied West Bank and East Jerusalem settlements in Palestine, a coalition of progressive groups this week implored Unilever, the frozen dessert-maker’s parent company, to end all business with Israel.

However, the groups added that “the unwavering fight for justice isn’t over… until Ben & Jerry’s ends all business with apartheid Israel.”

“The Israeli state can’t be separated from its apartheid and military occupation,” the statement asserted. “Ben & Jerry’s must now fully commit to standing on the right side of history by completely ending its complicity in Israel’s separate-and-unequal apartheid regime.”

On Monday, Ben & Jerry’s published a statement explaining that the company believes “it is inconsistent with our values” for its “ice cream to be sold in the Occupied Palestinian Territory,” but that it would “stay in Israel through a different arrangement.”

Along with @AdalahJustice & @Mvmnt4BlkLives, we welcome Ben & Jerry’s decision to stop sales in illegal Israeli Jewish-only settlements, and we call on Unilever to align with the Ben & Jerry’s board to end all business with apartheid Israel.

Until then, the boycott continues. pic.twitter.com/VD8GQyAd9c

The decision infuriated many Israelis and supporters of the country, with Prime Minister Naftali Bennett vowing to “act aggressively” against the company and Foreign Minister Yair Lapid calling the decision a “shameful surrender to antisemitism, to BDS, and to all that is wrong with the anti-Israel and anti-Jewish discourse.”

Lapid and Gilad Erdan, Israel’s ambassador to the United Nations and United States, also said they would pressure the 35 U.S. states that have outlawed or criminalized boycotts of Israel to take legal action against Ben & Jerry’s.

Meanwhile, as progressive Jewish-led organizations praised the company’s decision, politicians, pundits, and other observers in both Israel and the United States leveled predictable accusations of anti-Semitism, Nazi collaboration and self-hatred against Ben & Jerry’s and its Jewish founders, Ben Cohen and Jerry Greenfield.

The Zionist response to Ben and Jerry's announcement that they are pulling out of Israeli settlements follows the predictable pattern of "they are anti-semites" and "they are emboldening the terrorists."

Is anyone falling for this any more?

Sandra Tamari, executive director of Adalah Justice Project, said in a statement that Ben & Jerry’s decision “may be our most important BDS win to date.”

“It opens the door for other mainstream companies to heed the Palestinian call for cutting ties with the Israeli state,” said Tamari. “The over-the-top response by Israeli leaders to the company’s announcement, including threats to compel U.S. states to apply unconstitutional state laws limiting boycotts against Israel, shows that immaterial victories such as these can make a vast empire tremble, and that is the power of organizing.”

Following years of #BDS campaigns @benandjerrys has announced it will end sales of its ice cream in Israel's illegal settlements on stolen Palestinian land.

We warmly welcome their decision but call on Ben & Jerry's to end all operations in apartheid Israel.#BDSsuccess pic.twitter.com/0n1AjnPFaA

Montague Simmons, director of strategic partnerships for Movement for Black Lives, said that his organization “supports and defends the unobstructed freedom and self-determination of the Palestinian people.”

“Black and Palestinian organizers have long worked hand-in-hand to eradicate repressive regimes and policies in both Palestine and the United States. Ben & Jerry’s withdrawing sales on Occupied Palestinian Territory is a step in that direction, yet insufficient.

U.S. Campaign for Palestinian Rights executive director Ahmad Abuznaid said that “for Ben & Jerry’s to fully commit to justice, there must be no scoops left behind under apartheid. Until there are none, we are not done.”