In part seven of this eight-part series, the Supreme Court delivers its verdict in the case of Gravel v. the United States.

This is Part 7 of Consortium News’ multi-part series on the 50th Anniversary of the late Sen. Mike Gravel obtaining the Pentagon Papers from Daniel Ellsberg and the consequences Gravel faced for revealing the top secret documents in Congress, just hours before the Supreme Court decided the case on June 30, 1971.

In Part One, Gravel brought the Papers to Capitol Hill to make them public by reading them into the Congressional Record. In Part Two, Gravel gets the papers from Ellsberg through an intermediary. Part Three tells the story of Gravel’s emotional reading of the Papers. In Part Four, the Supreme Court decision to vacate the government’s prior restraint opens new legal jeopardy. In Part Five,Gravel makes the risky move to have the Pentagon Papers published outside Congress at Beacon Press in Boston. In Part Six Gravel takes his case against Nixon to the U.S. Supreme Court, where Nixon has also sued Gravel. 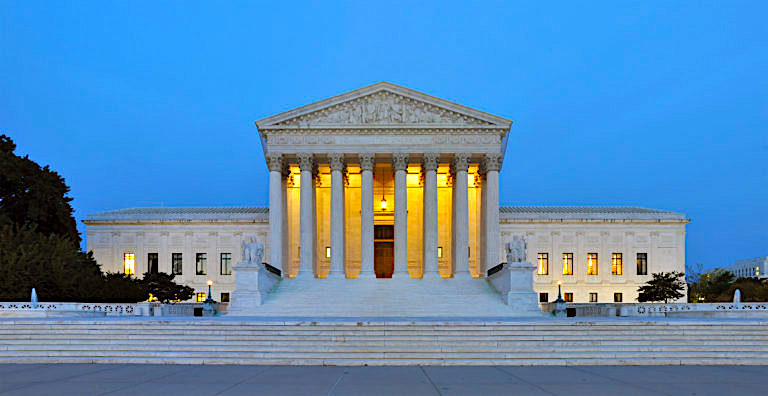 The Court’s ruling in Gravel v. United States and United States v. Gravel came down June 30, 1972, exactly a year from the night I read the Papers into the record. The Court would essentially answer two questions: Was publication by Beacon a legislative act or not? And did Rodberg have to testify. We had maintained that informing constituents is a protected legislative act.

“Private publication by Senator Gravel through the cooperation of Beacon Press was in no way essential to the deliberations of the Senate; nor does questioning as to private publication threaten the integrity or independence of the Senate by impermissibly exposing its deliberations to executive influence. The Senator had conducted his hearings; the record and any report that was forthcoming were available both to his committee and the Senate. Insofar as we are advised, neither Congress nor the full committee ordered or authorized the publication. We cannot but conclude that the Senator’s arrangements with Beacon Press were not part and parcel of the legislative process.”

The real stinger was that the decision also said both Rodberg and I were liable to be criminally indicted.

“While the Speech or Debate Clause recognized speech, voting, and other legislative acts as exempt from liability that might otherwise attach, it does not privilege either Senator or aide to violate an otherwise valid criminal law in preparing for or implementing legislative acts. If republication of these classified papers would be a crime under an Act of Congress, it would not be entitled to immunity under the Speech or Debate Clause.

It also appears that the grand jury was pursuing this very subject in the normal course of a valid investigation. The Speech or Debate Clause does not in our view extend immunity to Rodberg, as a Senator’s aide, from testifying before the grand jury about the arrangement between Senator Gravel and Beacon Press or about his own participation, if any, in the alleged transaction, so long as legislative acts of the Senator are not impugned.”

It was heartening to read the dissenting opinions. Justice Stewart, wrote:

“The Court … today decides …that a Member of Congress may, despite the Speech or Debate Clause, be compelled to testify before a grand jury concerning the sources of information used by him in the performance of his legislative duties, if such an inquiry ‘proves relevant to investigating possible third-party crime.’ In my view, this ruling is highly dubious in view of the basic purpose of the Speech or Debate Clause – ‘to prevent intimidation [of Congressmen] by the executive and accountability before a possibly hostile judiciary.’

Under the Court’s ruling, a Congressman may be subpoenaed by a vindictive Executive to testify about informants who have not committed crimes and who have no knowledge of crime. But even if the Executive had reason to believe that a Member of Congress had knowledge of a specific probable violation of law, it is by no means clear to me that the Executive’s interest in the administration of justice must always override the public interest in having an informed Congress.”

“I would construe the Speech or Debate Clause to insulate Senator Gravel and his aides from inquiry concerning the Pentagon Papers, and Beacon Press from inquiry concerning publication of them, for that publication was but another way of informing the public as to what had gone on in the privacy of the Executive Branch concerning the conception and pursuit of the so-called ‘war’ in Vietnam. As to Senator Gravel’s efforts to publish the Subcommittee record’s contents, wide dissemination of this material as an educational service is as much a part of the Speech or Debate Clause philosophy as mailing under a frank a Senator’s or a Congressman’s speech across the Nation.

If republication of a Senator’s speech in a newspaper carries the privilege, as it doubtless does, then republication of the exhibits introduced at a hearing before Congress must also do so. That means that republication by Beacon Press is within the ambit of the Speech or Debate Clause and that the confidences of the Senator in arranging it are not subject to inquiry ‘in any other Place’ than the Congress.” 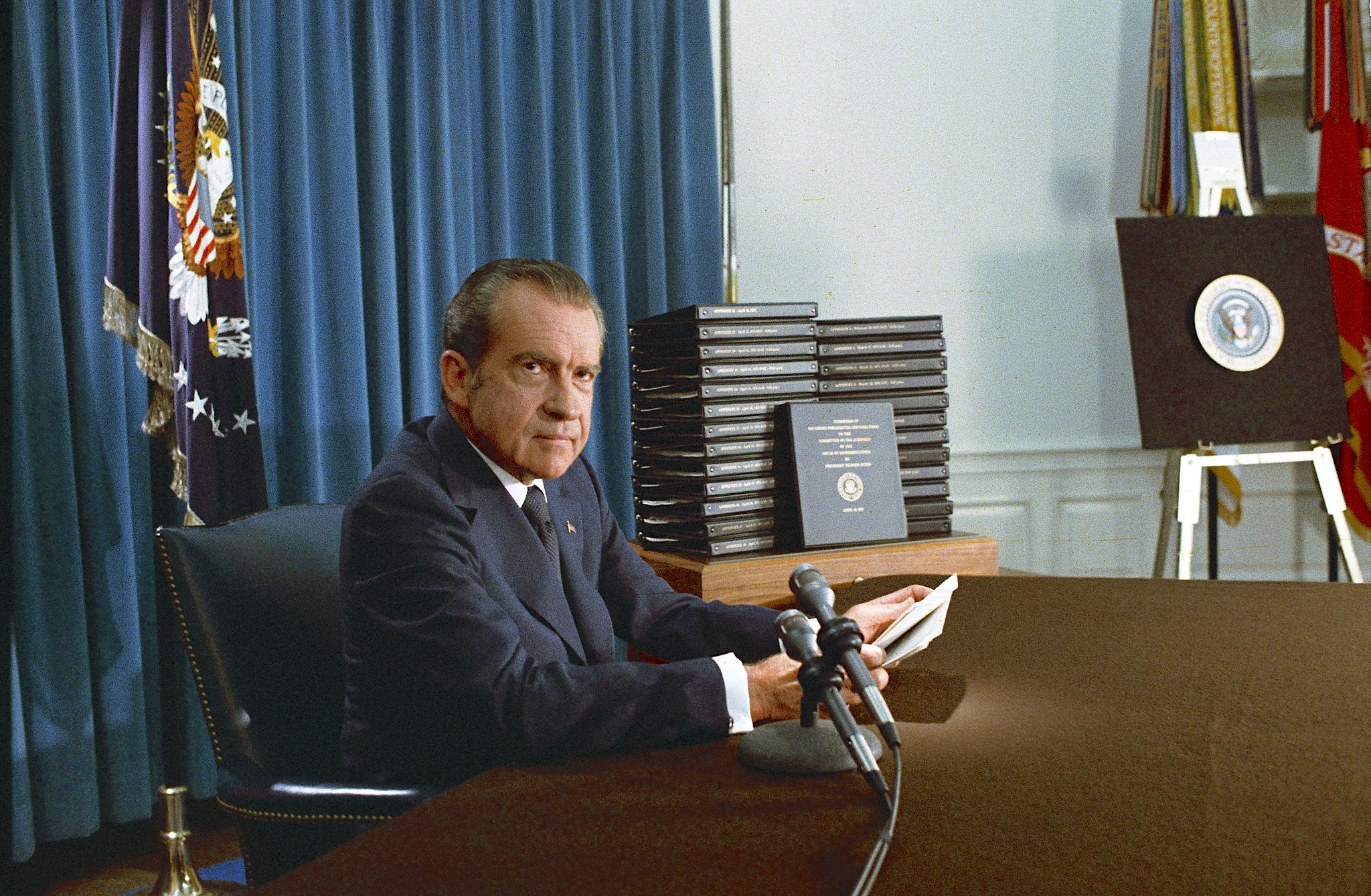 President Nixon with his edited transcripts of the White House Tapes subpoenaed by the Special Prosecutor, during his speech to the Nation on Watergate, April 1974. (Nixon Library)

I lost the case. But all nine justices reaffirmed that under the speech and debate clause I could say whatever I wanted, even read a top-secret document, as long as it was part of a legislative act. No one could question me or my aides about it outside the Capitol. But the majority of five justices essentially said the minute I stepped out of the Capitol grounds onto the street and uttered the same words in an act not related to legislative procedure I could be indicted if it were deemed a crime.

Both Rodberg and I were on the hook.

We were only saved by the gravity of Nixon’s crimes, which finally started coming to light twelve days before the Court’s decision in my case when five burglars were arrested at the Watergate complex. Nixon suddenly had a much bigger problem than criminally prosecuting a sitting Senator and going after his aide. Rodberg was never called to testify and the grand jury in Boston eventually expired without issuing any indictments.

Ellsberg had already been indicted by a separate grand jury in Los Angeles. His trial dragged on for months until May 11, 1973 when the case ended in a mistrial after the judge (who’d been offered a bribe by Nixon of the FBI directorship) learned Nixon’s plumbers—so-called to plug leaks like Ellsberg’s—had broken into Dan’s psychiatrist’s office looking for dirt. They found nothing. Dan and his partner in the great crime of Xeroxing, Anthony Russo, were free.

Griswold later wrote an article saying that he had finally read the Papers and found nothing in them that was harmful to national security. Nixon, in his Supreme Court battle over the White House tapes, actually tried to make use of our argument for indemnity.

Tomorrow: In the concluding installment: the significance of the Supreme Court decision.

2 comments for “Revealing the Pentagon Papers in Congress — 7: The Verdict”