In part two of this multi-part series, Sen. Mike Gravel gets a mysterious phone call from someone saying he had the Pentagon Papers, which Gravel later agreed to accept just blocks from the White House.

This is Part 2 of Consortium News’ multi-part series on the 50th Anniversary of Sen. Mike Gravel obtaining the Pentagon Papers from Daniel Ellsberg and the consequences Gravel faced for revealing the top secret documents in Congress, just hours before the Supreme Court decided the case on June 30, 1971.

In Part One, Gravel brought the Papers to Capitol Hill to make them public by reading them into the Congressional Record. Through a procedural screw-up, Gravel was forced from the Senate floor into the basement of a Senate office building to begin reading the Papers at a subcommittee meeting. In this part, Gravel gets the papers from Ellsberg through an intermediary and is overcome by emotion as he begins reading from them.

The excerpts published here are from the book A Political Odyssey by Sen. Mike Gravel and Joe Lauria (Seven Stories Press). It is Gravel’s story told to and written by Lauria.

Part Two: Getting the Papers

The 7,100-page study, which had been obtained and secretly given to me, detailed in 4,100 pages of analysis–I was missing as many as 3,000 pages of supporting documents–how the federal government had consistently lied to the American people about our military involvement in Vietnam.

They revealed a detailed portrait of an arrogant, authoritarian and secretive leadership, spanning Democratic and Republican administrations from Harry Truman to Lyndon Johnson, irresponsibly leading the nation gradually into a war they knew they could not win.

Among many deceptions exposed over three decades, the Papers showed, for instance, that despite President Lyndon B. Johnson’s public promise that he would not expand the war, he secretly did just that, with bombing raids on Laos and North Vietnam as well as the insertion of U.S. marine combat units, long before the public found out.

The Papers had been prepared as a secret study beginning in June 1967 at the direction of Robert McNamara, then defense secretary. It was to be an internal document telling members of the government themselves, but no one else, the truth about what successive administrations had really been up to in Vietnam since 1940. The study was classified “top secret-sensitive” to mostly cover up the screw-ups and hidden motives.

McNamara had copies of the forty-seven volumes filed in two double-combination locked drawers to prevent them from being leaked. On Friday, June 18, eleven days before I entered the Capitol with the flight bags, I was getting a massage in the Senate gym. It was off limits to all but the initiated, that is, senators. Even staff was barred, but my staffer Joe Rothstein was trying to get in. His message was so urgent that he bribed the guy at the door. It was slid open and he slipped in.

I was having my back rubbed, with my face turned to one side. I opened my eyes and there was Joe’s mug staring back at me. He leaned over the table and whispered into my ear: “Someone has just called and he wants to give you the Pentagon Papers. And he’s gonna call back.”

‘Let’s Get the Son-of-a-Bitch’ 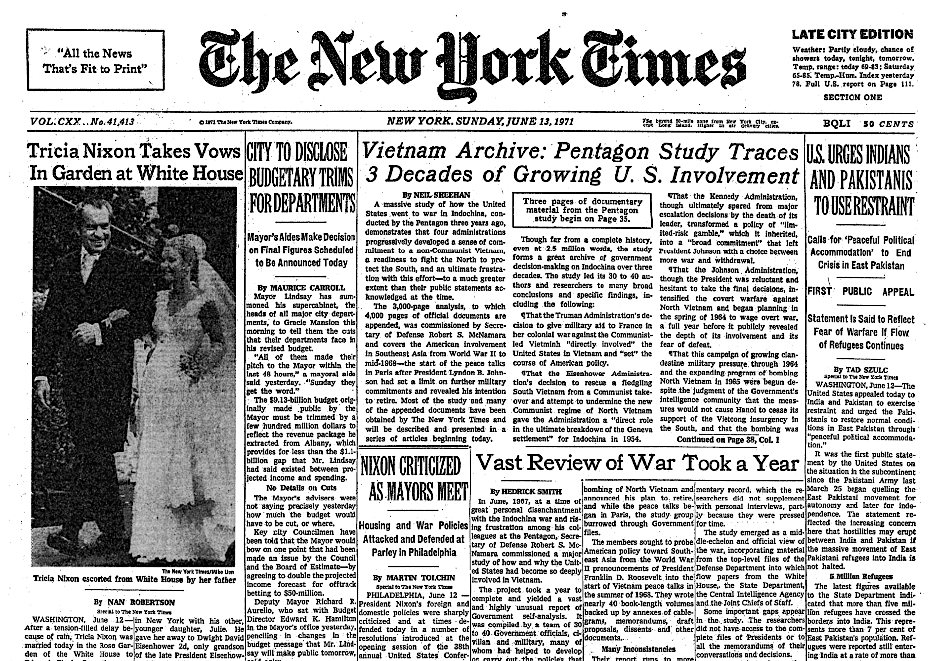 Five days earlier, on Sunday, June 13, The New York Times had published the first installment of the leaked Papers. President Richard M. Nixon was still enjoying the afterglow of the previous day’s Rose Garden wedding for his daughter Tricia when his copy of The New York Times arrived. Though the study stopped with the Johnson administration and might have been seen as a boon to the Republicans, Nixon could not have been pleased.

The war that he had promised to end was not only still going on, but had been expanded, secretly into Cambodia. He feared that other secrets of his prosecution of the war would be leaked. On that Sunday, according to the White House tapes, he told Henry Kissinger, his national security adviser: “People have gotta be put to the torch for this sort of thing … let’s get the son-of-a-bitch [who leaked it] in jail.”

The next day the Justice Department requested the Times stop. The paper refused. So on Tuesday, June 15, after Nixon pounded his Oval Office desk and shouted, “Goddamn it, somebody has got to go to jail!” Attorney General John Mitchell, who would later himself go to jail over Watergate, obtained a temporary restraining order against the Times. Publication stopped the next day.

Just before I went for my massage, two days later, I saw that that morning’s Washington Post had published its first installment. But the government then immediately restrained them, too. Both the Times and the Post were fighting their way to the US Supreme Court. No one knew if the Papers would ever be published again.

I threw on my clothes, dashed back to the office, and sat there waiting for the phone to ring. When it did, a few minutes later, I didn’t have a clue who was on the line. Then the voice said: “Senator, would you read the Pentagon Papers as part of your filibuster against the draft?”

I said: “Yes, and we should hang up right now.”

It would be some time before I knew I was speaking with Daniel Ellsberg, the RAND analyst and Pentagon consultant. He was a member of McNamara’s thirty-six-man Study Task Force that had researched and written the Papers. Ellsberg, in an act of supreme patriotism, had stolen a copy of those classified documents to expose the lies behind American mass murder in Southeast Asia. 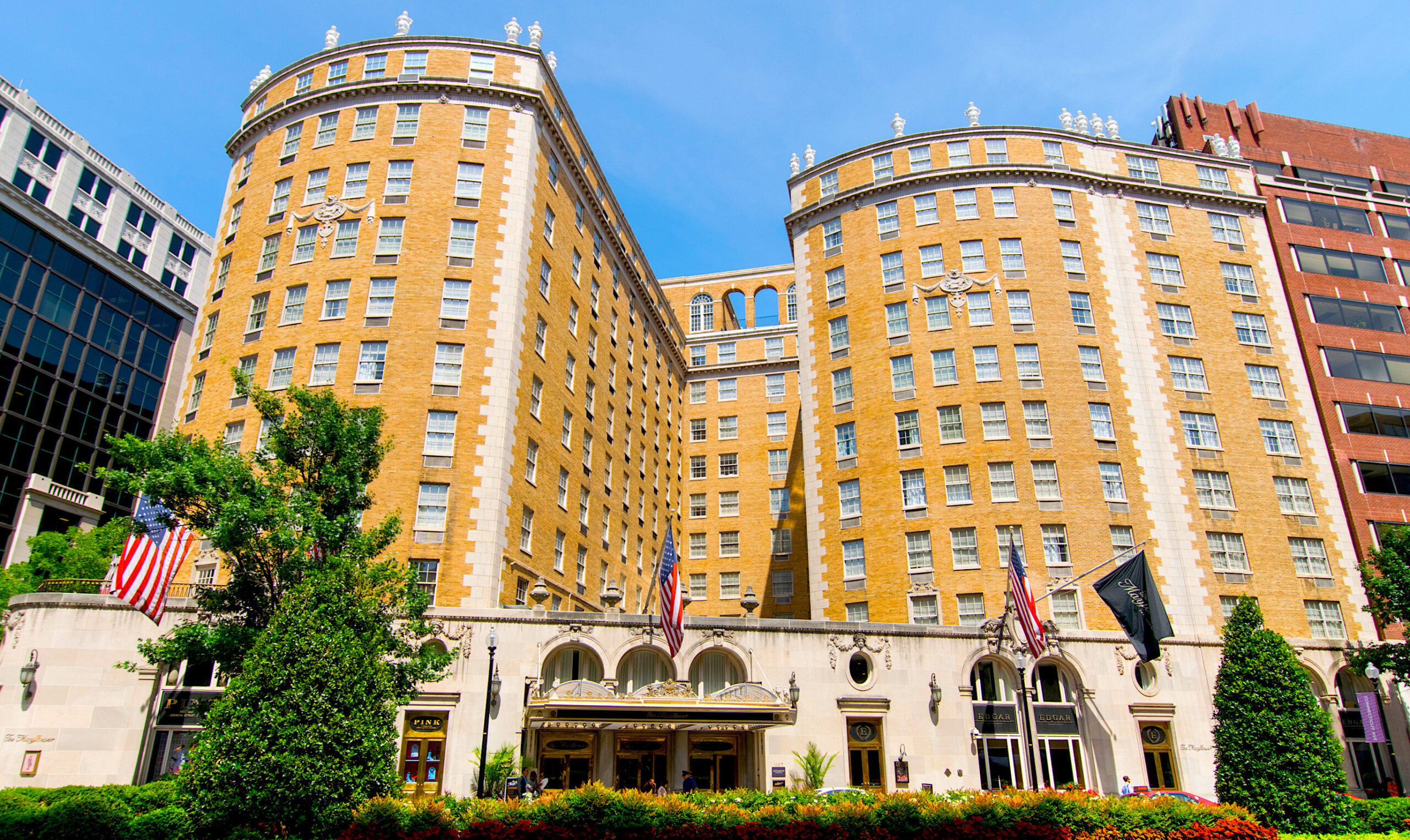 Ellsberg had approached several members of Congress with the offer to make the Papers public by reading them into the Congressional record. Several initially agreed, then considered the consequences, and backed down. One was George McGovern, the South Dakota senator, whose top aides convinced him it would not improve his chances the following year of becoming president.

Every senator fancies himself president, if only for a fleeting moment. I was certain I would be kissing away my chance of getting to the White House if I took the Papers. The FBI was on Ellsberg’s tail. Dan went underground in a Cambridge, bridge, Massachusetts motel, after he watched two federal agents on television knocking on the door of his home on June 17, the day before he called me from the motel.

Ellsberg made arrangements for Ben Bagdikian, an editor at The Washington Post, to get the Papers to me. Bagdikian had flown up to Boston the day before Ellsberg called me and, using code names on the phone, the two of them then met in Bagdikian’s motel room. They took rope from the motel fence, which guests used for their dogs, to fasten the bulging boxes of documents. Bagdikian booked two seats on the flight back to Washington. The boxes sat on the second seat.

The morning of my massage the Post began publishing its excerpts. The paper was then restrained, but challenged it in DC district court on Tuesday, June 22, the day The Boston Globe published excerpts and was immediately restrained. Every time a paper was restrained Ellsberg would leak the Papers to another.

I was getting antsy. It was five days since I was promised the documents by the anonymous voice on the phone. All the newspapers were restrained from publishing and I hadn’t heard again from whomever it was that had phoned. Then I got another call, still not realizing who the hell I was dealing with.

“Godammit are you going to read the Pentagon Papers as part of your filibuster?’ the voice demanded.

Hiding Behind a Column 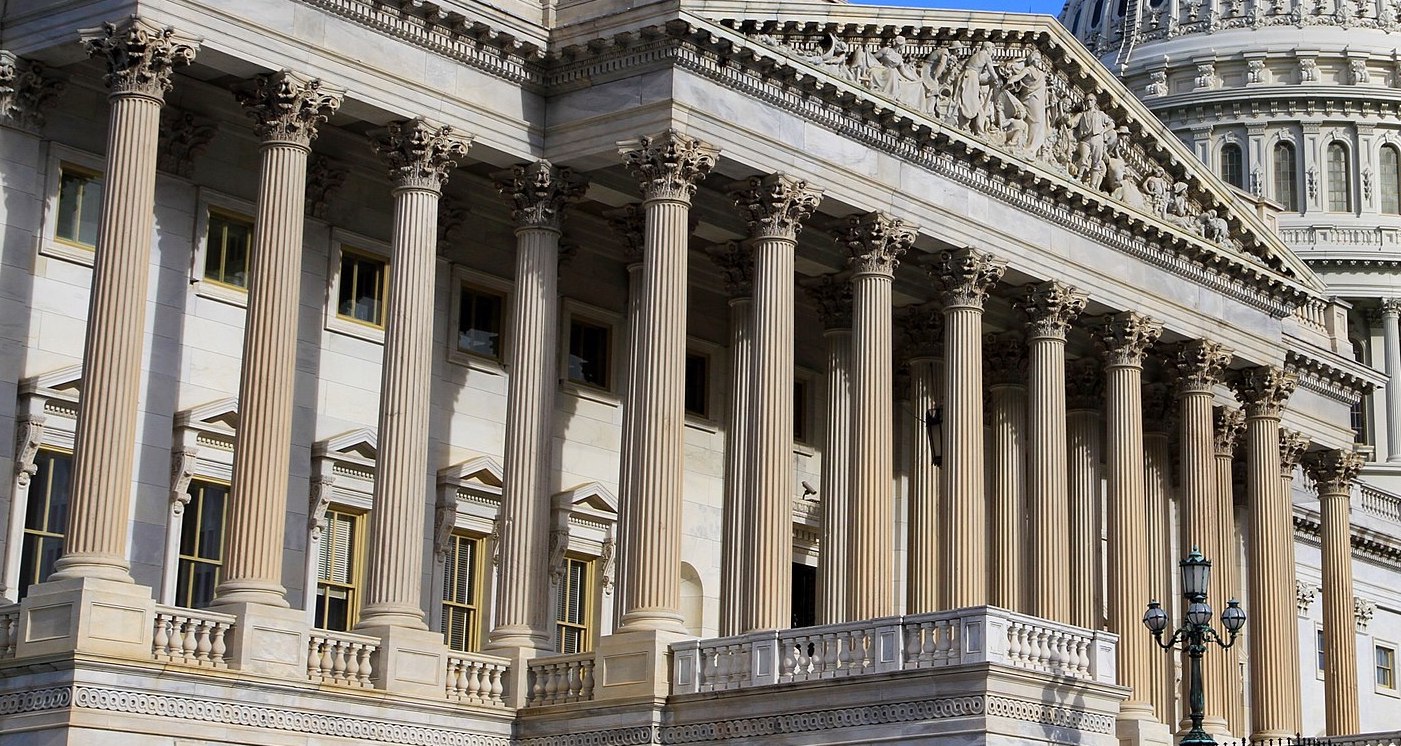 The next day Bagdikian and I finally met at the Capitol to arrange the handover. We were trying to shield ourselves behind one of the Capitol’s pillars when out walked Bob Dole, the Kansas senator. We were not friends, but he spotted me and wanted to talk. Bagdikian stayed behind the marble column.

Ben said later he felt uncomfortable as a journalist giving classified documents to a member of Congress, but that was the condition Ellsberg had set for the Post to publish. Bagdikian had wanted to make the transfer out in the countryside. But I had told him it would be less suspicious in the most conspicuous place in Washington.

On Thursday, June 24 at midnight, I drove my car next to his parked under the marquee of the Mayflower Hotel, just blocks from Nixon’s bedroom. I opened my trunk and he opened his and I grabbed the boxes and put them in my car. I sped off, parked the car in the street, and walked back to the hotel. Bagdikian and I then had a drink, like nothing had happened.

Later I drove home and put the boxes under my bed. I slept that night on what may have been the most damning evidence against the U.S. government ever committed to paper. Over the next five days my staff and I barely slept as we read the 4,000 pages and sliced the words “Top Secret-Sensitive” from the top of every page. I had to make a decision, based on the context, which names should be censored.

During those five days Walter Cronkite interviewed Ellsberg on TV from a secret location. A warrant for Ellsberg’s arrest was issued and the Supreme Court heard the Times and Post argument against prior restraint. The day before I entered the Capitol with the flight bags, Ellsberg turned himself in to Federal Court in Boston. He was looking at 115 years in jail under Woodrow Wilson’s 1917 Espionage Act for the felony of leaking classified documents to the press.

They didn’t know yet that he’d also given a copy to me.

Tomorrow: Gravel reads the Pentagon Papers into the Congressional Record

Watch Gravel and Ellsberg discussing these events in 2018:

Mike Gravel served in the U.S. Senate for two terms representing Alaska from 1969 to 1981. In his second year in the Senate Gravel publicly released the Pentagon Papers at time when newspaper publication had been shut down. Gravel is a fierce opponent of U.S. militarism and ran for the Democratic Party nomination for president in 2008 and 2020.

5 comments for “Revealing the Pentagon Papers in Congress — 2: Getting the Papers”