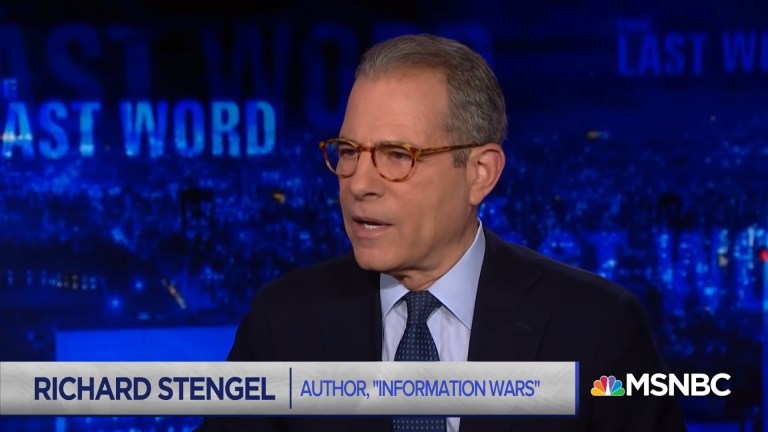 Richard Stengel, the top state media appointee for U.S.  President-elect Joe Biden’s transition team, has enthusiastically defended the use of propaganda against Americans.

“My old job at the State Department was what people used to joke as the chief propagandist,” Stengel said in 2018. “I’m not against propaganda. Every country does it, and they have to do it to their own population. And I don’t necessarily think it’s that awful.”

One is Richard Stengel, self described former “Chief Propagandist” and supporter of domestic US propaganda pic.twitter.com/pNv1opsKBK https://t.co/LyZCxZaADi

Richard “Rick” Stengel was the longest serving under-secretary of state for public diplomacy and public affairs in U.S.  history.

At the State Department under President Barack Obama, Stengel boasted that he “started the only entity in government, non-classified entity, that combated Russian disinformation.” That institution was known as the Global Engagement Center, and it amounted to a massive vehicle for advancing U.S.  government propaganda around the world.

A committed crusader in what he openly describes as a global “information war,” Stengel has proudly proclaimed his dedication to the carefully management of the public’s access to information.

Stengel outlined his worldview in a book he published this June, entitled Information Wars: How We Lost the Global Battle Against Disinformation and What We Can Do About It.

Stengel has proposed “rethinking” the First Amendment that guarantees the freedom of speech and press. In 2018, he stated, “Having once been almost a First Amendment absolutist, I have really moved my position on it, because I just think for practical reasons in society, we have to kind of rethink some of those things.”

The head of the Joe Biden transition team for state media @USAGMgov, Richard @Stengel, called himself the “chief propagandist” and advocated using propaganda against your “own population.”

In this 2018 video he also calls to "rethink" the First Amendment.https://t.co/Yhbyd2UsME pic.twitter.com/7PNllutRYM

The Biden transition team’s selection of a censorial info-warrior for its top state media position comes as a concerted suppression campaign takes hold on social media. The wave of online censorship has been overseen by U.S.  intelligence agencies, the State Department and Silicon Valley corporations that maintain multibillion-dollar contracts with the U.S.  government.

As the state-backed censorship dragnet expands, independent media outlets increasingly find themselves in the crosshairs. In the past year, social-media platforms have purged hundreds of accounts of foreign news publications, journalists, activists and government officials from countries targeted by the United States for regime change.

Stengel’s appointment appears to be the clearest signal of a coming escalation by the Biden administration of the censorship and suppression of online media that is seen to threaten U.S.  imperatives abroad. 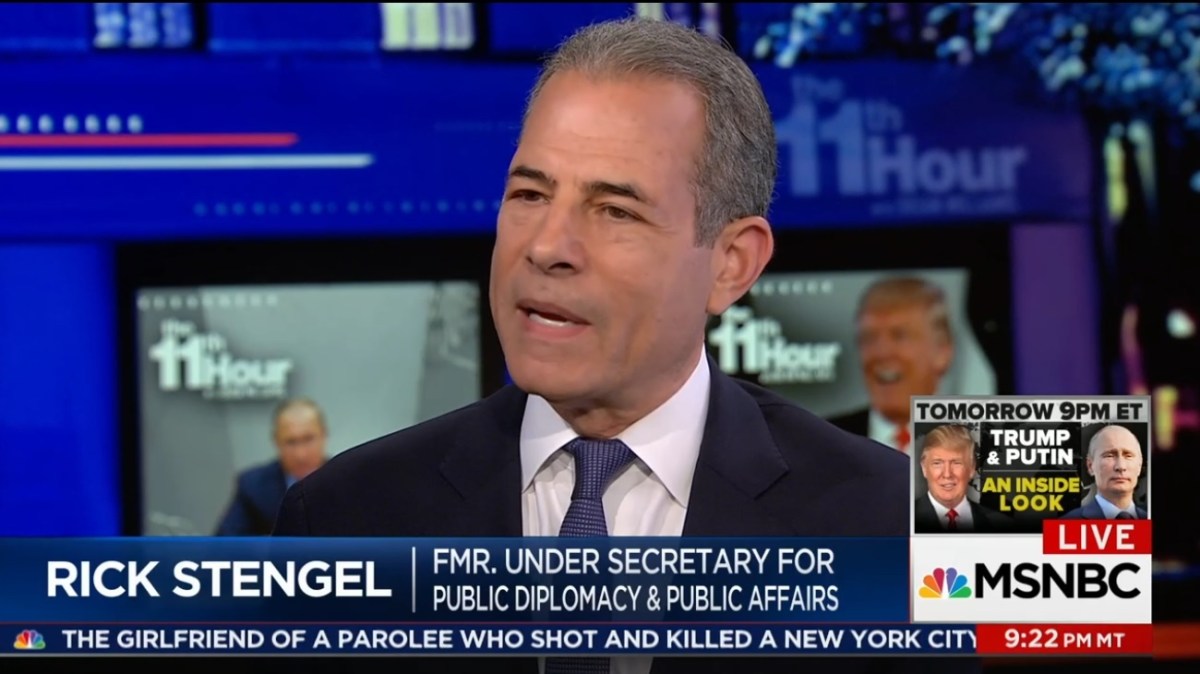 Before being appointed as the U.S.  State Department’s “chief propagandist” in 2013, Richard Stengel was a managing editor of TIME Magazine.

In the Obama administration, Stengel not only created the Global Engagement Center propaganda vehicle; he also boasted that he “led the creation of English for All, a government-wide effort to promote the teaching of English around the world.”

After leaving the State Department in 2016, Stengel became a strategic advisor to Snap Inc., the company that runs the social media apps Snapchat and Bitmoji.

Stengel also found time for a fellowship at the Atlantic Council, a think tank closely linked to NATO and the Biden camp which has received funding from the U.S.  government, Britain, the European Union and NATO itself, along with a host of Western weapons manufacturers, fossil fuel corporations, Gulf monarchies and Big Tech juggernauts.

Stengel worked closely with the Atlantic Council’s Digital Forensic Research Lab, a dubious organization that has fueled efforts to censor independent media outlets in the name of fighting “disinformation.”

But Stengel is perhaps most well known as a regular political analyst on MSNBC in the Donald Trump era. On the network, he fueled Russiagate conspiracy theories, portraying the Republican president as a useful idiot of Russia and claiming Trump had a “one-sided bromance” with Vladimir Putin.

Stengel left MSNBC this month to join Biden’s presidential transition. The campaign announced that he was tapped to lead the Biden-Harris agency review team for the United States Agency for Global Media (USAGM).

Agency review teams are an integral part of the transition process, responsible for evaluating the operations of federal agencies.

Our teams are composed of diverse experts with deep policy expertise, ready to ensure we're prepared to lead on Day One.https://t.co/2gY1E0Ey5k

USAGM is a state media propaganda organization that has its origins in a Cold War vehicle created by the CIA to spread disinformation against the Soviet Union and communist China. (The agency was previously called the Broadcasting Board of Governors, or BBG, until it rebranded in 2018.)

USAGM states on its website that its most important mission is to “Be consistent with the broad foreign policy objectives of the United States.”

An agency shakeup this year produced revelations that USAGM provided clandestine assistance to separatist activists during the protests that consumed Hong Kong in 2019. The program earmarked secure communications assistance for protesters and $2 million in “rapid response” payouts for anti-China activists.

Ironic allegations given the US Agency for Global Media – the parent of @VOANews – was just exposed for earmarking $2 million to fuel Hong Kong protests & provide protesters with “secure communications apps.”

Just imagine the reaction if @CGTNOfficial did this inside the US. https://t.co/W5BERm2yhD

When Richard Stengel referred to himself as the State Department’s “chief propagandist,” advocated the use of propaganda against the American people, and proposed to “rethink” the First Amendment, he was participating in a May 3, 2018 panel discussion at the Council on Foreign Relations (CFR).

During the CFR event, titled “Political Disruptions: Combating Disinformation and Fake News,” Stengel hyped up the threat of supposed “Russian disinformation,” a vague term that is increasingly used as an empty signifier for any narrative that offends the sensibilities of Washington’s foreign policy establishment.

Stengel stated that he was “obsessed with” fighting “disinformation,” and made it clear he has a particular obsession with Moscow, accusing “the Russians” of engaging in “full spectrum” disinformation.

Joining him on stage was political scientist Kelly M. Greenhill, who mourned that alternative media platforms publish “things that seem like they could be true… that’s the sphere where it’s particularly difficult to debunk them… it’s this gray region, this gray zone, where it’s not traditional disinformation, but a combination of misinformation and play on rumors, conspiracy theories, sort of gray propaganda, that’s where I think the nub or the crux of the problem lies.”

Stengel approved, adding, “By the way those terms, the gray zone, are all from Russian active measures, that they’ve been doing for a million years.”

The panelists made no effort to hide their disdain for independent and foreign media outlets. Stengel stated clearly that a “news cartel” of mainstream corporate media outlets had long dominated U.S. society, but he bemoaned that those “cartels don’t have hegemony like they used to.”

Stengel made it clear that his mission is to counter the alternative perspectives given a voice by foreign media platforms that challenge the U.S.-dominated media landscape.

“The bad actors use journalistic objectivity against us. And the Russians in particular are smart about this,” Stengel grumbled.

He singled out Russia’s state-funded media network, RT, lamenting that “Vladimir Putin, when they launched Russia Today, said it was an antidote to the American English hegemony over the world media system. That’s how people saw it.”

Ben Decker, a research fellow at the Misinformation Project at the Harvard Kennedy School of Government, lamented that “RT is invading every weekly finance media space.”

But Decker was cheered by the proliferation of U.S.  oligarchs committed to retaking control of the narrative. “In America and across the world,” he stated, “the donor community is very eager to address this problem, and very eager to work with communities of researchers, academics, journalists, etc. to target this problem.”

“I think that there is an appetite to solve this from the top down,” he continued, urging the many academics in the audience “to apply for grant money” in order to fight this Russian “disinformation.”

The CFR panel culminated with an African audience member rising from the crowd and confronting Stengel: “Because what is happening in America is what the United States flipped on the Global South and in the Third World, which we lived with, for many, many years, in terms of a master narrative that was and still is propaganda,” the man declared.

Rather than respond, Stengel rudely ignored the question and made his way hurriedly for the exit: “You know what, I hate last questions. Don’t you? I never, I usually just want to end something before the last question.”

The video of the revealing confrontation caused such a furor that CFR’s YouTube account disabled comments and made the video unlisted. It cannot be found in a search on Google or YouTube; it can only be found with the direct link.

The video of the full discussion is embedded below: