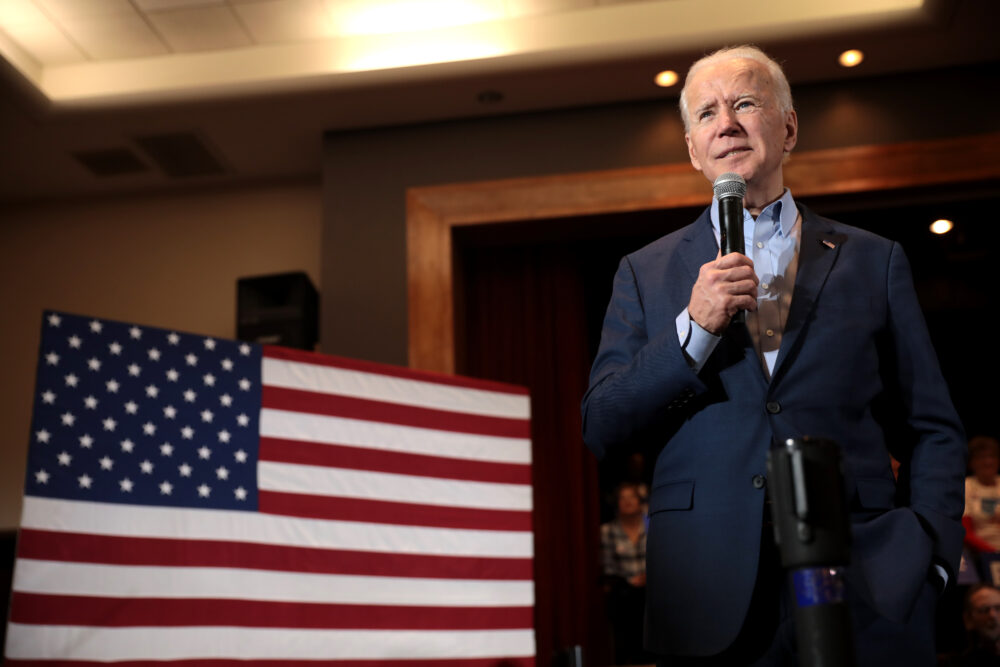 While Former Vice President Joe Biden has begun to lay out changes he plans to make immediately upon taking office, President Donald Trump has vowed to continue waging a legal battle to prove that he won instead.

Biden aides have revealed that he plans a series of executive orders upon assuming power that would reverse numerous Trump policies, The Washington Post reported.  Biden will have the U.S. rejoin the World Health Organization and the Paris climate accord, lift the ban on travel from numerous Muslim countries and he’ll put back in place the Dreamers program, that allows children of undocumented aliens to remain in the United States.

Biden said in his victory speech on Saturday that he would set up a coronavirus task force with top scientists to presumably reverse Trump’s policy on the pandemic.  Trump’s handling of the health emergency was cited in opinion polls as the issue most on Americans’ minds.

Meanwhile, Trump has not given up, tweeting on Sunday:

Lawyers for the Trump team have begun legal action in swing states. In Michigan a legislative committee began a probe into allegations of irregularities in vote counting.  The Republican majority committee is demanding documents from the state’s Bureau of Elections. While counting continues in various states, the Trump team will need access to ballots in order to make a case of fraud.

Saturday–Joe Biden has won the White House after taking the state of Pennsylvania, CNN, NBC News and the Associated Press have projected.  The New York Times has also called it for Biden:

I WON THIS ELECTION, BY A LOT!

Trump issued a statement shortly after the media called the election. “The simple fact is this election is far from over,” President Donald Trump said. “We all know why Joe Biden is rushing to falsely pose as the winner, and why his media allies are trying so hard to help him: they don’t want the truth to be exposed.”

Friday– Joe Biden has taken the lead in the state of Pennsylvania putting him in position to win the presidency.

With 95 percent of the votes counted, Biden now leads Trump by 5,587 votes. If Biden holds on, he’d win the state’s 20 electoral votes, giving him 273 and the presidency.

Joe Biden is zeroing in on the presidency as he takes the lead in Georgia and is within a few thousand votes of Donald Trump in Pennsylvania as the U.S. east coast woke up on Friday morning.

A win in Pennsylvania with its 20 electoral votes would win it for Biden. At 8 a.m. EST he trailed Trump by 18,049 votes with 95 percent of the votes counted.  A Biden victory in Georgia would deprive Trump of enough electoral votes left on the board to stay in the White House. Biden leads by 1,096 votes in Georgia with 98 percent counted.

Because of razor thin margins in those two states and others, like Wisconsin, legal challenges and recounts will follow with a Trump concession speech probably weeks away.

Some Republican congressional leaders have distanced themselves from Trump’s remarks on Thursday, while others, like Sens. Ted Cruz and Lindsey Graham, have stuck with Trump, fearful of alienating his still energized base.

Thursday—Donald Trump’s lead over Joe Biden in Pennsylvania has narrowed to just 64,266 votes with 98 percent of the vote counted. Six hours ago Trump led by 116,000 votes, as the mail-in ballot count continues. On Wednesday morning, Trump had a 600,000 vote lead. If Biden pulls it out in the state, he would win the presidency with 270 electoral college votes.

Donald Trump appeared in the White House briefing room just before 7 p.m. to say he has won the election and it is being stolen from him.

Trump said there had been interference in the election by “big media, big money and big tech. We won with historic numbers.” Trump said the wrong opinion polls that had Biden winning by a landslide was evidence of “suppression.”

“Pollsters got it wrong. There was no blue wave. It was done for suppression reasons. There has been a big red wave.”

Again, Trump blamed mail-in ballots. “Democratic officials never believed they could win honestly, that’s why they mailed out tens of millions of unsolicited ballots without verification,” Trump said. “It’s totally unprecedented. There was no requirement to have signatures or to determine whether voters were eligible. We have information coming in litigation.” Trump said that ultimately the Supreme Court, with a 6-3 conservative majority, would decide the election.

Trump had told his supporters in the middle of pandemic not to vote by mail, so it is not surprising that most of those votes are Democratic. “I said mail in ballots would be a disaster,” he said.

Trump said there were “secret count rooms” and that Republican observers had been kept out the counting areas in Detroit.  He said they were also blocked in Philadelphia, but that the Republicans won litigation to get the observers in. In fact the lawsuit was not about access but about how close they could position themselves to the counters.

The Pennsylvania secretary of state said Thursday that the state’s 20 electoral college votes should be determined by the end of the day, which could deliver the White House to former Vice President Joe Biden.

Kathy Boockvar told CNN that there are still 550,000 votes, about 100,000 in Philadelphia, to be counted, all of them mail-in ballots.

Biden has so far won 253 electoral college votes to Trump’s 213.  Pennsylvania’s 20 electoral votes would give Biden 273. A candidate needs 270 to win the presidency.

As of 2 pm Thursday, Trump still leads Biden in the Keystone State by 50.2 percent to 48.5 percent, with 92 percent of the vote counted.  That is a difference of about 116,000 votes in Trump’s favor. However that lead is threatened by the outstanding mail-in ballots, which have heavily favored Biden.

Earlier in the day the Biden camp said it did not expect a winner to be declared on Thursday.  That was before Boockvar spoke.

Nevada officials said final results from that state, with its six electoral votes, would not be known until the weekend.  Biden leads in Nevada by 49.4 percent to 48.5 percent with 89 percent counted.

Biden also leads in Arizona by two percentage points with 86 percent counted.  If Biden holds on in both states, Nevada’s six electoral votes and Arizona’s 11 could also put him over the top.

Meanwhile Trump has been furiously tweeting from the White House, declaring “STOP THE FRAUD!” and “STOP THE COUNT!”

He also tweeted: “All of the recent Biden claimed States will be legally challenged by us for Voter Fraud and State Election Fraud. Plenty of proof – just check out the Media. WE WILL WIN! America First!”

Even if Biden were to win Pennsylvania today and declare victory, Trump is unlikely to concede anytime soon, allowing his legal challenges and recounts to proceed. The Trump campaign has already demanded a recount in Wisconsin, with counting continuing there.

The large number of mail-in ballots have come in the midst of the pandemic. The Democrats urged their voters not to risk going to the polls and vote by mail instead. Trump, who has been denying the severity of the virus, did not encourage mail-in voting.

Instead, his administration tried to cut funding to the Post Office to make it harder for Democrats to vote. The president has been railing against voting by mail for months, alleging that it is subject to fraud.

When he saw that he was leading in all swing states on Tuesday night, he declared victory and demanded the counting be stopped, knowing that his leads were threatened once the mailed-in ballots were counted.

Biden, who is trailing in Pennsylvania, North Carolina and Georgia, could lose those states and still win the presidency. Biden spoke in Delaware today and said “We are not declaring victory, but we believe we will win.”

Wednesday–President Donald Trump on Wednesday declared premature victory and said he would go to the US Supreme Court to stop the counting so that he would win key electoral states he is leading in, giving him the presidency.

Speaking from the White House after 2 a.m. Washington time, Trump said there had been a “major fraud” committed on the American people because “millions and millions” of mail in ballots were allowed. “Frankly, we did win this election,” he declared.

In states where Biden trails, mail-in ballots are still being counted. Democrats are dominating the mail-in vote. There are about 1.4 million votes yet to be counted in Pennsylvania alone.

Vice President Mike Pence, who spoke after Trump, appeared to ignore what the president said, calling for the votes to be counted. There is no way for Trump to go directly to the U.S. Supreme Court to stop counting, or even for a recount. These are state matters dealt with by state courts, which can hear challenges to the counting.

Throughout his presidency Trump has repeatedly made wild statements, both spoken, and on Twitter, which he quickly reverses. It has made it hard to often take him seriously. It remains to be seen if Trump continues to pursue his line of “major fraud” because of the “millions of ballots” sent by mail that will take time to count.

If an authoritarian leader does not have the people around him to implement his orders, he is not a dictator, but an isolated fabulist.

Trump has railed against mail-in ballots for months when it became clear that these would favor Biden. Trump wants the counting to stop so he can be declared the winner of those battleground states that he leads in, which would give him at least 270 electoral votes.

If those mail-in ballots tip at least some of these states to Biden, he the former vice president could win. It would remain to be seen how Trump would react to that.

Trump had earlier tweeted that he won the election and that “they” are trying to steal it. Former Green Party presidential candidate Jill Stein told CN Live! Thursday night that that was a dangerous signal to violent Trump supporters.

Former Vice President Joe Biden spoke about two hours earlier to his supporters, saying he is “feeling good,” about winning. “It ain’t over until all the ballots are counted.” About 1.4 million mail-in votes have not yet been counted in Pennsylvania.