WATCH: Activists and journalists gathered in front of the Brazilian Embassy in DC on Thursday to sound the alarm about the threat to press freedom emanating from the attempt to charge Glenn Greenwald for practicing journalism.

Journalist Glenn Greenwald has been accused in Brazil of taking part in the hacking of text messages that revealed collusion between a judge and prosecutors to jail former President Luiz Inácio Lula da Silva in the Car Wash investigation, preventing him from running for a new term in last year’s Brazilian election.

With Lula behind bars Jair Bolsonaro was elected. He promptly appointed the colluding judge, Sergio Moro, as minister of justice. The entire scheme was blown up by Greenwald and his staff at The Intercept Brasil. 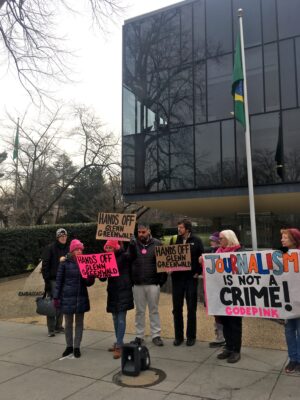 It is Moro’s justice ministry that has leveled the criminal complaint against Greenwald in an attempt to have him punished for uncovering Bolsonaro’s corrupt path to the presidency.

The proposed charges are shockingly similar to those unleashed on WikiLeaks publisher Julian Assange in his first indictment in which he is accused of helping Chelsea Manning hack into a government database that Manning had legal access to as a U.S. intelligence analyst with the highest security clearance. What Assange did was encourage Manning to get more documents and he helped her try to hide her identity.

According to Robert Parry, the late founder of this site, those are essential activities of investigative journalism. In an article published ten years ago, “All Investigative Journalists Do What Julian Assange Did,” Parry went a step further. He said he encouraged his sources to break the law by illegally obtaining documents to prevent or reveal a greater crime of the state.

It is up to a judge to determine if Greenwald will be formally charged. If the judge listens to the Brazilian federal police Greenwald will walk free. That is because the police already investigated Greenwald and determined he broke no laws. They even said he took precautions not to break the law. As in the Assange case, this is an instance of criminalizing routine journalistic activity to punish reporters who have threatened powerful people by revealing their corruption.

Here are scenes of the protest, which include Code Pink activist Medea Benjamin, Sam Husseini from the Institute for Public Accuracy and Joe Lauria, editor-in-chief of Consortium News.

5 comments for “Washington Protest at Brazilian Embassy over Greenwald”