On Monday, Jan. 13, WikiLeaks publisher Julian Assange appeared at Westminster Magistrates Court in his fight against extradition to the U.S. The administrative hearing concerned Assange’s lack of access to legal counsel, making it difficult for him to adequately prepare for his case. His lawyer, Gareth Peirce, told the judge that U.K. prison is blocking her client from reviewing key evidence. She has only had two hours with him since his last hearing in December.

Injustice is woven into the U.K. legal system. This procedural hearing, which was originally scheduled for Tuesday of that week, was moved earlier by a day at the last minute. This gave Assange’s defense team only one hour with him, rather than the full day they had expected.

Assange has been charged with 17 counts of espionage for publishing the government’s documents exposing U.S. war crimes in Iraq and Afghanistan and torture in Guantanamo Bay. The indictment of Assange is recognized by many free- speech groups as the most important press0freedom case of our time. Yet, with mainstream media blackout and utter silence of political leaders on this important issue, criminalization of journalism goes on without much of the public being aware of it.

America Betrays Its Own Ideals

What is this prosecution of Assange really about? Why do Americans need to be concerned about this Australian journalist who is charged with espionage by our government? WikiLeaks has radically changed the media landscape. By publishing truthful information about the United States, the organization came head-to-head with the Pentagon and the CIA. Yet, the effectiveness of his fearless journalism is not the only reason Assange became a political prisoner; designated as an enemy of the state and psychologically tortured inside Belmarsh prison (once known as the U.K.’s Guantanamo Bay).

WikiLeaks’ 2010 publication of the Collateral Murder video shed light on a hidden history of the United States. Raw footage of a U.S. Army attack in the suburb of Iraq, carried out under the banner of “Operation Iraqi Freedom,” recovered lost pages of history. The unfolding imagery seen from the view of an Apache helicopter reached back to a time before the invasion of Iraq, before 9/11, and even before the nation’s addiction to oil began; to the genocide of the natives in the warfare led by American guns and cannons.

Memories retrieved let people see America’s betrayal of its own ideals, manifested in the exclusion of some from the premise of equality of all people, which was stated as self-evident truth in its founding document.

Carrying on the Struggles of the Past 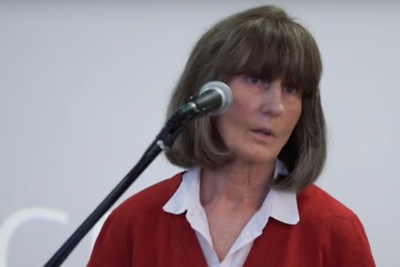 Gareth Peirce, a lawyer for Julian Assange, in 2016. (YouTube)

Assange, through his work with WikiLeaks, not only informed the public about America’s troubled beginning, but also provided a mechanism for people to redeem an unaccounted past.Throughout history, from the defiance of abolitionists to the women’s suffrage movement, demands for equality came from below. Ordinary people pushed boundaries of the Constitution to make ideals in the Declaration of Independence legally binding.

The ’60s brought political upheaval, and resistance came full force. Individuals like Rosa Parks, Martin Luther King Jr., and Malcolm X, through their united words and actions, inspired black people to mobilize in their fight to achieve civil rights. Mario Savio, the spokesperson for the free speech movement, instigated the nation-wide student protests against government censorship and restriction of free speech on campus.

In this digital age, Assange, who has won numerous awards for journalism, found a way to help a new generation of Americans carry on this struggle of the past. He did this by innovating a new form of journalism online that is run on free software.

Jérémie Zimmermann, a French computer science engineer and co-founder of the most prominent organization in Europe that defends online freedoms, described free software as a social contract and noted that it is a way to organize a public sphere.

Zimmermann delved deeper to reveal that the drive behind free software is love. He described how, “love is about understanding, understanding of flaws of others and of ourselves.” He then spoke how free software is, “a joyful practice with a role for everyone where we learn collectively about our flaws, where we learn to fail and love our failures, and learn about our failures.”

With WikiLeaks as a project of free software, Assange brought love to the Internet that could transform it into becoming a powerful tool for democracy. This love shared among the youth who grew up on the Internet fueled acts of civil disobedience. The former U.S. Army intelligence analyst, Chelsea Manning, lit the spark of conscience, by releasing the largest trove of state secrets in U.S. history. This source behind WikiLeaks disclosure of the George W. Bush Era’s war crimes remains incarcerated for refusing to cooperate at a grand jury targeting the publisher.

From Manning, to Jeremy Hammond, to Edward Snowden, waves of whistleblowers created an insurgency of contagious courage. People from inside institutions, who want change, came forward to defy the unjust laws, in order to uphold the high ideals. This kick-started an open experiment of democracy, creating a network that seeks to understand flaws, collaborates to amend them, and invites all to participate in envisioning a new society.

With this platform of democracy that Assange helped to launch, what did he try to do? Assange came to see how ordinary people are made passive; being tossed around and excluded from vital decision-making processes. He decided to side with those who are oppressed, wanting to help people recognize their own significance.

While being held in solitary confinement in a maximum high security prison in London, Assange was awarded the 2019 Dignity Prize for his support of the Catalan peoples’ struggle for independence and their fight against Spanish police brutality. Just as he aspired to walk alongside Catalans on their path for self-determination, from behind the computer screen inside a tiny room in the Ecuadorian embassy, where his every move was monitored by the CIA, he also cared about the destiny of America and what it was becoming.

After Monday’s hearing, while being transported from Westminster Magistrates Court, Assange looked out into a crowd from inside a police van and acknowledged their support. A man shouted loudly, “Stay strong, you will be free.” Assange sacrificed his liberty so that we could all be free. By releasing documents, WikiLeaks set a frozen history in motion. History is now happening, and Assange’s plight is our story, in which each person has a significant role to play.

Only through each of us choosing freely to respond to this love for the world that Assange has demonstrated, may we be able to claim our own history. Only through love for one another that allows us to see perfection in our flaws, and find beauty in messes and our failures, can we begin to work to correct errors of our leaders — and together to end this egregious miscarriage of justice.

Nozomi Hayase, Ph.D., is an essayist and the author of “WikiLeaks, the Global Fourth Estate: History Is Happening.” Follow her on Twitter: @nozomimagine

11 comments for “American Ideals at Heart of Assange Extradition Case”