Taking on water from revealed FBI conflicts of interest, the foundering Russia-gate probe – and its mainstream media promoters – are resorting to insults against people who note the listing ship, Robert Parry wrote two years ago today.

The very issues being debated in the Senate Judiciary Committee hearing this week regarding FBI misconduct in starting an investigation into a presidential campaign was dissected two years ago to the day, on Dec. 13, 2017 by Consortium News founding editor Robert Parry, who was way ahead of this story.

The disclosure of fiercely anti-Trump text messages between two romantically involved senior FBI officials who played key roles in the early Russia-gate inquiry has turned the supposed Russian-election-meddling “scandal” into its own scandal, by providing evidence that some government investigators saw it as their duty to block or destroy Donald Trump’s presidency. 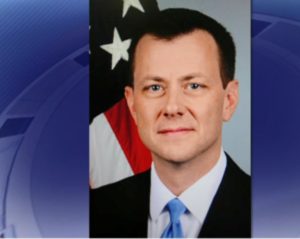 Peter Strzok was  a deputy assistant director of the FBI, the second in command of counterintelligence.

As much as the U.S. mainstream media has mocked the idea that an American “deep state” exists and that it has maneuvered to remove Trump from office, the text messages between senior FBI counterintelligence official Peter Strzok and senior FBI lawyer Lisa Page reveal how two high-ranking members of the government’s intelligence/legal bureaucracy saw their role as protecting the United States from an election that might elevate to the presidency someone as unfit as Trump.

In one Aug. 6, 2016 text exchange, Page told Strzok: “Maybe you’re meant to stay where you are because you’re meant to protect the country from that menace.” At the end of that text, she sent Strzok a link to a David Brooks column in The New York Times, which concludes with the clarion call: “There comes a time when neutrality and laying low become dishonorable. If you’re not in revolt, you’re in cahoots. When this period and your name are mentioned, decades hence, your grandkids will look away in shame.”

Apparently after reading that stirring advice, Strzok replied, “And of course I’ll try and approach it that way. I just know it will be tough at times. I can protect our country at many levels, not sure if that helps.”

At a House Judiciary Committee hearing on Wednesday, Rep. Jim Jordan, R-Ohio, criticized Strzok’s boast that “I can protect our country at many levels.” Jordan said: “This guy thought he was super-agent James Bond at the FBI [deciding] there’s no way we can let the American people make Donald Trump the next president.”

In the text messages, Strzok also expressed visceral contempt for working-class Trump voters, for instance, writing on Aug. 26, 2016, “Just went to a southern Virginia Walmart. I could SMELL the Trump support. … it’s scary real down here.”

Another text message suggested that other senior government officials – alarmed at the possibility of a Trump presidency – joined the discussion. In an apparent reference to an August 2016 meeting with FBI Deputy Director Andrew McCabe, Strzok wrote to Page on Aug. 15, 2016, “I want to believe the path you threw out for consideration in Andy’s office — that there’s no way he gets elected — but I’m afraid we can’t take that risk.”

It’s unclear what strategy these FBI officials were contemplating to ensure Trump’s defeat, but the comments mesh with what an intelligence source told me after the 2016 election, that there was a plan among senior Obama administration officials to use the allegations about Russian meddling to block Trump’s momentum with the voters and — if elected — to persuade members of the Electoral College to deny Trump a majority of votes and thus throw the selection of a new president into the House of Representatives under the rules of the Twelfth Amendment.

The scheme involved having some Democratic electors vote for former Secretary of State Colin Powell (which did happen), making him the third-place vote-getter in the Electoral College and thus eligible for selection by the House. But the plan fizzled when enough of Trump’s electors stayed loyal to their candidate to officially make him President.

After that, Trump’s opponents turned to the Russia-gate investigation as the vehicle to create the conditions for somehow nullifying the election, impeaching Trump, or at least weakening him sufficiently so he could not take steps to improve relations with Russia.

In one of her text messages to Strzok, Page made reference to a possible Watergate-style ouster of Trump, writing: “Bought all the president’s men. Figure I needed to brush up on watergate.”

As a key feature in this oust-Trump effort, Democrats have continued to lie by claiming that “all 17 U.S. intelligence agencies concurred” in the assessment that Russia hacked the Democratic emails last year on orders from President Vladimir Putin and then slipped them to WikiLeaks to undermine Hillary Clinton’s campaign.

That canard was used in the early months of the Russia-gate imbroglio to silence any skepticism about the “hacking” accusation, and the falsehood was repeated again by a Democratic congressman during Wednesday’s hearing of the House Judiciary Committee.

But the “consensus” claim was never true. In May 2017 testimony, President Obama’s Director of National Intelligence James Clapper acknowledged that the Jan. 6 “Intelligence Community Assessment” was put together by “hand-picked” analysts from only three agencies: the CIA, FBI and National Security Agency.

Biased at the Creation

And, the new revelations of high-level FBI bias puts Clapper’s statement about “hand-picked” analysts in sharper perspective, since any intelligence veteran will tell you that if you hand-pick the analysts you are effectively hand-picking the analysis.

Although it has not yet been spelled out exactly what role Strzok and Page may have had in the Jan. 6 report, I was told by one source that Strzok had a direct hand in writing it. Whether that is indeed the case, Strzok, as a senior FBI counterintelligence official, would almost surely have had input into the selection of the FBI analysts and thus into the substance of the report itself. [For challenges from intelligence experts to the Jan. 6 report, see Consortiumnews.com’s “More Holes in the Russia-gate Narrative.“]

If the FBI contributors to the Jan. 6 report shared Strzok’s contempt for Trump, it could explain why claims from an unverified dossier of Democratic-financed “dirt” on Trump, including salacious charges that Russian intelligence operatives videotaped Trump being urinated on by prostitutes in a five-star Moscow hotel, was added as a classified appendix to the report and presented personally to President-elect Trump.

Though Democrats and the Clinton campaign long denied financing the dossier – prepared by ex-British spy Christopher Steele who claimed to rely on second- and third-hand information from anonymous Russian contacts – it was revealed in October 2017 that the Democratic National Committee and the Clinton campaign shared in the costs, with the payments going to the “oppo” research firm, Fusion GPS, through the Democrats’ law firm, Perkins Coie.

Bruce Ohr has since been demoted and Strzok was quietly removed from the Russia-gate investigation last July although the reasons for these moves were not publicly explained at the time.

Still, the drive for “another Watergate” to oust an unpopular – and to many insiders, unfit – President remains at the center of the thinking among the top mainstream news organizations as they have scrambled for Russia-gate “scoops” over the past year even at the cost of making serious reporting errors.

Since the Jan. 6 report alleged that WikiLeaks received the “hacked” emails from Russia — a claim that WikiLeaks and Russia deny — the story seemed to finally tie together the notion that the Trump campaign had at least indirectly colluded with Russia.

This new “evidence” spread like wildfire across social media. As The Intercept’s Glenn Greenwald wrote in an article critical of the media’s performance, some Russia-gate enthusiasts heralded the revelation with graphics of cannons booming and nukes exploding.

But the story soon collapsed when it turned out that the date on the email was actually Sept. 14, 2016, i.e., the day after WikiLeaks released the batch of DNC emails, not Sept. 4. It appeared that “Erickson” – whoever he was – had simply alerted the Trump campaign to the public existence of the WikiLeaks disclosure.

Greenwald noted, “So numerous are the false stories about Russia and Trump over the last year that I literally cannot list them all.”

Yet, despite the cascade of errors and grudging corrections, including some belated admissions that there was no “17-intelligence-agency consensus” on Russian “hacking” – The New York Times made a preemptive strike against the new documentary evidence that the Russia-gate investigation was riddled with conflicts of interest.

The Times’ lead editorial on Wednesday mocked reporters at Fox News for living in an “alternate universe” where the Russia-gate “investigation is ‘illegitimate and corrupt,’ or so says Gregg Jarrett, a legal analyst who appears regularly on [Sean] Hannity’s nightly exercise in presidential ego-stroking.”

Though briefly mentioning the situation with Strzok’s text messages, the Times offered no details or context for the concerns, instead just heaping ridicule on anyone who questions the Russia-gate narrative.

“To put it mildly, this is insane,” the Times declared. “The primary purpose of Mr. Mueller’s investigation is not to take down Mr. Trump. It’s to protect America’s national security and the integrity of its elections by determining whether a presidential campaign conspired with a foreign adversary to influence the 2016 election – a proposition that grows more plausible every day.”

The Times fumed that “roughly three-quarters of Republicans still refuse to accept that Russia interfered in the 2016 election – a fact that is glaringly obvious to everyone else, including the nation’s intelligence community.” (There we go again with the false suggestion of a consensus within the intelligence community.)

The Times also took to task Sen. Lindsey Graham, R-South Carolina, for seeking “a Special Counsel to investigate ALL THINGS 2016 – not just Trump and Russia.” The Times insisted that “None of these attacks or insinuations are grounded in good faith.”

But what are the Times editors so afraid of? As much as they try to insult and intimidate anyone who demands serious evidence about the Russia-gate allegations, why shouldn’t the American people be informed about how Washington insiders manipulate elite opinion in pursuit of reversing “mistaken” judgments by the unwashed masses?

Do the Times editors really believe in democracy – a process that historically has had its share of warts and mistakes – or are they just elitists who think they know best and turn away their noses from the smell of working-class people at Walmart?

The late investigative reporter Robert Parry broke many of the Iran-Contra stories for The Associated Press and Newsweek in the 1980s.  After AP and Newsweek spiked his stories critical of U.S. foreign policy, Parry started a consortium for other journalists whose reporting was suppressed and named it Consortium News in 1995.