“Putin’s America,” tweeted Anand Giridharadas, a pundit who was genetically engineered in a Monsanto laboratory to appeal to NPR listeners on every possible level.

Giridharadas used these words to caption a short video clip of two tanks being carted through the streets of D.C. in preparation for their appearance in a parade for Independence Day, a holiday in which Americans gather to eat hot dogs and drink Mountain Dew in celebration of the anniversary of their lateral transfer from monarchy to corporatist oligarchy.

The military hardware parade is taking place at the behest of President Bolton’s social media assistant Donald Trump, and critics have been vocally decrying it as alien and un-American. Pundits like Giridharadas and Steve Silberman have been saying it’s something Russia would do. The Independent said it’s a spectacle you’d see in “authoritarian regimes such as North Korea, Iran and China.” Adam Best and Charles Pierce both likened it to something that would be done in a “banana republic,” an interesting choice of phrase for a gratuitous display of American military bravado given that term’s blood-soaked origins in U.S. corporate colonialism.

All of these people are of course being ridiculous. There’s nothing alien or un-American about Trump’s parade at all. Jingoistic fetishization of the military is as American as a deep-fried trademark symbol.

All this parade is, actually, is just one of the many times over the last two and a half years that Trump has shown America its true face, and Americans haven’t liked what they’ve seen.

“That’s not my reflection!” the Americans scream at the mirror he holds up for them. “That’s Putin!”

“That’s not my reflection!” they protest. “That’s North Korea!”

“That’s not my reflection!” they say. “That’s a banana republic!”

No, America. That’s you. It’s been you all along.

This is the same country, after all, in which someone simply mentioning that they were in the armed forces often elicits a reverent “Oh, thank you for your service!” from whoever happens to hear them, as though spending four years protecting Raytheon profit margins and crude oil is something ordinary civilians should be grateful for. You guys know no other country does that, right? In Australia if you tell someone you were in the army they’ll tell you “Aww, bonza mate. I’m a plumber meself.” It’s not a thing, because when you’re not part of the most powerful military force in the history of civilization, powerful people don’t have nearly as much invested in making a thing out of it.

This is the same country where every second house and every single McDonald’s has its flag flying over it, a cult of idolatry that’s become so ubiquitous that a football player choosing to kneel instead of stand before that stupid piece of cloth generates national outrage. The same country where simply bleating “Support the troops!” or “Freedom isn’t free!” was in and of itself seen as a be-all, end-all debate-winning argument for the rape of Iraq. The same country that spent weeks on end mourning the death of bloodthirsty psychopath John McCain on the grounds that he’s a “war hero” when they should have loaded his heartless cadaver onto a trebuchet and launched it into the nearest tire fire as part of a telethon benefit for Syria.

All that’s considered perfectly normal by mainstream America, and liberals are getting their knickers in a knot over a few tanks and “Blue Angels” (another ridiculous yet perfectly normalized American spectacle)? Hell, it’s not even like Trump invented presidential parades full of instruments of mass military slaughter.

Check out this photo from JFK’s inaugural parade: 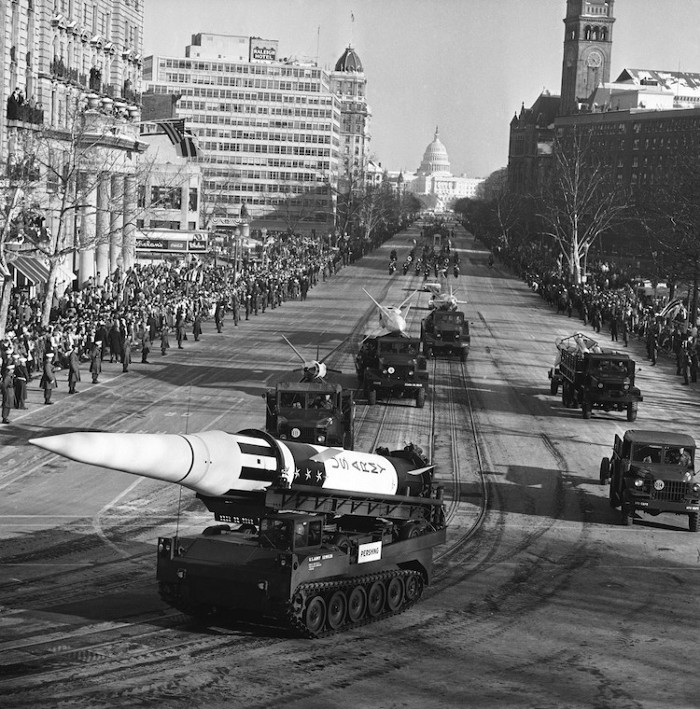 Or this one from Eisenhower’s: 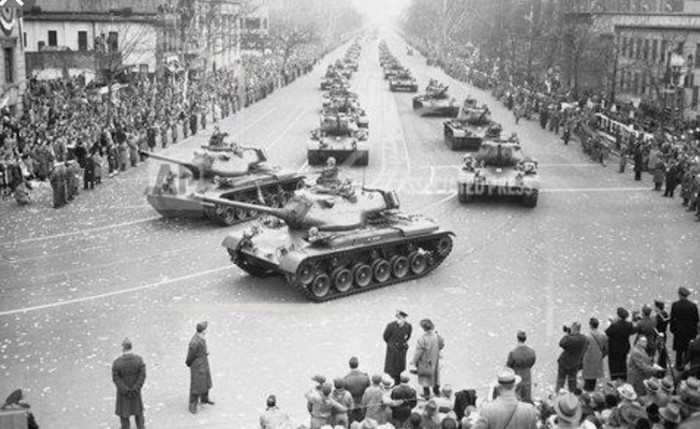 Or this one from FDR’s: 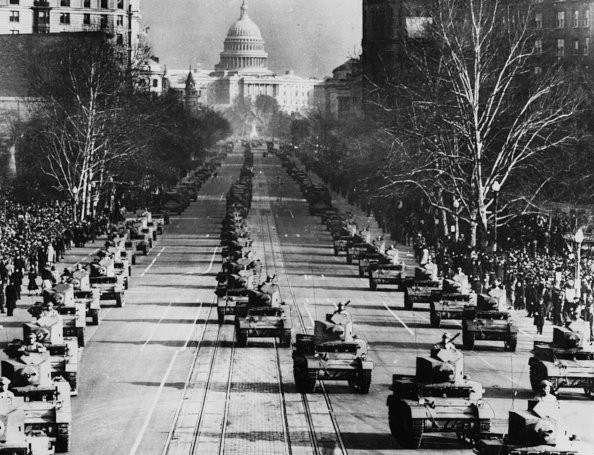 And the fact that it’s mostly Democrats kvetching about this parade is especially absurd, given that in 2019 they’ve somehow managed to become even more hawkish and jingoistic than the Republicans. This is the same crowd that just the other day was attacking Trump for having the audacity to meet with Kim Jong-Un, the same crowd that’s constantly accusing Trump of being weak on Syria and Afghanistan, the same crowd that’s made heroes of the U.S. intelligence community and the “grownups in the room” generals in the administration, and the same crowd that’s been shrieking hysterically for the last three years demanding greater and greater escalations against a nuclear superpower. The biggest problem with Trump’s tank parade will be that male Democrats in attendance will have trouble hiding their erections.

Americans are the most aggressively propagandized people in the world, and U.S. service personnel are the most aggressively propagandized people in America. That’s the group that all this special reverence and fetishization has been attached to: a bunch of kids who’ve been manipulated into killing and dying for plutocratic investments and the mommy-shaped hole in John Bolton’s heart. That’s what this parade is meant to manufacture even more support for in a culture that is saturated past the brim in a relentless barrage of war propaganda.