Donald Trump will ultimately have to remind his national security adviser and secretary of state who is president if there’s to be progress on North Korea, says Ray McGovern.

There is hope for some real progress in U.S.-North Korean relations after Sunday morning’s unscheduled meeting between President Donald Trump and North Korean leader Kim Jong-Un, largely because Russia and China seem more determined than ever to facilitate forward movement.

Sitting down before the talks began, Kim underlined the importance of the meeting.“I hope it can be the foundation for better things that people will not be expecting,” he said. “Our great relationship will provide the magical power with which to overcome hardships and obstacles in the tasks that need to be done from now on.”

“We’ve developed a very good relationship and we understand each other very well. I do believe he understands me, and I think I maybe understand him, and sometimes that can lead to very good things.”

Trump said the two sides would designate teams, with the U.S. team headed by special envoy Stephen Biegun under the auspices of Secretary of State Mike Pompeo, to start work in the next two to three weeks. “They’ll start a process, and we’ll see what happens,” he said.

Russian President Vladimir Putin and Chinese President Xi Jinping, who met individually with President Trump at the G20 in Osaka, have been singing from the same sheet of Korea music — particularly in the wake of Xi’s visit to North Korea on June 20-21. Putin’s remarks are the most illuminating.

In an interview with The Financial Times, Putin pointed to “the tragedies of Libya and Iraq” — meaning, of course, what happened to each of them as they lacked a nuclear deterrent. Applying that lesson to North Korea, Putin said,

“What we should be talking about is not how to make North Korea disarm, but how to ensure the unconditional security of North Korea and how to make any country, including North Korea, feel safe and protected by international law. …”

“We should think about guarantees, which we should use as the basis for talks with North Korea. We must take into account the dangers arising from … the presence of nuclear weapons,” he said, adding that if a way can be found to satisfy North Korea’s understandable determination to protect its security, “the situation may take a turn nobody can imagine today.”

“Whether we recognize North Korea as a nuclear power or not, the number of nuclear charges it has will not decrease. We must proceed from modern realities …” And those realities include fundamental, immediate security concerns for both Russia and China. Putin put it this way:

”[W]e have a common border, even if a short one, with North Korea, therefore, this problem has a direct bearing on us. The United States is located across the ocean … while we are right here, in this region, and the North Korean nuclear range is not far away from our border. This why this concerns us directly, and we never stop thinking about it.”

Last week in Pyongyang, Chinese President Xi Jinping saidChina is waiting for a desired response in stalled nuclear talks with the United States.

“North Korea would like to remain patient, but it hopes the relevant party will meet halfway with North Korea to explore resolution plans that accommodate each other’s reasonable concerns,” he said.

A commentary in China’s official Xinhua news agency said China could play a unique role in breaking the cycle of mistrust between North Korea and the U.S, but that both sides “need to have reasonable expectations and refrain from imposing unilateral and unrealistic demands.” 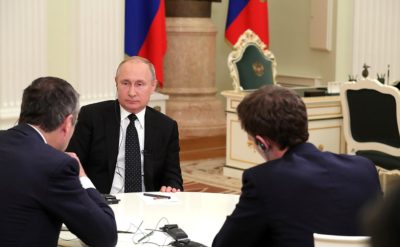 There is little doubt that the Russians and Chinese have been comparing notes on what they see as a potentially explosive (literally) problem in their respective backyards, the more so inasmuch as the two countries have become allies in all but name.

On a three-day visit to Moscow in early June, President Xi spoke of his “deep personal friendship” with Putin, with whom he has “met nearly 30 times in the past six years.” For his part, Putin claimed “Russian-Chinese relations have reached an unprecedented level. It is a global partnership and strategic cooperation.”

Whether they are “best friends” or not, the claim of unprecedented strategic cooperation happens to be true — and is the most fundamental change in the world strategic equation in decades. Given the fear they share that things could get out of hand in Korea with the mercurial Trump and his hawkish advisers calling the shots, it is a safe bet that Putin and Xi have been coordinating closely on North Korea.

The next step could be stepped-up efforts to persuade Trump that China and Russia can somehow guarantee continued nuclear restraint on Pyongyang’s part, in return for U.S. agreement to move step by step — rather than full bore — toward at least partial North Korean denuclearization — and perhaps some relaxation in U.S. economic sanctions. Xi and Putin may have broached that kind of deal to Trump in Osaka.

There is also a salutary sign that President Trump has learned more about the effects of a military conflict with North Korea, and that he has come to realize that Pyongyang already has not only a nuclear, but also a formidable conventional deterrent: massed artillery.

“There are 35 million people in Seoul, 25 miles away,” Trump said on Sunday. “All accessible by what they already have in the mountains. There’s nothing like that anywhere in terms of danger.” 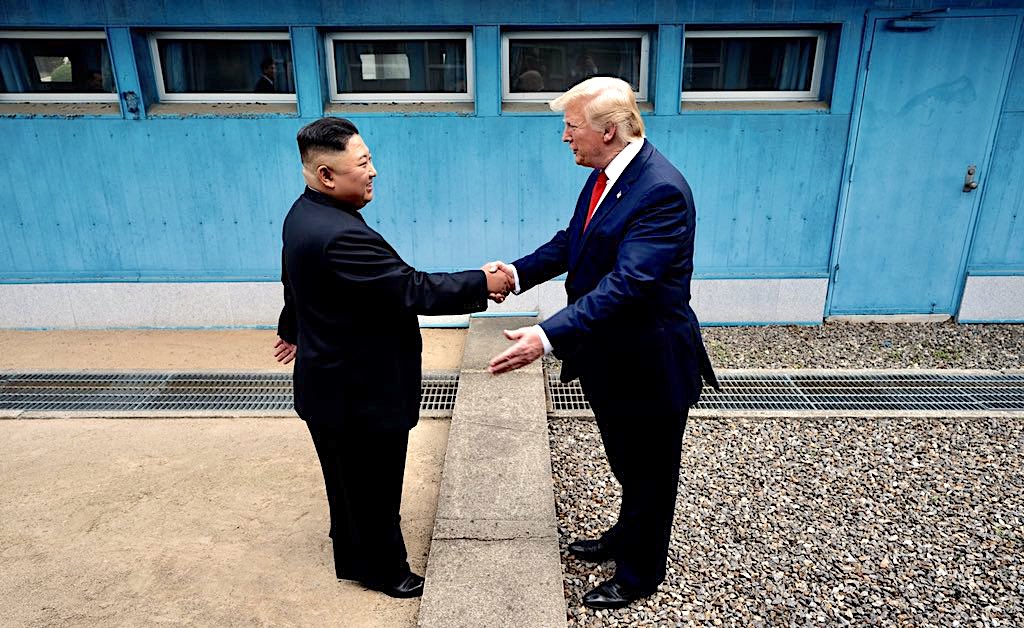 Trump will have to remind his national security adviser, John Bolton, and Secretary of State Mike Pompeo, that he is the president and that he intends to take a firmer grip on reins regarding Korean policy. Given their maladroit performance on both Iran and Venezuela, it would, at first blush, seem easy to jettison the two super-hawks.

But this would mean running afoul of the Military-Industrial-Congressional-Intelligence-Media-Academe-Think-Tank (MICIMATT) complex, in which the corporate-controlled media play thesine-qua-non role today.

In a harbinger of things to come, The Washington Post’s initial report on the outcome of the Trump-Kim talks contained two distortions: “Trump … misrepresented what had been achieved, claiming that North Korea had ceased ballistic missile tests and was continuing to send back remains of U.S. servicemen killed in the Korean War.”

The Trump administration could reasonably call that “fake news.” True, North Korea tested short-range ballistic missiles last spring, but Kim’s promise to Trump was to stop testing strategicnot tactical missiles, and North Korea has adhered to that promise. As for the return of the remains of U.S. servicemen: True, such remains that remain are no longer being sent back to the U.S., but it was the U.S. that put a stop to that after the summit in Hanoi failed.

We can surely expect more disingenuous “reporting” of that kind.

Whether Trump can stand up to the MICIMATT on Korea remains to be seen. There is a huge amount of arms-maker-arms-dealer profiteering going on in the Far East, as long as tensions there can be stoked and kept at a sufficiently high level.

Ray McGovern works with Tell the Word, a publishing arm of the ecumenical Church of the Saviour in inner-city Washington. His first portfolio at CIA was referent-analyst for Soviet policy toward China, Korea, Vietnam, and Japan. In retirement he co-founded Veteran Intelligence Professionals for Sanity (VIPS).

← Power Versus the Press: The Extradition Cases of Pinochet & Assange
Echoes of FDR in Trump’s Bid for Palestinian Surrender →

104 comments for “RAY McGOVERN: Hope for a Breakthrough in Korea”