Donald Trump was kept in the dark about a possible U.S. nuclear response to a Russian cyber-weapon attack. The U.S. has now ramped up offensive cyber-warfare against Russia’s power grid, putting Trump in a deep bind, says Caitlin Johnstone.

The New York Times has published an anonymously sourced report titled “U.S. Escalates Online Attacks on Russia’s Power Grid” about the “placement of potentially crippling malware inside the Russian system at a depth and with an aggressiveness that had never been tried before” which could potentially “plunge Russia into darkness or cripple its military,” with one anonymous official reporting that “We are doing things at a scale that we never contemplated a few years ago.”

Obviously this is yet another serious escalation in the continually mounting series of steps that have been taken into a new cold war between the planet’s two nuclear superpowers. Had a report been leaked to Russian media from anonymous Kremlin officials that Moscow was escalating its cyber-aggressions against America’s energy grid, this would doubtless be labeled an act of war by the political/media class of the US and its allies with demands for immediate retaliation.

To put this in perspective, The New York Times reported last year that the Pentagon was pushing for the U.S. Nuclear Posture Review to include the strategy of retaliating against serious Russian cyberattacks on American power grids with nuclear weapons. 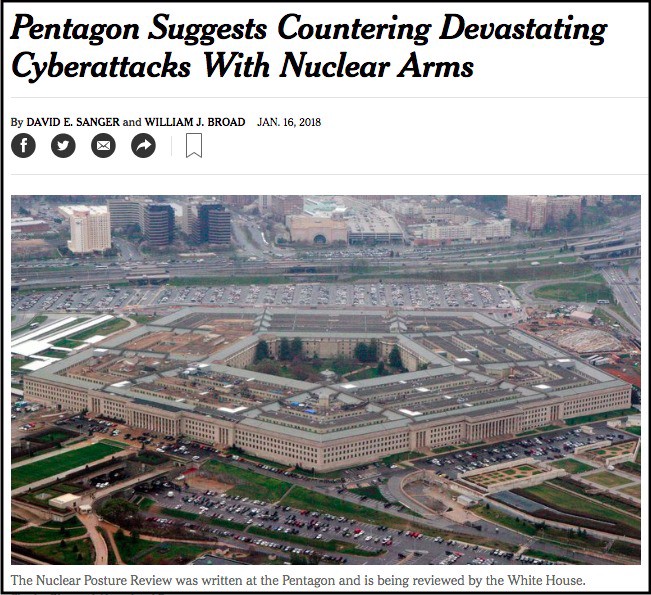 ← 7 Reasons to Doubt US Version of Gulf-of-Oman Incident
Behind the Syrian Network for Human Rights: An Opposition Front Group is a Go-to Monitor for Western Media →