Given Pompeo’s regime-change agenda for Iran, Caitlin Johnstone pours cold water over his version of events. 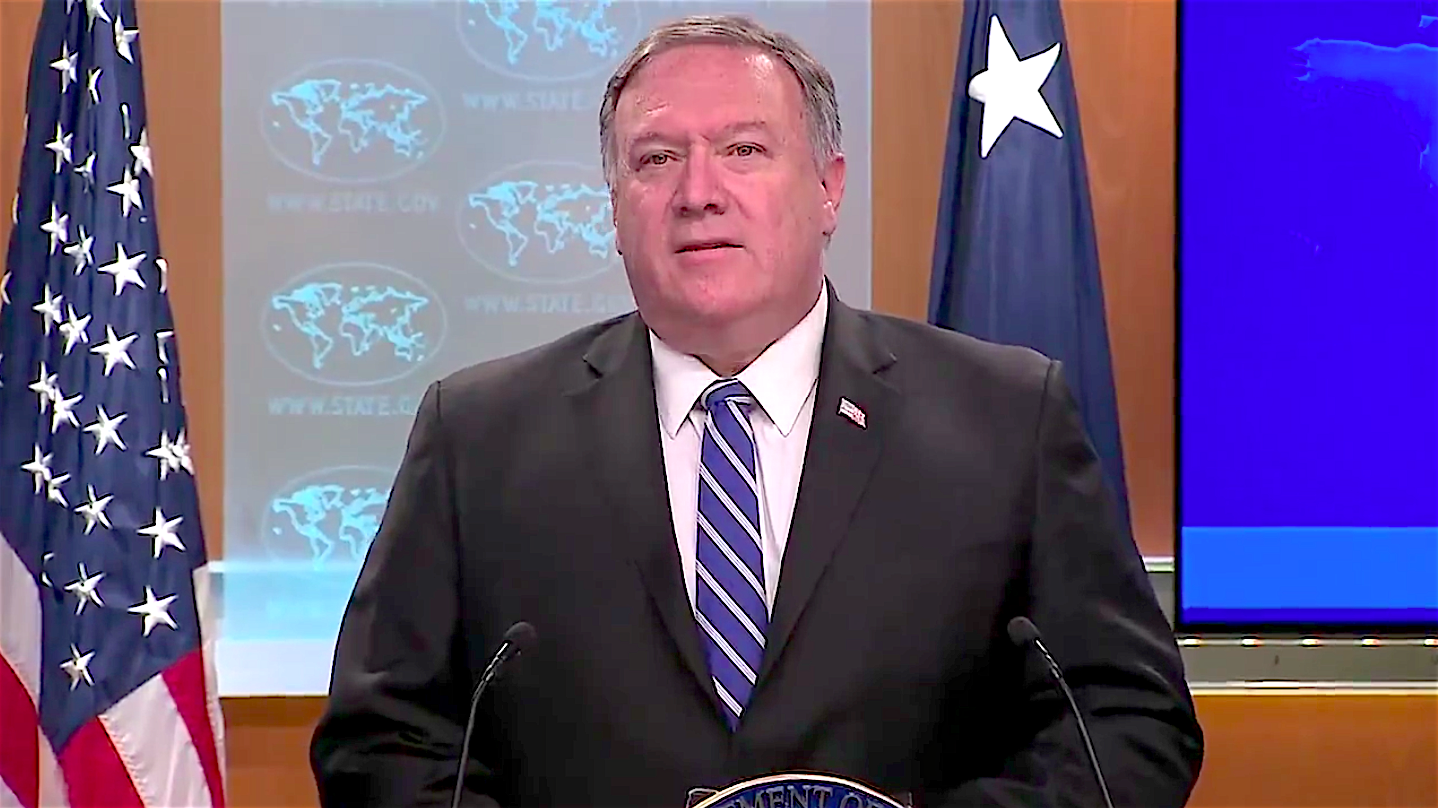 In a move that surprised exactly zero people, Secretary of State Mike Pompeo has wasted no time  scrambling to blame Iran for damage done to two sea vessels in the Gulf of Oman on Thursday, citing exactly zero evidence.

“This assessment is based on intelligence, the weapons used, the level of expertise needed to execute the operation, recent similar Iranian attacks on shipping, and the fact that no proxy group operating in the area has the resources and proficiency to act with such a high-degree of sophistication,” Pompeo told the press in a statement.

“The United States will defend its forces, interests, and stand with our partners and allies to safeguard global commerce and regional stability. And we call upon all nations threatened by Iran’s provocative acts to join us in that endeavor,” Pompeo concluded before hastily shambling off, taking exactly zero questions.

"It is the assessment of the U.S. government that Iran is responsible for today's attacks in the Gulf of Oman…."@StateDept @SecPompeo pic.twitter.com/sTIB0p1kCE

Here are seven reasons to be extremely skeptical of everything Pompeo said:

No. 1: Pompeo is a known liar, especially when it comes to Iran.

Pompeo has a well-established history of circulating blatant lies about Iran. He recently told an audience at Texas A&M University that when he was leading the CIA, “We lied, we cheated, we stole. We had entire training courses.”

No. 2: The US empire is known to use lies and false flags to start wars.

The U.S.-centralized power alliance has an extensive and well-documented history of advancing preexisting military agendas using lies, false flags and psyops to make targeted governments appear to be the aggressors. This is such a well-established pattern that “Gulf of Tonkin” briefly trended on Twitter after the Gulf of Oman incident. Any number of government agencies could have been involved from any number of the nations in this alliance, including the U.S., the U.K., Saudi Arabia, the UAE or Israel.

I wrote an article about this last month because the Trump administration had already begun rapidly escalating against Iran in ways that happen to align perfectly with the longtime agendas of Trump’s psychopathic Iran hawk National security adviser. At that time people were so aware of the possibility that Bolton might involve himself in staging yet another Middle Eastern war based on lies that The Onion was already spoofing it.

On a December 2010 episode of Fox News’ “Freedom Watch,” Bolton and the show’s host Andrew Napolitano were debating about recent WikiLeaks publications, and naturally the subject of government secrecy came up.

“Now I want to make the case for secrecy in government when it comes to the conduct of national security affairs, and possibly for deception where that’s appropriate,” Bolton said. “You know Winston Churchill said during World War Two that in wartime truth is so important it should be surrounded by a bodyguard of lies.”

“Do you really believe that?” asked an incredulous Napolitano.

“You would lie in order to preserve the truth?”

“If I had to say something I knew was false to protect American national security, I would do it,” Bolton answered.

This would be the same John Bolton who has been paid exorbitant speaking fees by the pro-regime change MEK terror cult, promising the cult in a 2017 speech that they’d be celebrating regime change in Tehran together before 2019. This would also be the same John Bolton who once threatened to murder an OPCW official’s children if he didn’t stop getting in the way of his Iraq war agenda.

No. 4: Using false flags to start a war with Iran is already an established idea in the DC swamp.

Back in 2012 at a forum for the Washington Institute of Near East Policy think tank, the group’s Director of Research Patrick Clawson openly talked about the possibility of using a false flag to provoke a war with Iran, citing the various ways the U.S. has done exactly that with its previous wars.

“I frankly think that crisis initiation is really tough, and it’s very hard for me to see how the United States president can get us to war with Iran,” Clawson began.

“So if, in fact, the Iranians aren’t going to compromise, it would be best if somebody else started the war,” Clawson continued. “One can combine other means of pressure with sanctions. I mentioned that explosion on August 17th. We could step up the pressure. I mean look people, Iranian submarines periodically go down. Some day, one of them might not come up. Who would know why? [Smattering of sociopathic laughter from the crowd.] We can do a variety of things, if we wish to increase the pressure (I’m not advocating that) but I’m just suggesting that this is not an either/or proposition  —  just sanctions have to succeed or other things. We are in the game of using covert means against the Iranians. We could get nastier at that.”

No. 5: The US State Department has already been running psyops to manipulate the public Iran narrative.

State Department officials admitted to congressional staff at a closed-door meeting on Monday that a $1.5 million troll farm had gone “beyond the scope of its mandate” by aggressively smearing American critics of the Trump administration’s Iran policy as propagandists for the Iranian government, according to a new report from The Independent. That “mandate” had reportedly consisted of “countering propaganda from Iran,” also known as conducting anti-Iran propaganda.

“Critics in Washington have gone further, saying that the programme resembled the type of troll farms used by autocratic regimes abroad,” says The Independent.

“One woman behind the harassment campaign, a longtime Iranian-American activist, has received hundreds of thousands of dollars from the State Department over the years to promote ‘freedom of expression and free access to information,’” the report reads.

No. 6: The Gulf of Oman narrative makes no sense.

Here we go again. US Empire creating a pretext to go to war with Iran. It makes no sense that Iran would provoke a war with US Empire while Iran tries to salvage the nuclear deal with Europe. This situation looks manufactured as hell. The pro-war US media can’t wait to sell this.

One of the ships damaged in the attacks was Japanese-owned, and the other was bound for Japan. This happened just as Japanese Prime Minister Shinzo Abe was in Tehran attempting to negotiate a de-escalation between the U.S. and Iran with Trump’s blessing, and just after Iran had released a prisoner accused of conducting espionage for the U.S. in what many took to be a gesture of good faith.

Iran has been conducting itself with remarkable restraint in the face of relentless sanctions and provocations from the U.S. and its allies. It wouldn’t make much sense for it to suddenly abandon that restraint with attacks on sea vessels, then rescue their crew, then deny perpetrating the attacks, during a time of diplomatic exchanges and while trying to preserve the nuclear deal with Europe. If Tehran did perpetrate the attacks in order to send a strong message to the Americans, it would have been a very mixed message sent in a very weird way with very odd timing.

No. 7: Even if Iran did perpetrate the attack, Pompeo would still be lying.

Pompeo’s statement uses the words “unprovoked” twice and “Iran’s provocative acts” once, explicitly claiming that the U.S. empire was just minding its own business leaving Iran alone when it was attacked out of the blue by a violent aggressor. Sometimes the things put out by the U.S. State Department feel like they’re conducting experiments on us, just to test the limits of our stupidity.

As noted in this article by Moon of Alabama and this discussion on the Ron Paul Liberty Report, the U.S. has been provoking Iran with extremely aggressive and steadily tightening sanctions, which means that even if Tehran is behind the attacks, it would not be the aggressor and the attacks would most certainly not have been “unprovoked.” Economic sanctions are an act of war; if China were to do to America’s economy what America is doing to Iran’s, the U.S. would be in a hot war with China immediately. It could technically be possible that Iran is pushing back on U.S. aggressions and provocations, albeit in a strange and neoconservatively convenient fashion.

Either way, we have seen exactly zero evidence supporting Pompeo’s claims, so anyone you see hastening to blame Iran for the Gulf of Oman incident is either a war whore or a slobbering moron, or both. Knowing what we know about the U.S.-centralized empire and its pre-existing regime change agenda against Iran, there is no reason to believe Pompeo and many reasons not to.

← John Pilger: The Global War on Assange, Journalism & Dissent
The Danger of Leaving a President Out of the Loop →