The refurbished peace boat set sail on May 1, with its first leg taking it to Hawaii, reports Colonel Ann Wright.

A refurbished peace boat that left the coast of California 61 years ago on a historic quest  to disrupt U.S. nuclear testing  in the Marshall Islands is back at sea.

The Veterans for Peace boat, the Golden Rule, set sail from San Diego on May 1 on a 15-month voyage scheduled to raise awareness of the continuing, planetary dangers of nuclear weapons. The captain and crew aim to reach Hiroshima, Japan, in time for the Aug. 6, 2020, commemoration the 75th anniversary of the U.S. atomic bombing of that city and of Nagasaki. 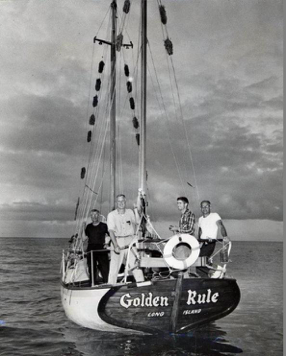 The Golden Rule was found derelict in Humboldt Bay, California, in 2011, by a  shipyard owner, Leroy Zerlang. Two Veterans for Peace chapters in Northern California volunteered to restore it.  With Chuck Dewitt as project manager, many volunteers carried out the work over the next four years.

“We are sailing for a nuclear-free world and a peaceful, sustainable future,” says Gerry Condon, national president of Veterans for Peace. “Now it is time for us to visit the island nations of the Pacific, which have suffered so much damage from nuclear testing and military bases.”

In 1958, the boat’s crew attempted to intervene in U.S. atmospheric nuclear testing in the Marshall Islands by sailing from California to the testing site. There, U.S. nuclear testing from 1946 to 1958 blew up several islands and atolls and radiated many Marshallese who are still suffering from the effects of the nuclear explosions.  The combined explosive power of all the bombs dropped on the Marshall Islands during that 12-year period equals 1.6 Hiroshima-size explosions per day.

The U.S. Coast Guard stopped the 1958 crew twice in Honolulu, Hawaii, where they were arrested and jailed.

While the ship never made it to the Marshall Islands, the attempt drew international publicity to the dangers of atmospheric nuclear testing and helped mobilize citizens throughout the world to put pressure on their governments to stop the testing.  Atmospheric and underwater nuclear testing was finally stopped in 1963 with the signing of the Nuclear Test Ban Treaty by the United States, the Soviet Union and the United Kingdom. The current crew is now bound for their first stop in Hilo, Hawaii. This leg will take approximately three weeks, arriving during the week of May 21. The Golden Rule will stay in the waters around the Big Island of Hawaii for the month of June before heading for the island of Maui in July where she will remain until Aug. 7.

She will visit the small islands of Lanai and Molokai before sailing on to Oahu where she will remain for August, September and October. She will sail to Kauai for the month of November.  In each of the islands, crew members will be speaking in schools and to civic groups.

Hawaiian elder Puna Kalama Dawson flew to San Diego to give an invitation and a blessing for the Golden Rule to come to Hawaii, home to many U.S. military bases.  She thanked Veterans for Peace, the captain and crew for their commitment to peace in the world and for using the vessel as an educational vehicle for discussions about folly of nuclear weapons.

In December 2019, the captain and crew of the Golden Rule will sail to the Marshall Islands. 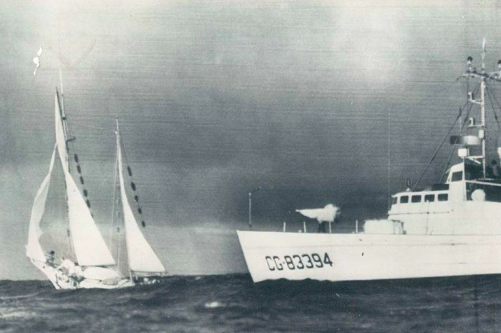 After a month in the Marshall Islands the Golden Rule will sail to Guam where the U.S. military is increasing the size of U.S. Navy, U.S. Marine and U.S. Air Force facilities.  The next stops will be Saipan and Okinawa, sites of many U.S. military bases.

Follow the Golden Rule’s voyage on a map that updates every 10 minutes and with a daily blog. Email the Golden Rule Project to receive the blog link by email. 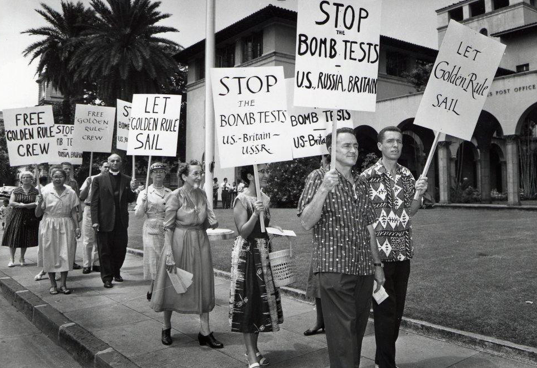 Captaining the Golden Rule from California to Hawaii is Dan Lappala of Hilo, Hawaii. He has been a professional sailor for decades, has owned his own sailing company in Hawaii. This will be his fifth voyage from the West Coast of the U.S. to Hawaii.

First Mate Tom Rogers of Keyport, Washington, is a retired U.S. Navy Captain who was the commander of nuclear submarines.  After he retired from the U.S. Navy, he became a peace activist and is a volunteer with Ground Zero Center for Nonviolent Action, which is near the Trident nuclear submarine base in Bangor, Washington.

The Trident submarine base at Bangor represents the largest concentration of deployed nuclear weapons in the U.S. and is the home port for eight of the Navy’s 14 Trident ballistic missile submarines. The Trident bases at Bangor and Kings Bay, Georgia, together represent just over half of all the nuclear warheads deployed by the United States. When asked why he wants to eliminate nuclear weapons, Rogers said,  “Our kids deserve to grow up in a world without nuclear weapons. It is a failure of our generation that they must live in fear of nuclear annihilation and bear the cost of a massive modernization of our nuclear weapons complex.” 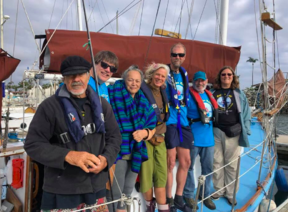 Crewmember Connie Burton, known as “C Be,” is a sailor from Anahole, Kauai, Hawaii. She was taught to sail by Captain Dan in 2002 and has been sailing in Hawaii and Mexico ever since, including the Baha Ha Ha race from San Diego to Cabo. She has crewed on the Hawaiian Chieftain historic sail boat.  She said she enjoys being a part of projects with an important purpose and “trying to inform people about the dangers of the nuclear weapons race is as important as it comes.”  In the 1980s she walked the length of Florida with a group challenging nuclear weapons.

Crewmember Jamie Skinner from La Center, Washington, was a pilot in the U.S. Navy and had a career as an airline pilot.  He is now retired and has extensive sailing experience in the Pacific northwest.  Jamie has been battling cancer, but it is in remission. “I feel it’s a privilege to be a part of the crew on this voyage and I hope to be an advocate for a greater awareness of nuclear disarmament and trying to work towards world peace.”

Alternate crewmember Chris Mayer from Berkeley, California, has helped with a multitude of tasks during the preparation of the boat for the voyage.

For the past two weeks, the Golden Rule operations manager Helen Jaccard has been familiarizing the captain and crew with the Golden Rule.  Jaccard has been sailing on the Golden Rule for the past three years on its voyages along the West Coast of the U.S.  She has been orienting the crew to the communications and navigational equipment, assuring proper rigging for a transpacific crossing, and ensuring that the crew is properly prepared with first aide training, man-overboard drills and providing the food and water needed for the three-week trip.

← Assange to Extradition Court: ‘I Won’t Surrender to the US for Doing Journalism’
Orwellian Cloud Hovers Over Russia-gate →