The idea of “whistleblowing” has been in the news a great deal.

Is the anonymous author of a recent New York Times op-ed eviscerating the president a whistleblower?

Is the victim of an alleged sexual assault by Supreme Court nominee Brett Kavanaugh a whistleblower?

I’m fortunate to have access to the media to talk about torture after blowing the whistle on the CIA’s program. I think Ed Snowden, Tom Drake and others would say the same thing about the aftermath of their own whistleblowing.

Cost of Doing the Right Thing

The problem is that we are the exception to the rule. Most whistleblowers either suffer in anonymity or are personally, professionally, socially and financially ruined for speaking truth to power. Darin Jones is one of those people. He’s one of the people silenced in Barack Obama’s war on whistleblowers. And he continues to suffer under Donald Trump.

Jones was an FBI supervisory contract specialist who in 2012 reported evidence of serious procurement improprieties to his superior. Jones maintained that Computer Sciences Corporation (CSC) had been awarded a $40 million contract improperly because a former FBI official with responsibility for granting the contract then was hired as a consultant at CSC. Jones said, rightly, that this was a violation of the Procurement Integrity Act. He made seven other disclosures alleging financial improprieties in the FBI, and he was promptly fired for his troubles.

Remember, the United States has a Whistleblower Protection Act.  Any federal employee who brings to light evidence of waste, fraud, abuse, illegality, or threats to the public health or public safety is protected under federal statute.

The FBI didn’t care, though. Jones was a troublemaker. He was talking about his fellow FBI agents. And he had to be silenced.

Immediately upon his firing, Jones appealed. He was not reinstated, however, because he had made his revelation to his supervisor and not to one of the nine people on the FBI leadership-approved list of who could hear a whistleblower complaint. Jones appealed again, beginning a more than four-year odyssey.

Sen. Chuck Grassley (R-Iowa) is the champion of whistleblowers on Capitol Hill, whether you like his politics or not. Jones contacted Grassley and asked for help. His dismissal was clearly retaliation for his revelations and was illegal, according to the whistleblower protection law. Grassley agreed and wrote three separate letters to then-FBI director James Comey and then-Deputy Attorney General Sally Yates. None were answered.

Grassley urged the Justice Department to reinstate Jones, saying that his dismissal was a violation of the Whistleblower Protection Enhancement Act of 2016, which strengthened the original whistleblower protection law. He added that when Yates appeared before his Senate Judiciary Committee for her confirmation hearings earlier in the year, she promised “to improve the process for adjudicating claims of retaliation, including expanding the list of persons to whom a protected disclosure may be made.”

She never did that. In fact, Yates ordered the director of the Justice Department’s “Professional Misconduct Review Unit” to write to Jones and to tell him, “The Deputy Attorney General’s review is complete and her decision is final. Your case is no longer pending. You should not expect to receive any future communications that you or any other organization or individuals may submit with regard to your whistleblower reprisal case.” In other words, the official policy of the Justice Department was to ignore the law and to give the Senate Judiciary Committee chairman and the whistleblower himself the middle finger. 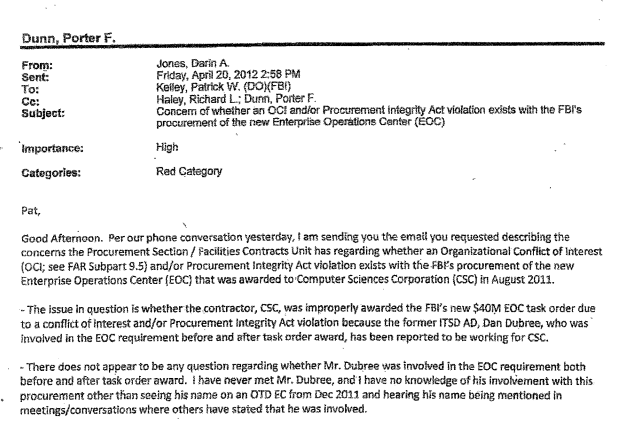 The FBI’s response was equally bad, albeit predictable. The FBI’s Office of the General Counsel wrote to Jones, “The FBI has advised you that it will not conduct further investigation into your allegations that the FBI removed you from employment because you reported a compliance concern and retaliated against you in violation of applicable whistleblower retaliation protection regulations. The FBI has met its legal obligations and considers this matter closed without any basis for further review or reopening. Please be advised that the FBI will not respond to any additional correspondence or emails related to or arising from the termination of your employment.”

Note also that the FBI refers to “whistleblower regulations.” It’s not a regulation. It’s a law. And the FBI, too, has to respect and follow the law even when they don’t want to.

The bottom line here, though, is that Darin Jones did the right thing.  He did the honorable thing. He did the ethical, legal, and moral thing. And he paid for it with his career.  Like other federal whistleblowers, he’s ruined financially. Friends and family members have walked away from him. He can’t find a job. I can tell you from firsthand experience that the psychological weight of the fallout from whistleblowing is sometimes too much to handle.

Jones’ friends and supporters are creating a GoFundMe campaign to help him through this horrible period.

We also need to keep up the heat on the FBI, the CIA, NSA, TSA, and every other governmental organization that victimizes whistleblowers.

We have to support Chuck Grassley and others on Capitol Hill who are trying to protect whistleblowers.

We have to force our own elected officials to do the same. After all, they work for us.

Our goal should be a simple one. Work hard to ensure that Darin Jones is the last federal whistleblower to be treated this way.

15 comments for “How the FBI Silences Whistleblowers”