UPDATED: Israeli forces have violently boarded a ship, being followed by Consortium News, that was headed to Gaza bringing humanitarian aid. A survivor of the USS Liberty is now in Israeli custody.

Israeli soldiers in international waters boarded the Al Awda ship headed to Gaza to deliver relief supplies on Sunday, detaining everyone on board, including a USS Liberty survivor, after beating and tasering some passengers, according to an eyewitness account. 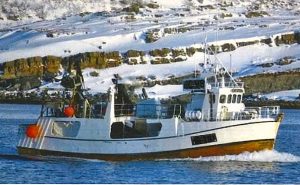 Al Awda leaving Norway in May. (Photo by Elizabeth Murray)

Only two of the 22 passengers on the ship have been released, with the rest being held in Givon prison in Israel, the flotilla’s organizers said on Monday.

One of those released, Zohar Chamberlain Regev, an Israeli citizen, contested an Israeli Defense Force (IDF) statement that the ship had been captured “without exceptional incident.”

“People on board were tasered and hit by masked IOF soldiers. We did not get our passports or belongings before we got off the boat. Do not believe reports of peaceful interception,” Regev said in a statement to the organizers, the Freedom Flotilla Coalition. Regev referred to the IDF derogatorily as the Israeli Occupation Force.

She said she saw “blood on the deck of the Al Awda as the last participants were being dragged off the ship,” according to the coalition’s statement. Regev and a second Israeli passenger, Yonatan Shapira, were charged with attempting to enter Gaza and conspiracy before being released.

Consortium News reported on July 9 that Joe Meadors, a survivor of the 1967 Israeli attack on the USS Liberty,  joined the 2018 Gaza Freedom Flotilla as the delegate from the United States. He boarded the Al Awda  in Palermo, Sicily for  the final 1,000 miles to Gaza and is now in Israeli custody. Meadors pre-recorded this video message in the event that he was captured:

Meadors was a signalman on the bridge of the USS Liberty, a surveillance vessel operating in international waters of the Mediterranean Sea near Gaza during the 1967 Six-Day Arab-Israreli war when it was attacked by Israeli war planes and submarines, killing 34 U.S. sailors.

Speaking of the seizure of the Al Awda, the flotilla organizers said: “A military attack on a civilian vessel is a violent act and a violation of international law. Taking 22 people from international waters to a country which is not their destination constitutes an act of kidnapping, which is also unlawful under the international Convention of the Law of Sea.”

Consortium News has been following the progress of the flotilla in two reports by passenger Elizabeth Murray. Murray left the Al Awda (The Return) before it approached Gaza and was not onboard when it was seized by Israeli forces.

“We call on national governments, civil society and international organizations to demand that Israeli authorities immediately release our boat so that we can deliver our much-needed medical supplies on Al Awda and the fishing boat itself to the rightful recipients in Gaza,” the Flotilla organizers said.

“Our second boat Freedom will follow Al Awda within a day or two, and the Freedom Flotilla will continue until the blockade ends and Palestinians of Gaza regain their full freedom of movement,” they said.

Besides delivering aid, the flotilla’s aim has been to bring attention to the illegal blockade imposed by Israel on Gaza since 2007.

← Ahed Tamimi and Her Mother are Freed from Jail
In Shielding US from Legal Obligations, Kavanaugh Conflates International Law with Foreign Laws →