A survivor of the Israeli attack on the USS Liberty that killed 34 U.S. sailors has joined the Freedom Flotilla headed towards Gaza, as Joe Lauria reports.

Joe Meadors, a survivor of the 1967 Israeli attack on the USS Liberty,  has joined the 2018 Gaza Freedom Flotilla as the delegate from the United States. He will board the Al Awda (The Return), which left Corisca Sunday night for  the final 1,000 miles to Gaza.  Al Awda is one of four boats on the 75-day voyage from Scandinavia.

Meadors was a signalman on the bridge of the USS Liberty, a surveillance vessel operating in international waters of the Mediterranean Sea near Gaza during the 1967 Six-Day Arab-Israreli war. 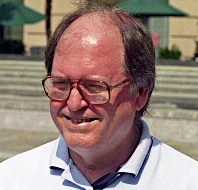 Meadors: From the Liberty to Al-Awda.

“1. That on June 8, 1967, after eight hours of aerial surveillance, Israel launched a two-hour air and naval attack against USS Liberty, the world’s most sophisticated intelligence ship, inflicting 34 dead and 173 wounded American servicemen (a casualty rate of seventy percent, in a crew of 294);

2. That the Israeli air attack lasted approximately 25 minutes, during which time unmarked Israeli aircraft dropped napalm canisters on USS Liberty‘s bridge, and fired 30mm cannons and rockets into our ship, causing 821 holes, more than 100 of which were rocket-size; survivors estimate 30 or more sorties were flown over the ship by a minimum of 12 attacking Israeli planes which were jamming all five American emergency radio channels;

3. That the torpedo boat attack involved not only the firing of torpedoes, but the machine-gunning of Liberty‘s firefighters and stretcher-bearers as they struggled to save their ship and crew; the Israeli torpedo boats later returned to machine-gun at close range three of the Liberty‘s life rafts that had been lowered into the water by survivors to rescue the most seriously wounded;

5. That in attacking USS Liberty, Israel committed acts of murder against American servicemen and an act of war against the United States;

6. That fearing conflict with Israel, the White House deliberately prevented the U.S. Navy from coming to the defense of USS Liberty by recalling Sixth Fleet military rescue support while the ship was under attack; evidence of the recall of rescue aircraft is supported by statements of Captain Joe Tully, Commanding Officer of the aircraft carrier USS Saratoga, and Rear Admiral Lawrence Geis, the Sixth Fleet carrier division commander, at the time of the attack; never before in American naval history has a rescue mission been cancelled when an American ship was under attack… .”

Dean Rusk, U.S. Secretary of State at the time of the incident, wrote: “I was never satisfied with the Israeli explanation. Their sustained attack to disable and sink Liberty precluded an assault by accident or some trigger-happy local commander. Through diplomatic channels we refused to accept their explanations. I didn’t believe them then, and I don’t believe them to this day. The attack was outrageous.”

Meadors and Seaman Francis Brown, who was later killed in the attack, hauled up a second American flag from the bridge after the first was shot down early in the air assault. Meadors remained on the bridge throughout the 25-minute attack and was one of several eyewitnesses to the Israeli machine-gunning of the ship’s life rafts. 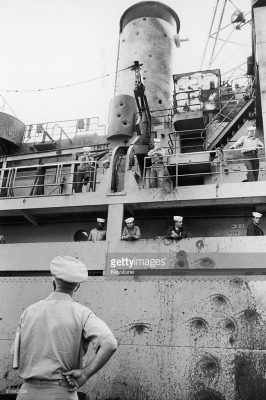 Meadors has described the Israeli attack in detail on the USS Liberty Veteran’s Association website:

“I watched some jets pass us, then turn left after they passed our ship, then they started strafing us. The attack lasted 90 minutes, during which we got a message off to the Sixth Fleet asking for assistance. We learned later that Joe Tully, commanding officer of the USS Saratoga, launched aircraft within minutes of the attack, but he told us later they were recalled before they reached the horizon. We found this out 20 years after the attack.

“The most frustrating thing has been a lack of reaction from the U.S. government. On June 8, 2005, we filed a war crimes report, and they are required to investigate these allegations. They’ve created reports about our mission, but they never did conduct an actual investigation of the attack itself.

“It was an illegal attack. We were on the high seas conducting legal activities. They admitted that they closed the area for military purposes but we tried to find out the boundaries of that area and they wouldn’t tell us.

“The Israelis break international laws with impunity and the U.S. government is not going to hold them accountable, nobody is. There is no doubt that the Israelis were committing piracy on the high seas against the 2010 Gaza Freedom Flotilla and used deadly force against unarmed humanitarians.”

Meadors was aboard the Sfedoni in the 2010 Gaza Freedom Flotilla. He was in Greece for the 2011 and 2015 Freedom Flotillas.  Born in Corpus Christi, Texas, Meadors is a past president of USS Liberty Veterans Association, founded in 1982.

The Flotillas aim to bring attention to the illegal blockade imposed by Israel on Gaza since 2007.

Joe Lauria is editor-in-chief of Consortium News and a former correspondent for the Boston Globe, Wall Street Journal, Sunday Times of London and numerous other publications. He can be reached at joelauria@consortiumnews.com and on Twitter @unjoe .
Post Views: 157