This is the second report from Elizabeth Murray who is aboard a new flotilla to protest the illegality of the 12-year blockade that is choking Gaza.

We are possibly a more motley crew than the passengers aboard the S.S.Minnow in the old U.S. TV series Gilligan’s Island: Among those who have joined us on one or more legs of the journey to Gaza as part of the Freedom Flotilla Coalition (FFC) are activists hailing from Spain, Israel, Norway, Malaysia, Canada (First Nations), Denmark and the United States.

Despite our diverse ages and backgrounds we have some important things in common:  minds that comprehend the crimes and human rights violations being committed daily against the people of the Israeli-occupied Palestinian territories; hearts that feel deeply the pain of those whose basic freedoms have been denied for 70 years; and consciences that want to find a nonviolent way to reach out to these people, right the wrongs of the Gaza blockade, and achieve a measure of justice.

Political representatives have failed repeatedly through a lack of the political and moral courage to secure justice for a people facing 70 years of sustained, brutal subjugation by a foreign power, Israel. Thus the international Freedom Flotilla Coalition (FFC) sails again. 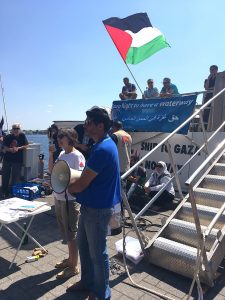 This time the FFC will not attempt to deliver medical supplies or foodstuffs to the suffering people of Gaza. Past experience with previous FFC missions indicates that such materials will likely never end up in Gaza, or will arrive in spoiled or damaged condition.  Instead, the Al-Awda will deliver itself – a refurbished Norwegian fishing boat – as a solidarity offering to the fisherman of Gaza. They are shot at and harassed on a daily basis, prevented from feeding their families, and have their fishing boats regularly seized and destroyed by Israel.

There is so much misery in Gaza that could easily be alleviated since nearly all of it is either deliberately manufactured by Israel (such as the bombing of sewage plants, the electricity grid, Gaza harbor, the undrinkable water) or is an immediate by-product of Israeli policy (widespread post-traumatic stress disorder and associated mental illnesses, a spike in the rates of cancer, once extremely rare among Palestinians).

The economic blockade, the restrictions on foodstuffs and construction materials, the travel bans, and the sealed borders are all aided and abetted by Egyptian leader Abdel Fattah al-Sisi, an ally of Israeli Prime Minister Benjamin Netanyahu. Under al-Sisi the Rafah border to Egypt – the only non-Israeli outlet available to the Palestinians of Gaza seeking medical aid or travel abroad – is almost always closed. These blatant violations of human rights and the Geneva Convention have occurred with the complicit wink of the U.S. and Europe, whose weapons manufacturers profit handsomely from their arms sales to Israel.

The relegation of Palestinians to a less-than-human status by Israel, in particular the inhabitants of Gaza who are perpetually locked into an open-air prison and subject to the Israeli blockade, was underscored by MIT professor Noam Chomsky after a 2012 visit to Gaza to attend an academic conference. In comments broadcast by Democracy Now on Nov. 14, 2012, Chomsky remarked:

“It’s kind of amazing … and inspiring to see people managing somehow to survive … as essentially caged animals subject to constant, random, sadistic punishment – only to humiliate them – no pretext. They [the Palestinians] would like to have dignified lives, but the standard Israeli position is that they shouldn’t raise their heads.” 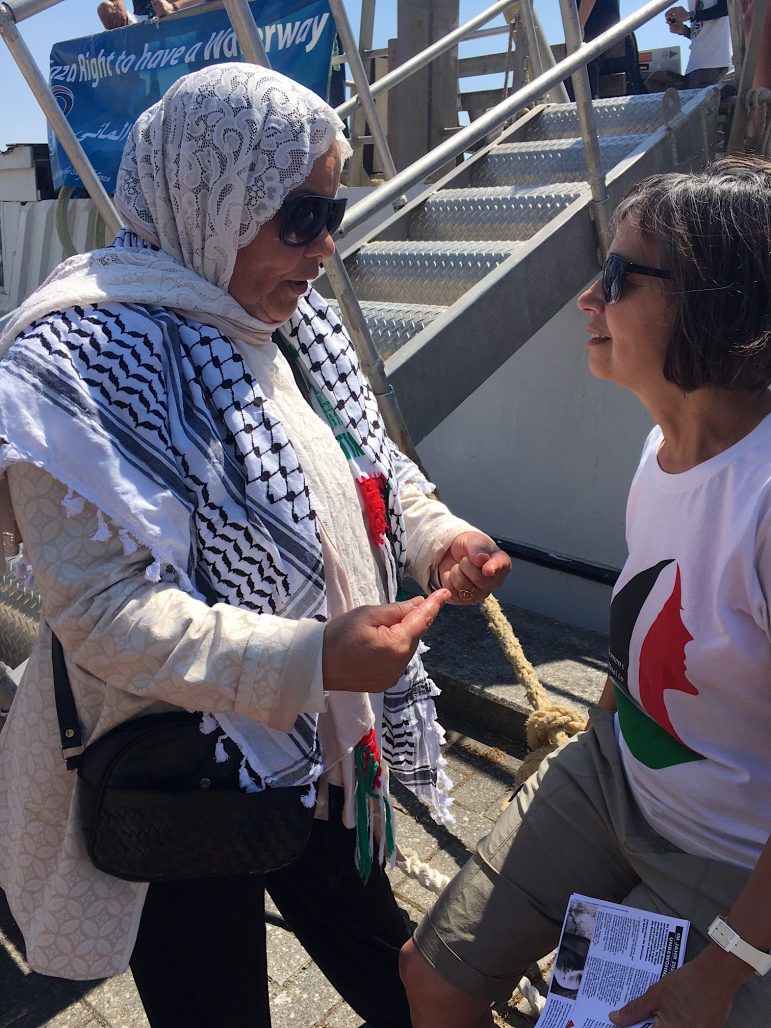 During our ports of call in Germany, visitors to Al-Awda told us that many German politicians as well as ordinary Germans are reluctant to speak out against human rights abuses against Palestinians because they say that if they do, they will be branded as anti-Semitic and possibly have their lives and careers ruined by this smear.

Listening to these German citizens express their solidarity with the FFC mission in passionate, yet hushed tones, one cannot but think back to the suppression of free speech by the Communist-era East German government that was fiercely enforced by the secret police known as the Stasi. One can only deplore  the practice of self-censorship that has become widespread in what is supposed to be a free and democratic, united Germany.  It also underscores the powerful political pressure that Israel brings to bear on many European countries. Of course, Germany’s uniquely evil treatment of Jews historically makes it only natural that Germans would be reluctant to criticize Israel.

Shortly before we departed from Wilhelmshaven, Germany we were visited by Georg, a human rights advocate and photographer affiliated with the “Bundesverband Arbeiterfotographie.” who made the 50-mile road trip from Bremen to take photos, express support and offer a generous personal donation to the Freedom Flotilla mission before rushing back to Bremen to collect his 9-year-old son from school.  He said:  “I rushed over as soon as I heard about you.”

We also met Timo, a German trade union leader and youth organizer, who volunteered his time and talents to take care of some  technical problems aboard the boat. Timo, who also hails from Bremen, spent an entire day driving around to half a dozen specialty maritime and hardware supply stores in Wilhelmshaven to help us obtain the proper parts; he then worked tirelessly until all was “shipshape.” When we offered to compensate him for his time and trouble, he refused, saying:  “Let this be my small contribution toward peace.”

Meanwhile, the Palestinian-German community in Wilhelmshaven showered us with gifts of home-made Palestinian delicacies and serenaded us with singing, dancing and playing of the oud, a classical Palestinian stringed instrument.  They thanked us for making this journey, saying they only wish they could join us and return to their original homes and villages.  Their love and affection for our mission is overwhelming.

In Amsterdam we were feted by local peace and social justice activists who hosted a dinner of traditional Palestinian food.  After a very rough night at sea en route to Amsterdam – during which the Al-Awda tossed and pitched amid enormous swells – we are grateful to be here in calm waters, enjoying the warm hospitality of the local human rights community.

We aim to approach Gaza harbor unimpeded, so that our supporters there can receive us as well.

43 comments for “Flotilla Continues Towards Gaza to Challenge the Blockade”