Ahed Tamimi and her mother were freed from prison on Sunday. Ray McGovern looks back on when he met the Tamimi family last year in their West Bank village and reflects on the spirit that drives them.

When they left prison on Sunday Ahed Tamimi and her mother Nariman received a hard-earned heros’ welcome from Palestinians and others opposed to Israel’s occupation and colonization of Palestinian lands seized in 1948 and enlarged by the Israeli army in 1967.

Ahed was 16 years old last December when an Israeli soldier shot her cousin in the face. The next day Israeli soldiers menacingly showed up at her house in the West Bank village of Nabi Saleh. What would you do?

Ahed slapped one of the armed-to-the-teeth soldiers. While some Israeli politicians said she should be put away for life and others demanded a sentence of at least ten years, the Israeli occupiers sentenced her to eight months for the slap seen around the world. She spent her 17th birthday in prison. Her mother Nariman filmed the incident and was thrown in jail too, this time for incitement. (It was not the activist Nariman’s first time in an Israeli prison.)

The Israeli authorities are so worried about the symbol for resistance that Ahed has become internationally that on Saturday, a day before her release, they arrested two Italian artists who had painted a large portrait of her on the separation wall near Bethlehem. 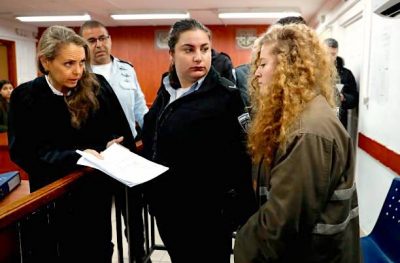 Most Americans — except for the relatively few who have spent more than a few days in Israeli-occupied territories — find it hard to understand why Palestinians like Nariman and Ahed “persist.” Most people in the U.S. are blissfully unaware of the history of Palestine and of the continuing injustices inflicted on its people today. The explanation for this lies largely in the way the U.S. mass media reports the story, almost entirely from the Israelis’ point of view.

For those malnourished on Establishment media, here’s a bit of history, without which it is impossible to understand the anger and the courage-against-all-odds shown by those who continue to use what they have — even their open palms — to make clear that they will never acquiesce in Israeli occupation.

How a Homeland Gets Occupied

The Israeli attack starting the Six-Day War in early June 1967 fits snugly into the category of “war of aggression” as defined by the post-WWII Nuremberg Tribunal.  “Pre-emptive” attacks, when there is nothing to pre-empt, are now — post Iraq war — labeled more euphemistically as “wars of choice,” but that too fits the Nuremberg definition.

To begin to appreciate the injustices inflicted on millions of Palestinians, whose land Israel coveted for itself, one must un-learn the legend that in attacking its neighbors in 1967 Israel was acting in self-defense. None other than then-Prime Minister Menachem Begin (1977 – 83) undermined that piece of propaganda in a speech to the U.S. National Defense University on August 8, 1982.  (Apparently, even accomplished dissimulators get cocky on occasion and let the truth slip out.)  Here are Begin’s words: 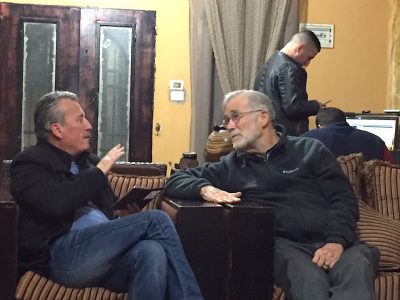 “In June, 1967, we had a choice. The Egyptian Army concentrations in the Sinai approaches do not prove that [President Gamal Abdel)] Nasser was really about to attack us. We must be honest with ourselves. We decided to attack him. … The government decided unanimously: we will take the initiative and attack the enemy, drive him back, and thus assure the security of Israel and the future of the nation.”

And now, a half-century after its successful six-day war of aggression with U.S. backing, Israel has been unlawfully colonizing the occupied territories, oppressing the Palestinians still living there, and thumbing its nose at UN Security Council Resolution 242. It was approved unanimously on Nov. 22, 1967, calling on Israel to withdraw from the lands it seized in June of that year. That was then.

And This is Now …

In February—March 2017, I was part of a a small Veterans For Peace delegation in Palestine. One of our last visits was to a village named Nabi Saleh, where Ahed’s father Bassem Tamimi, his wife Nariman, and Ahed’s three siblings live when they are not in prison. Her older brother is in prison now. After two weeks of experiencing what life is like for Palestinians under Israeli occupation in the West Bank, I had a chance to ask Bassem about the nonviolent, but frontal, resistance to Israeli occupation and colonization.

“Your sons have been beaten and badly wounded and one’s still in prison; your wife is in and out of prison: your brother-in-law was killed by a sniper bullet; you yourself have been tortured in prison; your house is on the list for demolition — why do you persist; why encourage such actions?” I asked.

“We have no alternative,” Bassem replied matter-of-factly, “it is our land and our life. I will not tell my children or my people to acquiesce in the Israeli occupation — ever.” 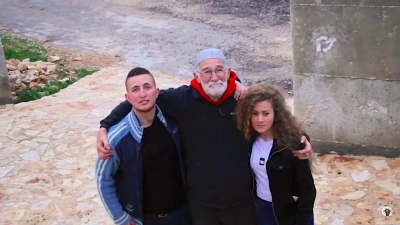 The following day we Veterans For Peace took part in a protest march to the separation Wall. Later, underneath the tear-gas and sheltered from the ensuing rifle fire, we watched the teens of Nabi Saleh dodge the Israeli soldiers chasing them through the village for two hours. When the Israeli soldiers, so heavily burdened with weaponry they could hardly run, finally went back behind their Wall, the young folk emerged shouting, “We won.” It was a privilege to be there to welcome them back to the Tamimi house and some relative peace and quiet.

Chris Smiley, our delegation videographer, created an excellent 38-minute documentary as part of a series on our experience in Nabi Saleh called: “One Day, One Village, One Family.”

The Palestinian Spirit is Universal

Ahed “Didn’t Get It From the Moon”. This is the expression my Irish grandmother would use to make it clear that tribute and praise should go to the seed-sowers as well as the protagonists themselves. Other traditions use some variant of: “The apple does not fall far from the tree.” Suffice it to say that, from what I was able to witness of the attitude and behavior of Ahed and her three brothers, they are clearly determined to honor the rich legacy of courage and Palestinian patriotism they inherit from Bassem and Nariman — and not only from them. 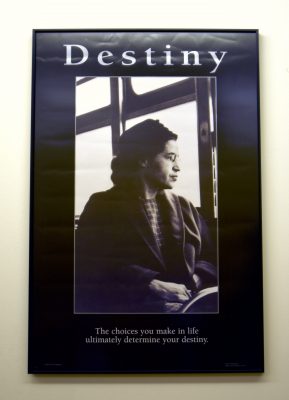 Hanging in meeting room of Arab members of the Knesset.

One might say that Ahed and her siblings are honor graduates of the Bassem/Nariman Folk School, just as Rosa Parks was a graduate of The Highlander Folk School. The common curriculum has to do with courageous persistence in the pursuit of justice. Moreover, our delegation was to discover that Rosa Parks is a revered figure in the Israeli Knesset — well, at least in the modest conference room allocated to Arab members.

Hanging prominently on the main wall were pictures of Rosa Parks, as well as of Rev. Martin Luther King, Jr.  And now I can hear Ahed Tamimi’s voice beneath that of Rosa Parks, who explained in 1992:

“I did not want to be mistreated … It was just time… there was opportunity for me to take a stand to express the way I felt about being treated in that manner. I had not planned to get arrested. … But when I had to face that decision, I didn’t hesitate to do so because I felt that we had endured that too long. The more we gave in, the more we complied with that kind of treatment, the more oppressive it became.”

Miko Peled, son of an Israeli general and critic of Israel’s Palestine policy, shot this video on Sunday and sent it to McGovern.

Ray McGovern works with a publishing arm of the ecumenical Church of the Saviour in inner-city Washington.  A former Army officer and CIA analyst, he was a member of the Veterans For Peace delegation visiting Palestine in early 2017.