As Edward Snowden confirmed beyond doubt, we live in a world where our most intimate moments can be seen by would-be extortioners and, more alarmingly, by our governments, says Annie Machon.

By Annie Machon
in Brussels
Special to Consortium News

Putting aside the fact that I am far more concerned about GCHQ or the NSA hacking my computer (as should we all be), this did rather amuse me.

Apparently, I must pay this “Susana” $1000 via Bitcoin or, shock, have my alleged pleasures shared with my acquaintances. And just last night I received another courteous request for cash from someone calling themselves Jillie Abdulrazak, but the price has now been inflated to $3000.

It is perfectly possible that a rare, unguarded moment of long-distance online love might have been captured (but by whom?). That would probably be over a decade ago and would certainly have been using the old email account which was attached to the particular password at the time.

However, even those memories have been denied me – I distinctly remember that I have been too paranoid for too long and have always covered the built-in computer camera lens. Anything that could possibly have been recorded could only be audio – a saucy phone call at most. There can be no video of my younger self, alas.

I have had good reason to be paranoid. In the late 1990s I supported my former partner and fellow MI5 intelligence officer, David Shalyer, in his whistleblower exploits to expose the crimes and incompetence of the UK spy agencies at the time. This resulted in us literally going on the run across Europe, living in hiding for a year in la France profonde, and another two years in exile in Paris before he voluntarily returned to the UK in 2000 to face the music and inevitably, under the terms of the UK’ draconian 1989 Official Secrets Act, being sent to prison for exposing the crimes of British spies.

From those years, knowing what we knew about the spies’ capabilities even then, the sense of being always potentially watched has never rubbed off. 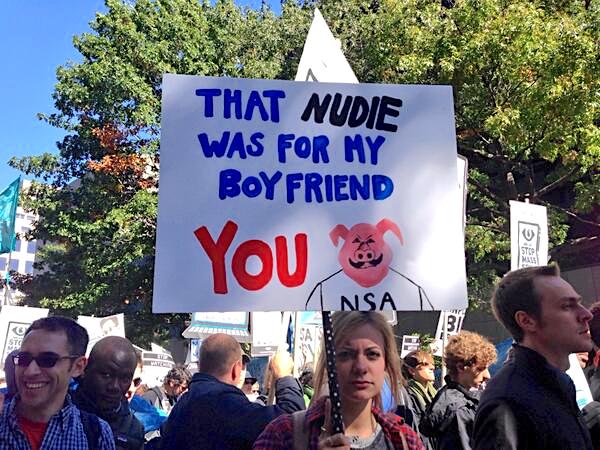 Any possible audio could, I suppose, be spliced in some way to some dodgy video to make this the stuff of a blackmailer’s dreams. That, surely, will be easy to “forensicate” – and indeed I have other friends who can do this, at world class level.

Alternatively, the former love at the time could have recorded the audio for his own nefarious personal usage for some nebulous time in the future. And if that future is now, after he had shown himself a long time ago to be chronically dishonest, why do this in 2018 when we have been separated for years?

Or perhaps this is some type of dark LoveInt operation by the spooks, in some failed attempt to frighten or embarrass me?

But there is, of course, a bigger, more political picture.

Ever since I worked as an intelligence officer for MI5, before going on the run with Shayler during the whistleblowing years in the late 1990s, I have been painfully aware of the tech capabilities of the spies. Even back then we knew that computers could be captured by adversaries and turned against you – keystroke loggers, remote recording via microphones, cameras switched on to watch you, and many other horrors.

The whistleblowing of Edward Snowden back in 2013 has confirmed all this and more on an industrial, global scale – we are all potentially at risk of this particular invasion of our personal privacy. I have kept my computer and mobile camera lenses covered for all these years precisely because of this threat.

One specific Snowden disclosure, which has received little mainstream media traction, was a programme called OPTIC NERVE. This was a GCHQ program (funded by American money) that allowed the spooks to intercept in real time video conferencing calls. It turned out, horror, that 10 percent of them were of a salacious nature, and the spooks were shocked!

I have spoken about privacy and surveillance at conferences around the world and have many, many times had to debate the supposition that “if you are doing nothing wrong, you have nothing to hide.”

However, most people would like to keep their intimate relationships private. In this era of work travel and long distance relationships, more of us might well have intimate conversations and even video play via the internet. In an adult, consensual and mutually pleasurable context, we are doing nothing wrong and we have nothing to hide, but we surely don’t want the spooks to be watching us or listening in, any more than we would want the criminals capturing images and trying to shake us down for money.

This low-level and laughably amateur attempt at extortion is risible. Unfortunately, the threat from our governments spying on us all is not.

← Letter from Britain—Lost in a Brexit Maze: a Baffled Political Class Dreads the Prospect of Jeremy Corbyn
Ahed Tamimi and Her Mother are Freed from Jail →

42 comments for “Living in a World Bereft of Privacy”